Gateway Classic Cars of Atlanta is proud to present this 2006 Ford Mustang GT. If you think the newest generation of the Ford Mustang coupe is great youve gotta love the convertible. Ford has long been credited with a stroke of genius for the creation of the Mustang and thats certainly true again with this retro-styled generation. Redesigned in 2005 the fifth-generation Mustangs styling echoes the famous Mustang models of the late-1960s codenamed S-197. This mustang is equipped an aluminum block 4.6 L SOHC three-valve Modular V8 with variable camshaft timing (VCT) making 300 hp from the factory which is mated to a 5-speed manual transmission. This convertibles interior is clean and uncluttered with a dash that also is a throwback to the 60s. The power-operated top can be opened in about 20 seconds after releasing the two catches on the top of the windshield and pushing a button on the overhead console above the rearview mirror. The top has a glass rear window for great rearward visibility; it even includes a rear defroster. Insulated fabric in the top keeps the interior very quiet for a convertible when it is up. When it is down even at highway speeds wind intrusion into the cockpit is kept to a minimum thanks to the steeply raked windshield and the design of the rear seatbacks Ford says. GT models come with a five-speed manual transmission four-wheel antilock power disc brakes with all-speed traction control sport-tuned stainless steel dual exhaust front fog lights built into the grille a rear spoiler and a tilt steering wheel air conditioning dual power mirrors AM/FM stereo with single CD player power door locks with remote keyless entry and power windows.Styling cues from the early Mustangs made this newest generation of Fords pony car convertible an instant hit when it arrived part modern part blast-from-the-past yet with enough state-of-the-art engineering to make this Mustang convertible a blast to drive. 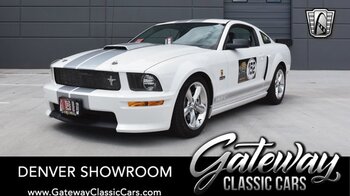 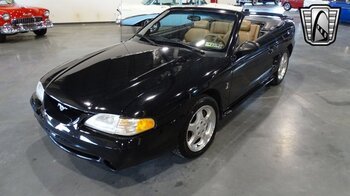 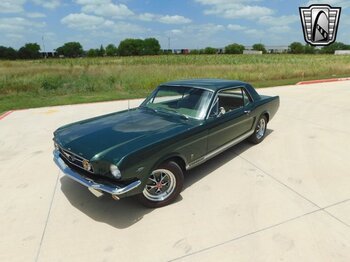 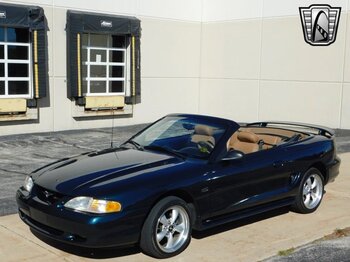