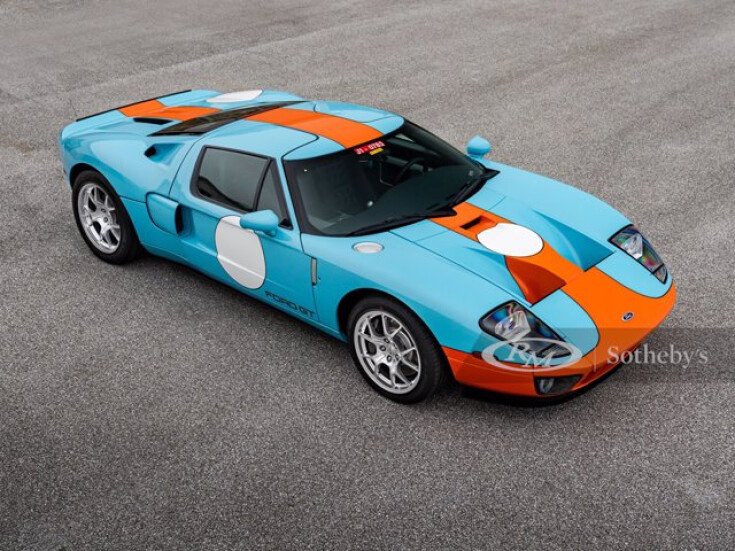 To Be OFFERED AT AUCTION at RM Sothebys Amelia Island event, 22 May 2021.


As part of the Ford Motor Companys centennial celebration, Ford debuted the retro-styled GT. A modern homage to Fords racing heritage, the GT celebrated the highly successful GT40 program of the 1960s, which won Le Mans an impressive four consecutive years from 1966 to 1969. Exceedingly popular since its debut, the GT went into production for the 2005 and 2006 model years, during which time just 4,038 examples were produced.

In addition to the stunning design, the Ford GT featured impressive performance. Powered by a mid-mounted 5.4-liter dual-overhead cam V-8 engine featuring a Lysholm twin-screw supercharger and dry sump oiling system, the GT is rated at 550 horsepower and 500 foot-pounds of torque. The engine is paired to a Ricardo six-speed manual transmission featuring a helical limited-slip differential. This driveline allows the Ford GT to achieve a 205-mph top speed and 0 60 time of just 3.3 seconds.

These extraordinary performance figures put the car in competition with other supercars of the time, such as the Porsche Carrera GT and the Mercedes-McLaren SLR. For the final model year, 2006, Ford introduced a limited-production Heritage Paint Livery Package edition. Finished in Heritage Blue with Epic Orange stripes, the cars featured four white roundels to which the owner could add a number of their liking. The rare livery was inspired by the double-Le Mans-winning GT40 of 1968 and 1969, chassis number 1075, which famously featured Gulf Oil sponsorship.

This 2006 Ford GT Heritage edition is a Canadian-spec three-option car featuring the Gulf Oil inspired Heritage racing livery, Gunmetal Grey-painted brake calipers, and forged alloy BBS wheels. With just 2.7 miles indicated on the odometer at the time of cataloguing, it is likely one of the best preserved, lowest-mileage Ford GT examples in existence.

Of the 2,011 Ford GTs produced for 2006, only 343 were Heritage editions. Further, it is one of just 50 Heritage GTs produced in 2006 destined for sale in Canada. Canadian-spec GTs all came with the optional forged wheels, gray brake calipers and the regular stereo; there was no stripe delete option with the Heritage cars, either. The lack of offering the McIntosh CD stereo system on Canadian examples is attributed to reducing weight gains from the cars different bumper configuration. As a Canadian-market car, it does have daytime running lights, a different type of heavier foam in the front bumper, and a rear bumper spacer, which protrudes slightly further than its U.S.-spec counterpart.

This remarkable Ford GT remains virtually as new, with the factory-provided protective wrappings for the drivers seat, steering wheel, and door sills still present and pre-delivery windshield stickers still attached. The sale includes all factory documents, keys, manuals, Canadian rear bumper spacer and the accessories which were generously provided when new, including a set of roundel numbers in their original box. Furthermore, it is also accompanied by an original David Snyder oil painting of the famous 1968 24 Hours of Le Mans-winning Gulf Oil-liveried Ford GT (which sported #9 during that race) commissioned by the consignor.

When introduced, demand for the Ford GT outstripped supply, with early cars selling for substantial premiums over the MSRP. No doubt, this would have brought delight to Henry Ford II, Enzo Ferraris archrival during the 1960s as would the fact that the Ford GT remains more than capable of running with its period competition from Maranello. With its performance credentials, quality of manufacture, and its clear lineage to the original GT, it is obvious that Ford created a modern classic, as embodied by this remarkable low-mileage Heritage racing livery example. To view this car and others currently consigned to this auction, please visit the RM website at rmsothebys.com/en/auctions/am21. 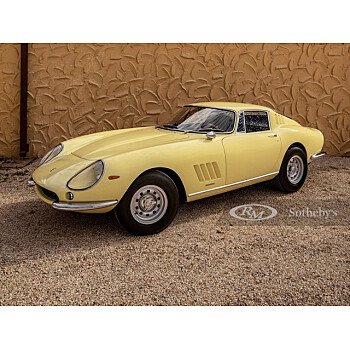