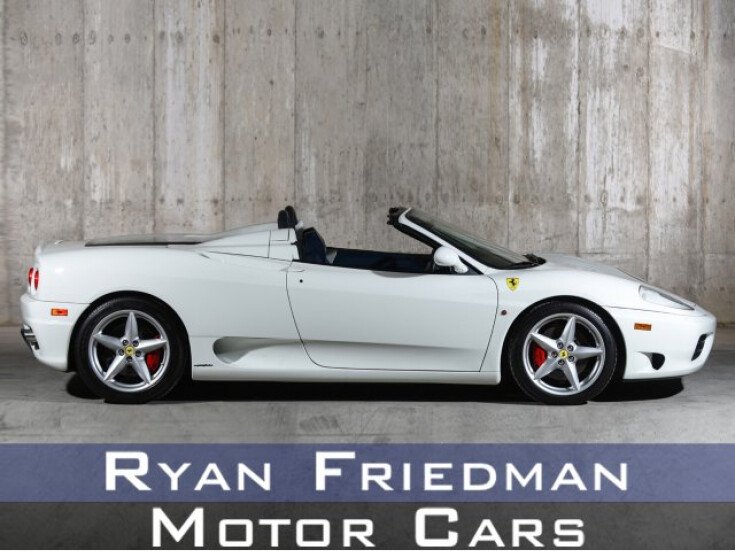 Superiorly seductive and sensually stimulating to ones auditory, touch, and visual senses; this 2001 Ferrari 360 Spider is the very definition the term, white-hot. Taking ownership of a Ferrari instantly transcends one to celebrity status. But what if further exclusivity was granted? Well, this exquisite example is a physical illustration of the latter and heres why starting with the color; Ferraris are typically seen and ordered in Ferraris famed Rosso Corsa (Red) and Giallo Modena (Yellow) with an interior finished in Beige/Tan. Yes, instantly recognizable and notable! However, this unit deviated from the traditional colorways in lieu of a color specification thats very modish and breathtaking. The exterior is enrobed in an ethereal Bianco Avus (White) and is displayed on silver 18 - inch star-spoke wheels (showcased in front of fervent red Brembo brake calipers), a soft top completed in blue, with blue continuing onto the interiors supple Connolly Leather. The cabin is further enhanced by brushed metallic trim inserts, silver stitching featured throughout, black gauge instrumentation, embossed Cavallino Rampante (Ferraris iconic prancing horse) in the headrests, with the upper dash and door panels being finished in Blu Scuro (Dark Blue) as well as the piping outlining the seats; while the lower dash and doors leather paneling are shown in a lighter shade of blue -- very awe-inspiring and captivating! In viewing the cabin of this 23,XXX kilometers (approximately a low 14,XXX miles) example, theres an even more particular standout; the gated shifter. Aside from offering an even more enthralling driving experience, the defining characteristic of the manual is its rhapsodic metal on metal clicks as you shift through the 6-speed manual gearbox. During the 360 Modenas production run (that commenced in 1999 and ceased in 2004) its estimated that Ferrari produced 2,119 Spiders optioned with a true manual transmission worldwide, while the F1 semi-automatic equipped 360 Spiders production is estimated at 5,460. 2011 would mark the final year of Ferrari producing its iconic gated manual transmission. In keeping with the even lower production numbers for the manual donned Spider, a scarcely seen Bianco Avus (White) exterior furthermore intensifies and solidifies the rarity of this 360. The overall design language on the exterior is organic and ornately sculptural; thus allowing onlookers to be marveled not only by its color and presence but its sound! To the rear lies an Italian orchestra, typically when one attends an orchestral concert youre facing directly towards the music -- not in this case as its nearly behind your head! Enclosed by a glass cover, the 400 plus horsepower, liter 3.6-liter V8 engine is showcased in a way that fine art is expected to be. Being that this is a Spider along with its ultra-desirable gated manual transmission, adds to an even more profound driving experience. Having the soft top retracted and hearing the very much acclaimed gated shifters metal on metal clicks in conjunction with taking the V8 to its 8,500 redline (in which emits one of the worlds greatest exhaust notes), is total euphoria unlike anything else! In keeping with the breathtaking color scheme, this particular 360 Spider differs from others as Its a European Specification car. This is denoted by the 8th letter in its VIN being B, whereas U.S spec cars will feature the letter A. European specification units are known for having more horsepower than the U.S specification 360 Modenas as those came factory equipped with headers from the track-only 360 Modena Challenge car. Additional Euro-Spec highlights include an odometer that displays in kilometers, headlight washers, and a differently tuned ECU. This unit displays a clean CARFAX and is ready to be thoroughly enjoyed by its new owner. For additional information regarding this magnificent, European Specification 2001 Ferrari 360 Spider with its beautiful and rarely seen color combination along with being equipped with the ultra-desirable, 6-speed manual transmission; please call us now at (516) 888-9000!