Final year L98. 6-speed manual. 50,000 original miles. Transparent roof panel. Extensive recent service including new Goodyear radials. Runs and drives superbly, no issues, everything works. The biggest bang for the buck in our showroom!Yes, Corvettes can be very reasonably priced! This 1991 Corvette coupe surely represents one of the biggest bangs for the buck anywhere in the automotive universe. A car that originally cost nearly $50,000 (and those were 1991 dollars!) and provided a robust 250 horsepower is now available for the price of an 8-year-old Honda. Better still, its been one of those many Corvettes that has always been treated as something special by a caring owner and never used as daily transportation, so it shows just over 50,000 original miles (remember this is a 31-year-old car) and virtually unmarked factory Arctic White paint. Thanks to a lifetime in a warm garage and Saturdays spent being waxed and detailed, the smooth C4 bodywork is almost entirely blemish-free and shines up wonderfully without a lot of effort. By 1991, fit and finish were quite good and every panel on this car is where it was installed by the guys on the Bowling Green assembly line. Its possible that the nose has been repainted simply because its really, really nice, but we cant say for certain. What we do know is that this car looks like it should cost far more than it does (dont worry, we wont tell your neighbors).The interior is in fantastic condition with the front seats having been recently reupholstered using correct OEM-spec leather. Obviously, there are no splits, tears, or even major scuff marks, even on the high-wear outer bolsters, and the carpets are equally nice. You have to develop your technique for getting into a C4, but its obvious that the previous owner knew his stuff, because the usual wear on the sill is notably absent. The leather wheel feels great in your hands and hasnt been baked by the sun and for a car with a removable roof, this one is remarkably devoid of UV damage. The dashboards combination of digital and analog instruments actually works quite well as a visual reference and all the electronics, gauges, and systems are 100% functional. Corvettes, being GMs flagship model, always come loaded, and this one includes things like automatic climate control, power windows, locks, and seats, keyless entry, heated mirrors, a trip computer, cruise control, and a great-sounding Delco/Bose AM/FM/CD stereo system. The optional transparent roof makes it feel airy inside and theres decent storage behind the seats. You could certainly do worse than choosing a Corvette as your cross-country touring partner.Mechanically, the C4 is legendary. It sports the last of the L98s, which was rated at 250 horsepower, a heady figure in 1991. The past three decades have also proven that this is among the most reliable powerplants ever devised by man, bulletproof under almost any conditions and always willing to play. Its also insanely easy to modify with a vast aftermarket at its service, but this one remains entirely stock, so its easy to live with and service. Obviously it was never raced or abused and the tidy engine bay reflects conscientious maintenance throughout its life. Backed by a great-shifting ZF 6-speed manual transmission, the L98 always seems on its toes. Stab the throttle and a mountain of V8 torque rockets it forward like its on the deck of the USS Nimitz, but in either of the tall overdrive gears, it loafs along on the highway, pulling down mid-20s fuel economy. The suspension is athletic without being abusive, unlike earlier C4s, so it really is friendly enough to drive every day but potent enough to have fun when the road starts to turn. Just be aware that despite being 30 years old, this car still has insanely high limits, although the ‘Vette is a lot more user-friendly than many cars with equal performance. Massive disc brakes have been standard on the Corvette for decades and stand up to high-speed use without complaint. This car also wears 17-inch alloy wheels which wear new 275/40/17 Goodyear performance radials with fewer than 300 miles on them.Nicely maintained, beautiful, and still a lot of fun, this Corvette offers a ton of performance at an entry-level price. Complete with owners manual and a few other books, it offers entry into one of the best enthusiast clubs in the automotive kingdom and everyone will think youve won the lottery when they see this bright white ‘Vette in your garage. So let them think whatever they want, because this is the performance bargain of the century. Call today!Harwood Motors always recommends and welcomes personal or professional inspections of any vehicle in our inventory prior to purchase. 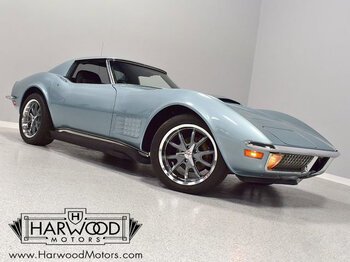 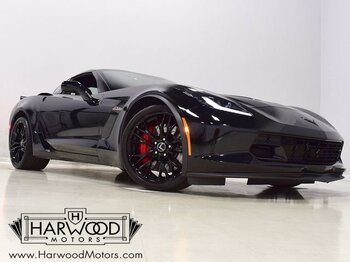 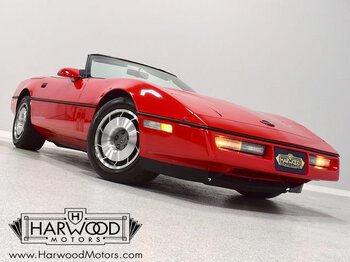 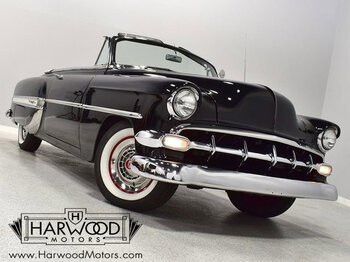