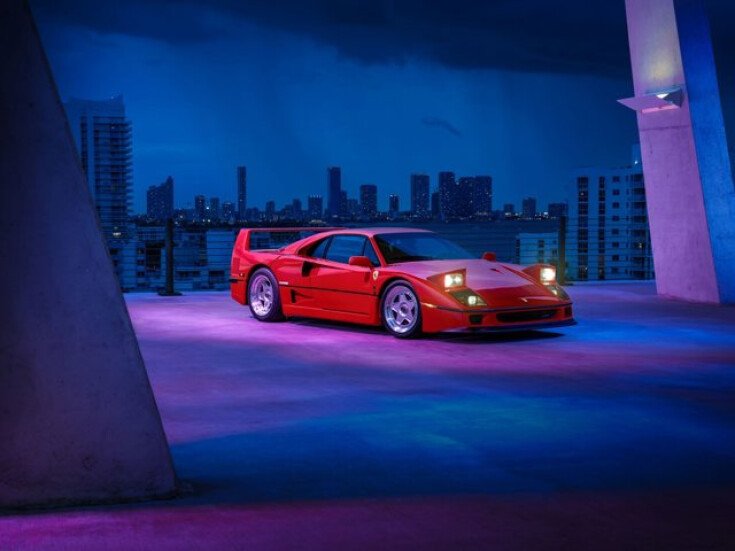 Engineered to celebrate the 40th anniversary of Maranellos first model, the 125 S, the F40 to this day remains one of Ferraris most captivating and impressively specified supercars. The model was originally conceived to be an FIA Group B competitor, and it was consequently developed from the superlative 288 GTO to take on the likes of the Porsche 959. Enthusiasts can be grateful that the F40s nearly stillborn gestation continued forward even after the racing class was canceled. Rather than scrap the program entirely, Ferrari used the five initial 288 GTO Evoluzione examples as the basis of a new 40th-anniversary road car that would be the last supercar devised under Enzo Ferraris stewardship.

As it was designed for competition, the F40 featured a race-developed steel tube-frame chassis with four-wheel double-wishbone independent suspension, coil-over Koni shock absorbers, and four-caliper ventilated disc brakes. Pietro Camardellas coachwork design, executed under the direction of Leonardo Fioravanti and aerodynamically perfected in Pininfarinas wind tunnel, was built with paneling woven of Kevlar and carbon fiber, reducing the curb weight by approximately 20 percent while simultaneously tripling the cars structural rigidity.

The 288s twin-turbocharged V-8 was bored to displace 2.9 liters and equipped with IHI turbochargers and Behr intercoolers; this engine was married to a five-speed transaxle actuated by a gated shifter. The resulting performance was nothing short of astounding, as the type F120 040 engine developed 478 horsepower and 425 pound-feet of torque, capable of launching the F40 to 60 mph from standstill in just 3.8 seconds and achieving a top speed of 201 mph (thereby eclipsing the Porsche 959 and Lamborghini Countach).

Cosmetically, the F40 amply reflected its basis in racecar development, with the lightweight body echoed by numerous interior considerations. Weight was further reduced with the use of cloth upholstery on plastic-composite racing seats, pull-strap door releases, drilled pedals, and Perspex windows.

Publicly introduced at the 1987 Frankfurt Motor Show, the F40 was initially earmarked for a low production run of 400 examples, but skyrocketing customer interest prompted Ferrari to ultimately build 1,315 cars. The commemorative supercar was initially only available in Europe, and early examples were built without catalytic converters or adjustable suspensions. In 1990, deliveries of a more developed version began in the United States; these were standard-equipped with air-conditioning and catalytic converters. By the models production conclusion in summer 1992, just 213 examples had been specified and delivered to America, and it remains notable for being the last supercar developed under the watchful eyes of Il Commendatore himself, the legendary Enzo Ferrari.

Occupying such an important position in Maranellos supercar lineage, it is hardly surprising that many F40 examples were initially purchased by astute collectors and largely restricted to showroom viewing and concours exhibition. Relatively few cars were driven in anger on a track, but a handful of drivers were lucky enough to experience the F40 under such conditions.
As a case in point, five-time Le Mans champion Derek Bell was allowed to push the cars limits during a test drive for Classic & Sports Car magazine conducted during the mid-2000s. His verdict: Its just magnificent This is a car to make your hair curl. The power delivery is sensational, and I love the way the turbos come on with such a rush. Very quickly the situation changes from neutral understeer to amazing oversteer, but its all superbly predictable.

But the endorsement of a pedigreed championship driver was no requirement for the F40 to attract an ardent fanbase, as illustrated by an entire generation of teenage gearheads who proudly displayed posters of the 40th anniversary supercar on their walls. Many of these same children have grown up to be todays respected collectors, and their continued devotion to the F40 testifies to just how iconic the model truly is.

This exquisite example of the legendary F40 claims important ownership provenance, Ferrari Classiche certification, and minimal driving use during a life of fastidious care. According to the research of marque expert Marcel Massini, chassis number 85596 is the 18th of 213 examples specified for the United States. Completed in June 1990, the F40 was distributed to Grand Prix Motors of Seattle, Washington, and in August it was sold to one of the worlds best-known and most successful businessmen and philanthropists, Paul Allen (as confirmed by handwritten entries in the cars original warranty booklet).

Hardly requiring an introduction, Mr. Allen was the co-founder of software giant Microsoft, and is also well known for his ownership of sports franchises, including at various times the NFLs Seattle Seahawks and the NBAs Portland Trailblazers. The F40 was delivered to him with one of the models most desirable options, the exquisitely upholstered leather fitted luggage made by Schedoni.

Mr. Allen retained possession of the fine Ferrari for 13 years, during which time the car accrued very little mileage, reportedly displaying just 1,600 miles on the odometer when it was offered in July 2003. Choosing to upgrade to Maranellos latest hypercar, the Enzo, Mr. Allen sold this F40 to Michael Warn of Oregon, as reflected by a title copy on file dated October 2003.

In June 2007 the Ferrari was acquired by a well-known Italian supercar dealer in Laguna Niguel, California, and he had the car serviced by a marque dealership, including attention to the clutch and air conditioner. The opportunity was further taken to certify the car with a Ferrari Classiche Red Book, which attests to the continued presence of all the major matching-numbers mechanical equipment.

Sold in March 2008 to an enthusiast residing in Asheville, North Carolina, the F40 again changed hands 19 months later when it was purchased by a collector in Darien, Connecticut. In October 2011 the car passed to a Florida-based owner before being acquired by the consignor in 2019.

Currently displaying just 2,736 miles, this incredibly original F40 is believed to feature all of the factory-applied paintwork and continues to retain all of its matching-numbers mechanical equipment, just as it was certified by Ferrari Classiche 14 years ago. The breathtaking berlinetta is well documented with the Massini history, warranty booklet, prior titles, bills of sale, and a service invoice; and it is accompanied by owners manuals in the proper pouch, tools, and the Schedoni fitted luggage.

Opportunities to acquire such a finely preserved and pure early example of the venerable F40 do not often surface, and this fantastic car claims the additional provenance of initial ownership by the noted and highly influential Paul Allen. Given these superlatives, this Ferrari should attract the attention of any marque enthusiast or collector of Maranellos important hypercars, sure to bring unquantifiable pleasure to its next owner, whether displayed at events or driven and enjoyed for its exhilarating performance capabilities. To view this car and others currently consigned to this auction, please visit the RM website at rmsothebys.com/en/auctions/mi22. 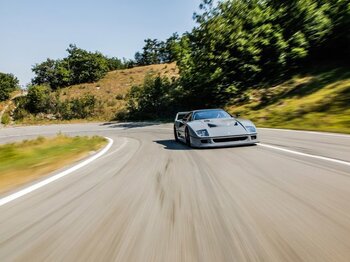 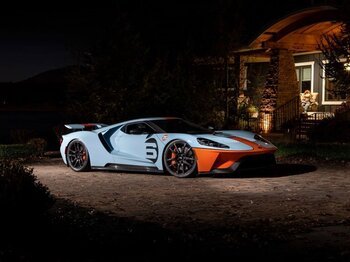 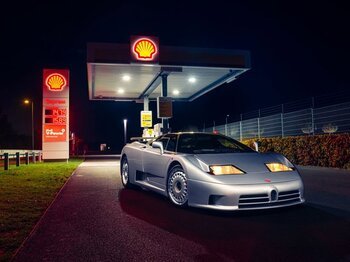 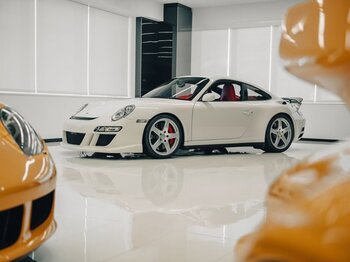