A dream car since it hit the road in 1975, Porsches first generation of the 911 Turbo, known internally as the 930, quickly established itself as a global performance benchmark. With huge, flared fenders and a whale tail rear spoiler, it looked the part as well, all while being instantly recognizable as both a Porsche and a 911.

In 1982, Porsche racing sponsors requested that the German automakers Exclusiv Manufaktur sometimes called Sunderwunsch or Special Wishes program create a unique road car that looked like the world-beating Type 935 racer. The resulting bodywork indeed bore a close resemblance to the aerodynamic 935, with louvered steel front fenders made flush with the hood and fitted with retractable headlamps. The rocker panels were boxed and extended to meet the widened rear quarter panels, which contained new brake-cooling vents with side strakes and an electric fan for additional oil cooling. Wider wheels and tires were fitted at both ends.

Within months, Porsche was overcome with customer requests for the 935-inspired Flat-Nose treatment. Unsurprisingly, these cars were typically optioned by only the wealthiest clientele, and with many additional factory upgrades. In 1987, Porsche finally added the North American Flat-Nose package, known by the option code M505, to the factory catalog, and 142 coupe examples were produced for the United States that model year.

One such example of the US-spec Flat-Nose 911 Turbo is offered here. Completed in May 1987, the car was originally delivered to an individual in New Jersey. Just a year later it was sent to Ontario, Canada, where it would spend the next 15 years, until crossing the border again into Washington State in 2013. The following year, the car was sold to its present caretaker, who imported it to Kuwait. Showing just a few ticks over 8,600 miles on the odometer at the time of cataloging, this rare Porsche has seen limited use over the course of its life. The service booklet on file documents the oil changes with mileage logs performed throughout the decades.

Finished in the correct color of Guards Red, the car appears to have been resprayed at some point. The luxurious interior features supple Champagne leather throughout with contrasting red piping on the seats and carpets. In addition to the highly exclusive M505 Flat-Nose special option, this 911 Turbo was equipped from the factory with heated front seats, a limited-slip differential, an alarm system, and a Reno Blaupunkt AM/FM stereo cassette player. The car rides on correct, staggered, 16-inch Fuchs wheels, beautifully finished with their signature black centers and polished lips.

All factory Flat-Nose 911 Turbos are highly desirable; this low-mileage example in a classic color scheme, with the factory-installed limited-slip differential to help harness the immense power, is even more so. With such limited production of US coupes for the 1987 model year, this standout Porsche is an exceptional find for the Porsche enthusiast.
To view this car and others currently consigned to this auction, please visit the RM website at rmsothebys.com/en/auctions/mi22. 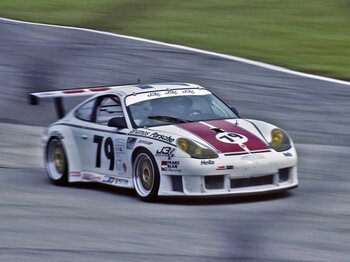 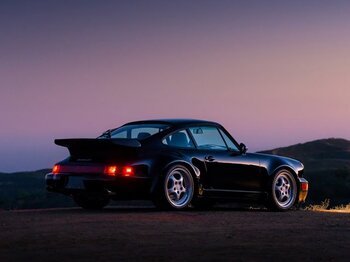 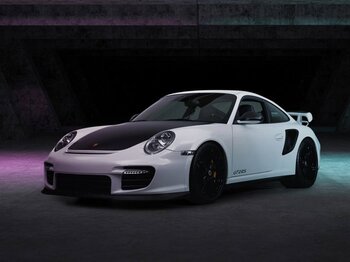 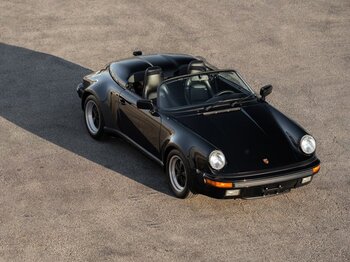