1983 Porsche 911 SC Cabriolet is finished in red over a two-tone black and red interior and powered by a 3.4-liter flat-six that was built in 2008. The five-speed manual transaxle was overhauled and fitted with a replacement clutch in 2016, and additional features include a black soft top, polished 16 Fuchs-style wheels, SSI heat exchangers, a Dansk stainless steel exhaust, cross-drilled brake rotors, leather, and microsuede GTS Early style headrest sport seats, Coco mats, and a killer aftermarket stereo. I acquired the car in 2017 and a repaint was subsequently performed. This 911 SC shows 136k miles The 3.4 Big Bore was installed approximately 21K miles ago and is offered in California with a window sticker, complete service records, a car cover, a clean Carfax report, and a clean Montana title in the sellers name. This is a very Lively car to drive with the 3.4 all the running gear is in extraordinary condition along with the rest of the car. The body was repainted in its current shade of red in 2017 and features a black soft top, an automatic antenna, stone guards in front of the rear wheels, Euro-market H4 headlights, and a single exhaust outlet. The paint protection film is said to have been applied to the front end and the seller notes a small rock chip in a rear wheel arch. Polished 16 Fuchs-style wheels feature Porsche crest centers and are mounted with Pirelli Cinturato P7 tires that measure 205/55 upfront and 225/50 in the rear. Braking is handled by cross-drilled rotors at all four corners. Early Model style Headrest style GTS Classics sport seats are trimmed in black leather with red microsuede inserts and matching stitching. Amenities include a Wevo shifter, radar detector, Coco mats, power windows, and an aftermarket Alpine stereo with USB connectivity. The carpeting was replaced in 2008 with the air conditioning A three-spoke Momo steering wheel sits ahead of a 170-mph speedometer and a tachometer with a 6,300-rpm redline. 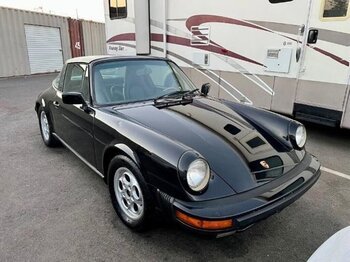 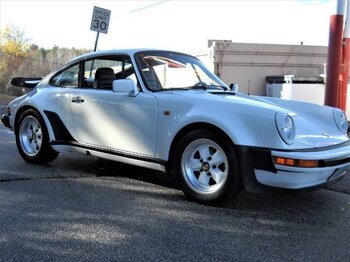 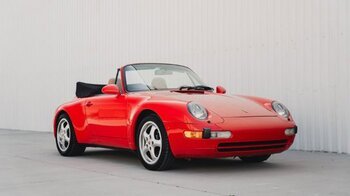 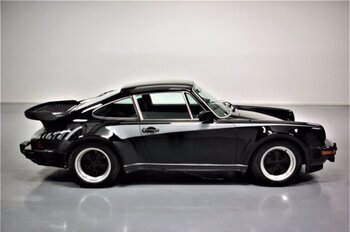