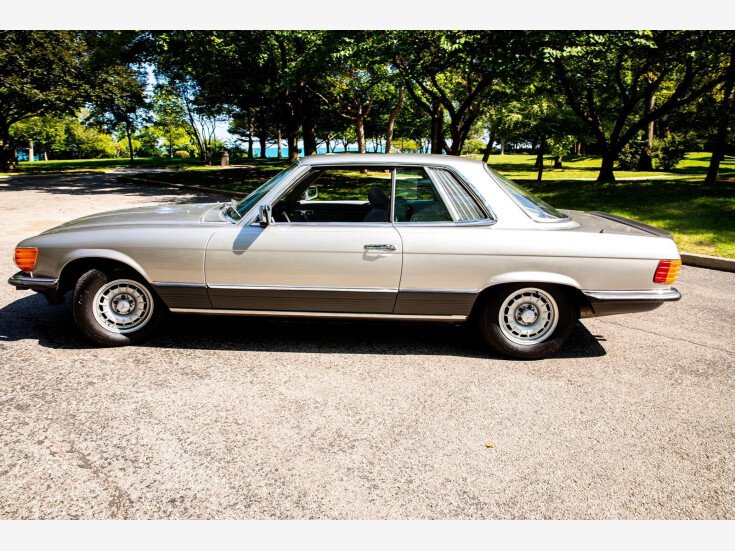 1981 MERCEDES 500SLC (NOT 1980 - THIS IS A EURO CAR AND AUTO TRADER SYSTEM DOESN'T ALLOW 1981).  One of the last examples off the line, one of less than 100 cars imported Stateside, meticulously cared for in restored mint condition. The rally homologation special with modern accomodations and drivability. It was the top of the line, flagship Mercedes in 1981 - no other was more expensive.   Originally owned by a Saudi Prince.

VIN# WDB10702612002636.  68,500 Miles,  Silver Metallic,  Gray Leather, Burl Walnut Console and Dash. All Leather Interior. NEWLY 2019-2020 REBUILT Aluminum Block V-8 Engine (ABOUT $12K) with less than 1000miles on the rebuild (500 of those were purposely put on for post-rebuildadjustments) - done with Mercedes factory parts by a German owned/operated Mercedes Specialist shop and have all receipts.  NEWLY STRIPPED AND PAINTED (JULY 2020) at cost of over $10k, NEWLY CHROMED BUMPERS )($2.5k), NEW MICHELIN XWX 205/70VR14 TIRES ($1.6k) summer 2020 with less than 200miles on them - same as Ferraris had in the 70's & 80's as couldn't bear to put on anything but the best), NEW REAR WINDSHIELD (we're told was last one in the world, shippedin from Dubai) All Modern Amenities including air conditioning (needs a/c hose and washer fluid pump which we keep trying to get but warehouses/parts network in Germany not presently functioning well for these older parts), power windows and powersteering. Factory Sunroof.  Spare Tire,Comprehensive Service Records.

I've had the car since 1992 and have driven it about 4-5,000 miles since. Had it up to 150mph through the desert on the way back from California after I bought it there so the top factory speed of 142-143mph is incorrect.  Engine was rebuilt as it was burning oil and now it's fine - all the receipts are in hand and it was done by a German owned and operated small import repair shop in Chicago as referenced above.  The German owner (they specialize in Mercedes) would probably be happy to answer questions about the rebuild and the car upon special request but I don't want to burden him with calls at this point.  Likewise the car was stored for a long time and I wanted to get it back to 100% shape looks wise so I had Joe Filek at Captain America Designs in Hampshire, Illinois (people ship him their cars from all over the country and he is backed up about 2-3 years) do all the stripping and body work at a cost in excess of $10k and had him re-install the rechromed bumpers.

This Mercedes-Benz manufactured Homologation Special Edition was specially built in production form to qualify for FIA racing standards, meaning in order to competitively race Mercedes-Benz had to create at least 1000 production vehicles to accompany official rally cars it wanted to race competitively.

Here is the 500SLC in the Mercedes Stuttgart Museum:  https://www.youtube.com/watch?v=d4eoUDTDVAM

The 450SLC 5.0/500SLC coupes were produced by Mercedes-Benz from 1978 to 1981 and are among the rarest post-war models. They were manufactured by Mercedes Benz to homologate (make competition race worthy) the 5 litre for road rally purposes. Some cars were competitively campaigned with factory support, but the rest of the production was sold to the European market to meet homologation guidelines.

The combination of the lighter weight and higher horsepower made for a quick and competitive car which raced successfully with the introduction of the 5 litre engine in the World Rally Championship Series including First Place finishes in 1979 and 1980 at the Ivory Coast Rally. Other notable participation in competition included the Rally of Argentina, Rally of New Zealand, Acropolis Rally and Portugal Rally. The cars were given massive factory support under the leadership of Eric Waxenberger. The fact that the Managing Board of MBAG officially withdrew from world rallying in 1980 makes the 5.0 the last factory-sponsored wholly Mercedes model. The rally racing clock for Mercedes-Benz ended for good with the successof this homologated SLC special.

Along with the performance enhancements and plaudits which are detailed below, this car’s comfort and daily drivability combined with every modern amenity led renowned championship drivers of the time period to use them as personal get-arounds.1979 World Champion Driver of Ferrari Team Jody Scheckter chose this as his personal car. Jean Pierre Ganier and Patrick Depailler of the Tyrrell Formula 1 team also chose the 500 as their daily drivers.

2769 of the 500SLC's were made over 2 years in 1980-81 and Fewer than 100 cars were imported into the United States. In 1999 Mercedes-Benz SLC specialist Bob Hatch of Hatch and Sons estimated that at most there might be 50 of these cars in the country good enough to interest a collector, but in the years since his statement, given the drivability of the these cars, there are certainly significantly less than that at present. The example be offered here is certainly in the very top echelon of those Mr. Hatch was speaking of due to its meticulous care over the years and frankly I'd be surprised if there's one in better condition after the engine rebuild and bodywork/painting re-chroming, re-'tiring'- and all the miscellaneous new parts - anywhere.

This example differs from the stock 450SLC’s in several important and distinctive ways. The hood and trunk lids are made from aluminum for significant weight savings. The car weighs 3,333lbs, 220lbs less than the standard SLC. To emphasize the lengths to which MB went to upgrade the car for homologation, it even has an alloy air cleaner to add to the weight savings. The front and rear aerodynamic spoilers the factory added result in a 9 – 10 % reduction in wind resistance and a top speed which exceeds 142MPH. The 5.0 is the very first Mercedes-Benz aluminum block V-8 production motor and is lighter than the standard iron block . It produces in excess of a whopping 300 HP and 350lbs of torque…a true blacktop powerhouse in its day. The 5.0 engine features factory reworked heads with larger valves, pressure fed valve adjusters, cross-bolted main bearing caps (4bolt mains in hot rod parlance) and many other special tweaks. The 500SLC also features the upgraded 4-speed automatic.

There's about a 4-6 week window until late October/early November where this car is for sale/viewing/driving as it won't see a drop of rain or snow and certainly not salt while it's under my care.