Bought this car from a neighbor's family (the owner had died). He was the second owner of a near mint original car. Which, during his ownership, had the engine rebuilt (and never used due to the owner's demise), lots of new new parts in the engine bay, brakes, clutch, new springs, new bushings, etc. The son-in-law told me 'this was his baby and he invested a small fortune in the car.'

What was amazing was ORIGINAL PAINT in Russet brown....no scratches, no nicks, no 'garage rash.' Just about perfect. And no rust underneath. Even the interior is all original other than carpets. And as you can see in the photos, looks almost like new.

Also...ran and drove like new, still with 75 psi oil pressure when warm, 50 psi at idle, zero smoke, quiet and smooth with just a touch of an 'exhaust note.' Everything works, wiring harness looks like new, all of the later B refinements: electronic ignition, twin thermostatically controlled electric cooling fans, front and rear sway bars, smoother engine, better gearbox and back axle, extensive factory rust proofing. And with an excellent floor pan.........no rust.

And now, after having sold the car to a local buyer who put less than 1,000 miles on the car, back in our inventory. With 57,000 original miles. Still perfect body and excellent ORIGINAL paint. Wire wheels, fairly new top, spotless engine bay, and (of course) a professional chrome bumper conversion using new grille, bumpers, overriders, brackets, sheet metal, and light units. We even eliminated the side lights and blended in the paint. And fitted a Mk I grille. Lowered to the pre 1975 ride height, new Weber carb with improved manifolding (and electric choke), a surprisingly nice car to drive, certainly a worthy competitor to a contemporary sports car.

As with our other conversions, this is the basis.....while the later MGBs were far superior in many areas to early cars, they did suffer from three tiny deficits....ugly, gutless, and ill handling. However, in this car, and at considerable cost, we fitted a new Weber carb (and racing headers) which renewed the car's performance, lowered it to the 1975 which not only improved the aesthetics BUT improved handling, and (finally) the elaborate chrome bumper conversion, elimination of side lights, and using a Mk I grille to make the car almost indistinguishable from the earliest and best looking MGBs.

In our showroom and ready for daily use. 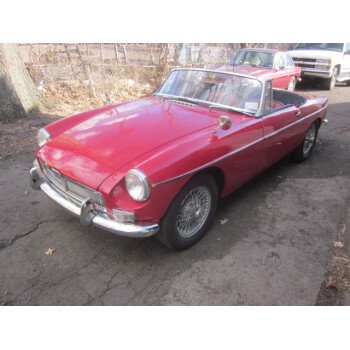 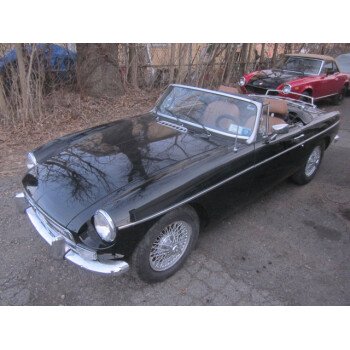 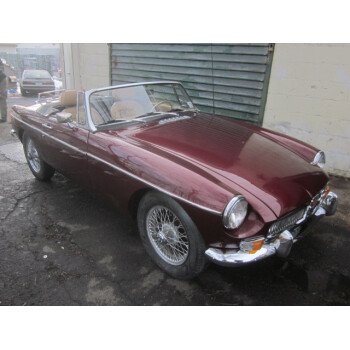 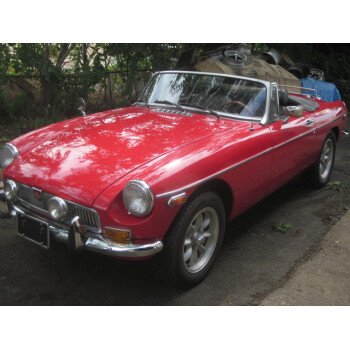