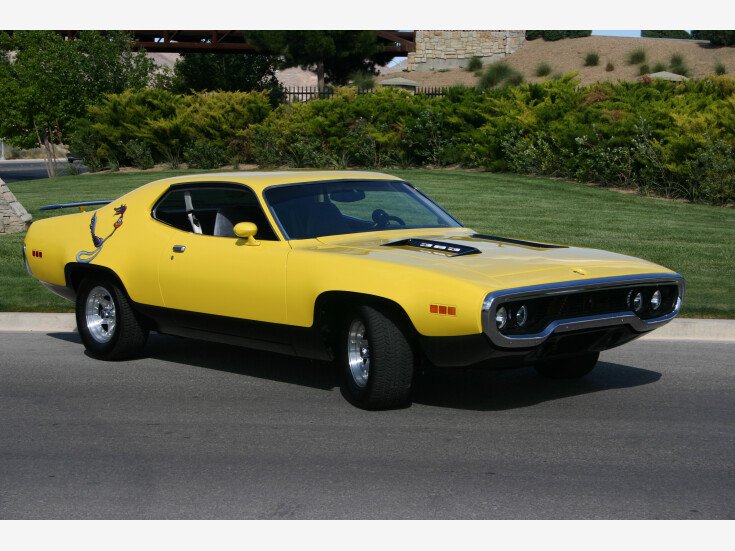 What an Exquisite example of the Muscle Car Era. This 1971 Plymouth RoadRunner is a “RM” model, Which was Chrysler’s designation as there Race Version. This Bird is Classified as a “Modified Stock”. Which means she retains the looks of a stock car, but has a Custom Paint job with one of a kind Murals, Custom Interior, Custom Tires & Wheels and a Highly Modified Engine and Engine Compartment. You will be Cruising in Style listening to her 300 Watt Alpine Stereo System.  She has been Totally Restored, Tore down to Nothing but the Frame, Sand blasted, metal prep, epoxy primed, then reassembled & painted. Special Helli Head Lights turn the Night roads ahead into Day.  She is a Real Eye Catcher. You Must be Careful when driving her because other Drivers pay more Attention to her then they do to their Driving!!  But don’t be Fooled!! She Sports a 512 Cubic inch Engine topped off with a set of CNC Indi EZ 1 Heads, which was built to Perform on Premium Pump Fuels. The Signature Hurst 4 Speed Pistol Grip Commands the Road. She also sports 11” Disc brakes up Front & Large Drums in the Rear. With  R-12 Air Condition, of Course! She is pushed along with an Dana 60s Posi with 3.73 gears that make her step up and be noticed on the Strip but will also cruse the streets with no problems. She has a Custom Interior that has a High Tech sound & heat deadening padding. The Trunk is also Fully Custom Carpeted and supports the Battery in a Very Cool Morso Aluminum Case. A Removal, Rally Steering Wheel, Along with a few other Anti-Theft devices helps keep her safe.  This Car is Not for the Faint of Heart!! A working knowledge is a must. It handles Well & Performs! She is a True Street Brawler. That is nothing but Classy. Pictures are only a glimpse of her True Beauty.

This Engine was built to Perform!! With saying that there is a small miss match with the Purpose of what I intended & what I Built.

I wanted a Custom Show, Street Car with Air Condition. With the Indy Race Heads, I was not able to build the custom A/C, Alternator Brackets that were True to the Upper RPMs. Which leads to throwing the belts during a power shift above 4000 RPMs. A few years ago I had Traumatic Brain Issues which led to major Therapy which caused me lose the Ability to Design & Engineer Specialty Parts. As a Result If you wish to have a Mopar Engine which could reach above the 900 HP THIS IS THE ONE TO HAVE !!!

But you would need to design new brackets or exchange the Indy heads for a set of Stock Style Aluminum Performance Heads, if you wanted to do A/C, or do another 440 Style of Engine. I have invested over $6,000 in these Indy Heads Alone, pushing $16,000 on the entire Engine. The Cam is Very Large and produces less than the Vacuum needed to operate the Brakes the way most people like, so a vacuum booster of some type should be used with this engine.

If I were to keep the RoadRunner I would Just Sell the Engine, Pay Someone to drop another 440 in her & pocket the Change. A new engine with a lesser Cam, would eliminate the need for a vacuum booster. The Car has less than 1500 miles on her since being restored. I have also installed the spare tire in the upper middle of the trunk which adds to the Wow factor.

As a Note; the Opening Picture Shows the Hood Emblems as 383 which has been Custom Repainted to Show 512.

You can also view this on www:Musclecarfantasy.com