Gateway Classic Cars of Atlanta is proud to present this 1971 Chevrolet El Camino. The concept of a two-door vehicle based on a passenger car chassis with a tray at the rear began in the United States in the 1920s with the roadster utility (also called roadster pickup or light delivery) models. Although based on corresponding General Motors car lines the vehicle is classified in the United States as a pickup. The Chevrolet El Camino is a coup utility vehicle that was produced by Chevrolet between 1959-60 and 1964-1987. Unlike a standard pickup truck the El Camino was adapted from the standard two-door Chevrolet station wagon platform and integrated the cab and cargo bed into the body. Introduced in the 1959 model year in response to the success of the Ford Ranchero coup utility its first run based on the Biscaynes B-body lasted only two years. Production resumed for the 1964-1977 model years based on the Chevelle platform and continued for the 1978-1987 model years based on the GM G-body platform. Chevrolet introduced a longer El Camino in 1968 based on the Chevelle station wagon/four-door sedan wheelbase (116 in (2946 mm) overall length: 208 in (5283 mm)); it also shared Chevelle Malibu exterior and interior trims. The interior was revamped including cloth and vinyl or all-vinyl bench seats and deep twist carpeting. The 1971 El Camino got fresh front-end styling (again shared with the Chevelle) that included large Power-Beam single-unit headlights a reworked grille and bumper and integral park/signal/marker lights. For 1971 mandated lower-octane unleaded fuel necessitated a reduction in engine compression and GMs A.I.R. system a smog pump was added to control tailpipe emissions. Powering this El Camino is a 350 Cubic Inch V8 backed by a Automatic Transmission. Options on this 1971 Chevrolet El Camino include: Air Conditioning AM/FM Radio with Bluetooth Anti-Theft System Power Brakes Power Steering Radial Tires Vinyl Interior Seat Belts Air Ride Suspension in the Rear. 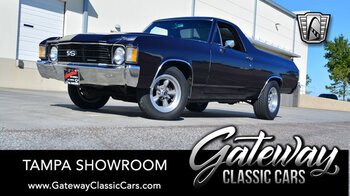 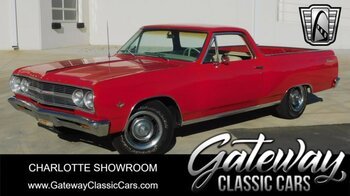 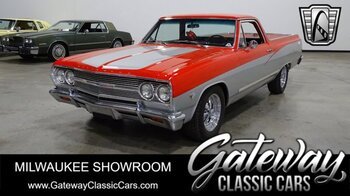 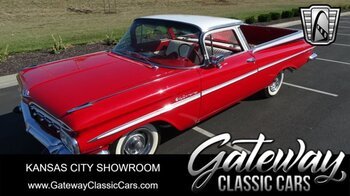