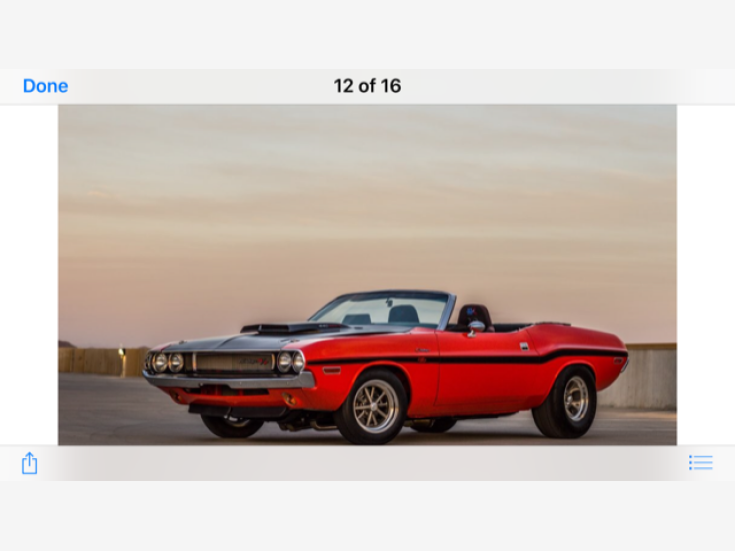 In 2004/05 the RESTOMOD project began and ironically was completed about the time the new SRT Challenger began to hit showrooms in 08’ – Because I had no knowledge of the whereabouts of any original piece and knowing there weren’t any 383 Magnum cars outside of a few late 60’s A bodies that would be quick enough for my tastes I moved forward with the hot-rod over the fully restored option.

Once finishing the deconstruction I took the car to REDI-STRIP in Tempe, Arizona before moving it to Mirror Image in Glendale.  During the disassembly I got a little support specific to the car being a drag racer in the 70’s.  There was damage to the tunnel over the bellhousing and rear end housing where explosions had happened with what I assumed to be the original components.  The upgrade of the Dana 60 and Ansen “blow-proof” bellhousing for the Hemi 4spd further supported what had happened to the originals. Moreover I took the engine and related parts to NHRA record-holding engine guru Dennis Maure of Tempe.  As for the Dana 60 and Hemi 4spd, they went to Arizona Gear Repair.

Mirror Image had my car for nearly a year improving on the original offering with a tied sub-frame, blocks welded into the two weak areas above the decklid where convertible big blocks would crack and opening up the rear fenders just enough to add bigger tires than any stock Mopar muscle car could accommodate. Body is STAIGHT!

The ENGINE:  Puts out 510 HP and 600 ft. lbs of streetable power.  471” B Motor – Aluminum Stage 6 Mopar heads with Crane Roller 1.6 rockers – Hughes .600’ hyd cam with straight cut gear drive – Eagle billet rods and forged stoker crank, billet main caps with studs  – Ross forged 10.50 comp pistons with Total Seal rings – Jet Hot coated Victor NO2 Intake with Holley 950 DP – Jet Hot coated Hooker 2” headers – MSD Digital 6 box with MSD billet distributor (with one race and one street coil).  Intake sent to Southern Cal for direct injection NO2 System (twin tanks in trunk).  The injectors have NEVER had the pills installed, the NOS tanks have NEVER been filled and the dedicated fuel pump/line has never been operated.  The car is PLENTY scary for me without tuning for NO2 but it sure gets lots of “Ho*y Sh*t” type of comments at shows.

EXHAUST: After the 2” coated Hookers the 3.5” collects exit into two electrical cut outs before moving into the 3.5” pipes and X-pipe before hitting looping over the rear where they are down to 3” and into 3” round mufflers and factory looking stainless tips.

The TRANSMISSION: The beefy Hemi 4 speed was mated to a CenterForce Dual Friction Clutch, billet flywheel and “bullet proof” bellhousing.

The REAR END:  The Dana 60 was made even better with a Detroit Locker, Billet Axels and a set of 4.10 gears covered by a TA aluminum stud girdle.  Between the Dana 60 and Hemi 4spd is a NASCAR chrome moly driveshaft and Spicer U-Joints.

Once the powertrain was installed and working the Challenger went to Restorations by Rob in Buckeye, AZ.  To say this little shop is a jewel specific to Mopar restorations/restomods would be a disservice.  These guys do cars for people not just in America but for folks as far away as Australia.  Rob and Curtis tackled the exterior, convertible top/hydraulics, chrome and hood.  Last year the car needed a little “refresh” regarding the new hood and black/orange interior.  The French/baseball stitching is in orange and really looks amazing.  New interior panels.  The grill was sent to Washington State and is now a $2,800 piece.  T/A and AAR fiberglass hoods are race weight and warp after a few years (just as they did from the factory).  While all the manufacturers say they beef them up to not warp, Mopar guys tell you it’s not working… As such I bought the best quality AND had Rob coat the underside with a black thermal barrier coating from Lizard Skin (worth a shot), with light springs and new hinges.  The car was headed to Barrett Jackson but didn't get finished in time.

I have this car more than fairly priced, in fact it’s $12K to $20K under current comps.  I have it priced to sell but please don’t mistake that for desperation. My plan is if I can’t sell it for at or near the asking prices I’ll have it at one of the big Auctions in Scottsdale the first part of 2021.  I will not be providing “joy rides” so if you wish to see the car I’ll let you know when I’m attending cars shows (like Cars and Coffee in Scottdale) or perhaps drive to a coffee shop for a meeting.

This old girl gets the looks/thumbs up and comments from Ferrari guys, GTR guys, Harley and crotch rocket guys/gals too.  To say nothing about the muscle car folks as this is one of the ICONIC ones and most likely the one still copied the closest to this, the ORIGINAL.  And unlike the Hellcats, ZL1s and Shelby Mustangs, this one doesn't lose it's value year after year.  I have $68K into the car, the rest is simply appreciation from 82' when I bought it for $3,400 which was a lot for a 12yr old car.