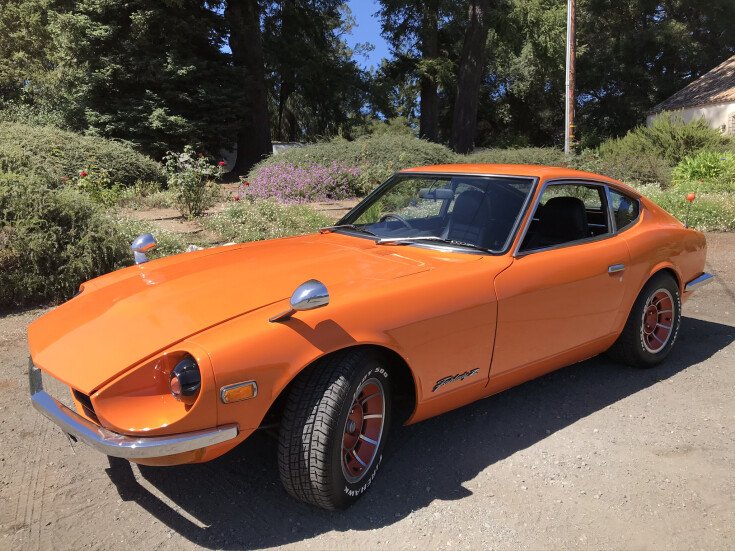 The Fairlady Z was introduced in October 1969 as a 1970 model, with separate versions for the Japanese and U.S. markets. The Japanese Fairlady Z, like this beauty, featured a 2.0L SOHC L20A straight-six engine producing 130 hp (97 kW) and came with a five-speed manual transmission with a top speed of 151 mph. Fairlady Z is the first generation of Z GT 3-door two-seat coupés, produced by Nissan Motors, Ltd. of Japan from 1969 to 1978. When the Fairlady Z was exported overseas it was called the Datsun 240Z. One of the most successful sports car lines ever produced, the trend-setting S30 was designed by a team led by Yoshihiko Matsuo, the head of Nissan's Sports Car Styling Studio. The 240Z's sleek styling, modern engineering, relatively low price, and impressive performance struck a major chord with the public. Positive response from both buyers and the motoring press was immediate, and dealers soon had long waiting lists for the "Z".   (*thank you wikipedia)

I’ve owned this car for 30 years. In 1989 while I was wrenching at Mel Clayton Ford in Santa Barbara it came in as a trade. The previous owner's wife wouldn't let him get a new car until he got rid of an old one. He drove this one the least of the ones he owned so it was the first to go. I bought it from Mel Clayton immediately.  It was in pristine condition, although I did have the bumpers re-chromed at the time.

I've entered it only once to a car show and it won 2nd place for its class at the June 2007 ZONC.

Over the years I’ve enjoyed caring for this treasure. The items I’ve upgraded and the spare parts included are described below (including a newly rebuilt L28 engine long block--see photos). I’ve retained all the receipts.

If you’re interested in the car and have any questions please call me, I love talking about this car.

This is a low-mile vehicle due to JDM right-hand drive configuration. It's been garaged for most of its life and has all original parts, except for handling and safety upgrades, electric fuel pump, and removal of Emissions Controls (I still retain original EC parts). Interior is in very good condition including the original rosewood steering wheel. There are some cracks in the dash and some other wear. Seats were replaced with used ones and are in good condition. It does have  small rust spots beginning to show in places, a door sill is rusted (I do have 2 replacement doors that are included). It  has a repaired driver-side floor pan. Vehicle was repainted at least once (scuff-n-shoot). It has a new OEM heater/radio bezel and an after-market Alpine stereo. I’ve added aftermarket custom LED lighting to the interior and undercarriage.

If I removed a part that could be put back on I kept it.