This is the car youve always dreamed would be available. A 1969 Chevrolet Camaro is quite an accurate tribute to the legendary ZL1. And when we say accurate, it means this low-mileage restoration even has the tags and markings on the undercarriage to recreate this muscle car legend. Best of all, its powered by GMs official 454 ZL1 engine to make sure this showpiece also knows how to turn its tires into smoke. Daytona Yellow is a terrific racecar-inspired name and vivid hue that was only offered on the first-gen cars in 1969. Heck, the shine is so good, it replaces the chrome of the front bumper. Its such a glossy finish combined with great sheet metal gives this coupe that kind of attention-getting sharpness it deserves, and so theres a ton of respect going down the road or parked at a cruise-in. While the color is flashy, the overall appearance is not out to be too showy. No SS badges, no RS headlights, just a lot of base-level style that saves weight. These were cars that let their special motor do all its talking, and thats the kind of substance is something we all love to see. Even the cowl induction hood is doing its part to feed the beast within. The front chin spoiler, D80 rear spoiler, and mirror-like rear bumper are pieces that you dont necessarily need for speed, but on a well-sorted coupe like this, they sure do make going fast look good. Most of us already understand exactly why we value an accurate tribute, but just as a reminder, this was basically a racecar for the streets. Above Z/28s and COPO cars, someone needed to know what they were doing to even find the ZL1 on the order books. And when they did, it cost nearly triple the price of a base Camaro. Since few racers had Cadillac Fleetwood money ready, Chevrolet only produced 69 examples of the ZL1. It has turned them into million-dollar cars today, and it makes an accurate tribute like this will even likely get you invited to some prestigious shows. Just like the exterior, the interior wants to be very stock and very clean. With less than 550 miles on this build, everything feels quite fresh. The seats, carpeting, door panels, headliner, dash, and other fundamentals have the look of a quality investment. And while there was a lot of money spent on the restoration, the options list was kept low, because thats what an accurate racer is all about. Youll find a few touches of flair, like the bold yellow stitching in the floor mats to coordinate with the exterior, but overall, its a driver-focused machine. So it gives you the right engaging features, like front bucket seats w/headrests, a Hurst shifter, and a thin/grippy classic steering wheel. And while it all looks highly stock and vintage, we like that the gauges were upgraded to modern units that fit in the original housing but give you a full picture of whats going on under the hood. What makes this ZL1 tribute so special is that it has a genuine ZL1 powerhouse under the hood. General Motors brought back this legendary designation in 2003 for a special motor. It was a lightweight aluminum big block, just like the 69 ZL1, and this time the displacement increased from 427 to 454 cubic inches. Whats particularly striking here is how they went to great lengths to make this more modern motor look like the classic piece. On the top, the gasket around the air grabber (now with 427 callouts) feeds fresh air to the large Holley four-barrel carburetor below. Theres even a Winters stamped intake. There are more great details, like the classic battery topper, correct GM hoses, and polished valve covers. So you have a modern juggernaut built to be a classic legend. You grab firm control over all this power with a four-speed manual transmission that feeds a 12-bolt rear end. The undercarriage looks just as fresh and clean as the rest of the car, and so you get to recognize the correct chambered dual exhaust and all the re-created factory markings. While the mileage is low on this one, its also made to be an easy drive with power steering, power brakes, and front discs. So feel free to show this special Camaro everywhere. Complete with engine services docs, this is the classic ZL1 style with a true ZL1 heart. So when its in a package this fresh and bold, you know its irresistible. Call now! 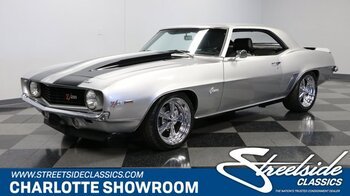 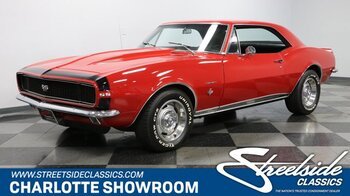 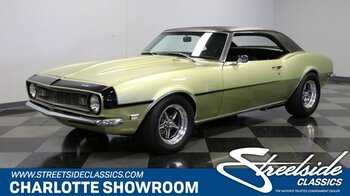 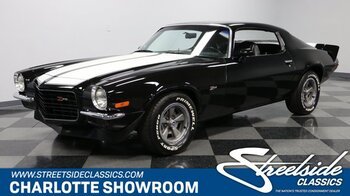