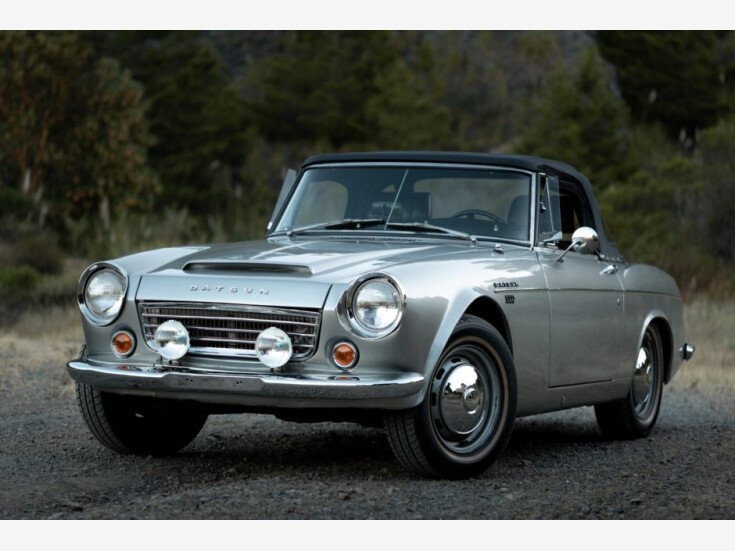 This 1967 Datsun 1600 roadster is a low-windshield model finished in silver over red. Its numbers-matching 1.6-liter inline-four is paired with a four-speed manual transmission. Work since 2014 included replacement of the starter and wiring harnesses, installation of a stainless-steel exhaust system and ceramic-coated headers, as well as rebuilding the cylinder head. This Datsun is now offered with service records from the past five years, spare parts, an extra soft top, a BRE car cover, and a clean California title in the seller’s name.

The exterior is finished in silver, which was applied to the car before ownership. The front end shows signs of bodywork, the grille is bent, and the headlights do not sit entirely flush. The photo gallery below documents the condition of the paintwork, top, trim, and chrome. The frame for the soft top was reportedly rebuilt and supports a black vinyl convertible top.

Steel wheels with chrome hubcaps are wrapped in thin-whitewall Uniroyal Tiger Paw AWP II tires, which were installed new about 200 miles ago. The fog lights seen above the bumper were added by the seller. The key for the extendable antenna is included in the sale.

The interior features red upholstery and matching carpets paired with a black dashboard. Red bucket seats with black headrests have matching red lap belts, and the console between the seats is finished in red as well. Factory equipment includes an AM radio and a heater. The ignition was moved to the left side of the steering column by the previous owner, and that a master cylinder brace has been installed to the inside of the firewall.

A three-spoke steering wheel frames Kanto Seiki gauges including a 120-mph speedometer and a 7k-rpm tachometer. The five-digit odometer shows about 950 miles. True mileage is unknown, and the seller reports adding approximately 1,100 miles since 2014.

The 1.6L R16 engine is mated to a four-speed manual transmission. Induction is handled by a pair of SU carburetors. The following work reportedly was performed under current ownership:

The engine stamping R54955 matches that on the firewall plate viewable in the photo gallery. The stamped chassis number also matches the firewall plate and is shown in the gallery.
Parts accompanying the sale can be seen in the gallery below and include new sun visors, a BRE car cover, Koni shocks, lowering springs, a refurbished factory jack, and a set of black California license plates.