1967 Chevrolet Malibu The storied Chevelle is one of those timeless designs that looks good no matter how its built. Stock, modified, race, pro-touring, whatever; the clean lines and balanced stance on these tough classics create a confident swagger thats universally admired. That means, if youre looking to ride in style, you really cant go wrong with a Chevrolet A-Body. Also, when you factor in this rides big block drivetrain, tastefully restored interior and first rate, all-American sheet metal, you get the picturesque profile of an incredible muscle car! Looking like it is fresh out of the restoration shop, this 1967 Malibu has had an engine swap for the better, now upgraded to 1969 427ci V8 with aluminum heads. While we dont know exactly how long ago the car was restored, we can say it literally looks like it was yesterday. Rally wheels, raised white letter tires, near perfect bucket seat interior, and power steering, power brakes and the SS moniker, definitely one of the highlight cars to take in and consider for the serious Malibu fanatic, right here in the hallowed former mall halls of Classic Auto Mall. Exterior This sweet SS clone wears clean sheet metal which is under correct Marina Blue paint retaining its luster and then some with only a few minor chips and notable runs in the clear coat. Also, the addition of SS 427 badging, the shiny front grille and bumpers which are very well kept and shiny with no rust or dimpling. Of special note is the custom aluminum front chin spoiler just below the front bumper. The sides exude overall simplicity and certainly are very conservatively adorned with mere 427 Turbo Jet crossed flags, Super Sport moniker, and some snappy chromed window surrounds, this car otherwise looks like the true conservative. Between the front fenders is the twin domed and trimmed SS hood and overall the body is not overdone, gaps are nearly perfect for the steel and the rear wrap around gridded taillights with the black roll panel badged with SS is just icing on the Marina Blue cake. Lest I forget to mention the raised white letter tires with the polished Chevrolet Motor Division/Disc Brakes badged wheels with gleaming deep dish trim rings. Interior With a swing of the doors and you are getting a coming attraction preview of what wonders never cease to amaze you inside. The door panels are bright blue vinyl, and have horizontal stitched tucked roll panels, some chrome trimmings and are near perfection. Inside low back buckets with more tuck and roll inserts and smooth bolsters and some thin chrome trim surrounding the tubs, are stars in this interior sea of blue. The rear bench has a similar pattern only in long form and is pristine. All this floats in beautiful blue carpeting which covers Hushmat sound deadening panels, and on either side of a 1967 styled center console. This houses a glovebox, and a tall chromed ball top long armed Hurst shift lever and a centralized fuel gauge. The dash is all original with the strip which houses the lights, ignition, and wipers being on the top of the gauge cluster. A left side mounted aftermarket tachometer hangs just next to the gauge cluster. The drivers wheel is original and shows nearly no wear what-so-ever. Up high is a fairly tight blue headliner. A shout out to the trunk which has been completely relined with a fresh coat of gray trunk spray, a gray and black square pattern vinyl liner, full size spare tire, and jack accessories. Drivetrain Within the completely restored black engine bay presenting with all non corroded bolt ons and supple hoses and wiring resides a 1969 427ci V8 presenting in traditional Chevrolet orange. It also has some bling with Winters Foundry aluminum heads, a Winters aluminum intake manifold and a 4-barrel carburetor atop this healthy mill. All of this works in conjunction with a hydraulic roller camshaft and roller rockers to make a consignor stated 550hp on pump gas. Dressing up this monster big block are ribbed aluminum valve covers, a ribbed aluminum air cleaner assembly and various chrome dress ups. A rebuilt Muncie M20 4-speed manual transmission circa 1964/65 with a new Centerforce 11 clutch is strapped to the back and sends power back to a 12 bolt 3.55 geared Positraction rear axle. Undercarriage Nearly showroom, with only hints of road dirt and over spray on the black steel frame and flooring. With all straight structural steel, floor pans, frame and rockers, it is simply wonderful underneath. Dual exhaust snakes it way rearward through an x-pipe crossover exhaust and Pypes mufflers, eventually ending below rear quarter panels. Everything underneath looks new including the fully tubular independent coil spring front suspension, and the tubular 4 link with coil springs for the rear. We note new springs on the front suspension courtesy of the folks at UMI. Wilwood power front disc brakes and rear drums with new wheel cylinders are now on along with stainless steel brake and fuel lines. We note a custom made driveshaft down below as well to handle all the newly found ponies. Drive-Ability A hop inside the pristine interior, and its off I go to the test track. Here it handled and accelerated and took over the test track like it was a piece of cake. Smooth bias free panic stopping, and all functions were working during my hot laps. A good time was had by me with this car which is also an awesome cruiser, and head turner. Looking like a stripped-down mild-mannered grocery getter, this car is anything but. The beneficiary of a full restoration now can stand up to any current car in our halls and then some. Running circles around the competition with 550hp of big block power. This Malibu will never leave you feeling blue. 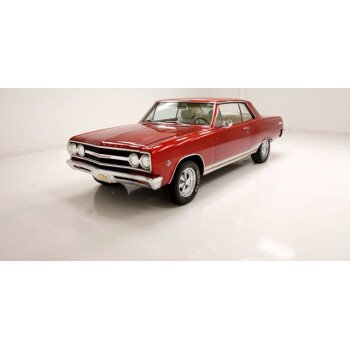 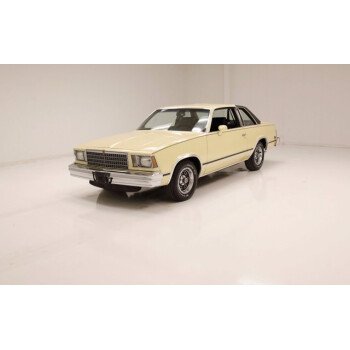 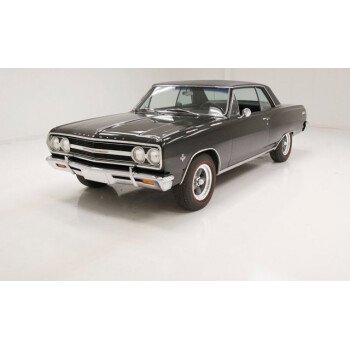 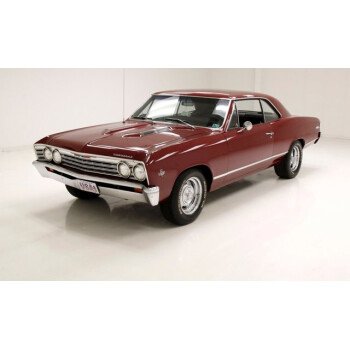