An exception car....first, the best year for MGBs....1966. Sufficiently 'new' to have a five main bearing engine yet with the best aesthetics of a pre 1968....steel dash, chrome bumpers, on and on.

Was in New Mexico for much of its life, nd we bought it from a fella who has owned it for 33 years.
35,000 AUTHENTICATED miles since new. Not a guess, rather, on the title it reads 'ACTUAL' under mileage. So, one of the lowest mileage MGBs on the planet.

Body is excellent, went over the body edges, lower doors, around the headlights, quarters, rockers, etc with my small magnet and it stuck everywhere. With beautiful red paint. And excellent chrome. No sign of plastic filler anywhere. And floors appear somewhere between flawless and perfect. No holes, no patches, no damage, no rust, no nothing. Except what you expect....floors.

Wire wheels with a good set of matching radials, last owner told us the transmission was rebuilt and a new clutch fitted less than 1,000 miles ago, we did a compression check....145-150 psi on our gauge, runs 75-80 psi oil pressure when warm, no smoke cold or hot. Doesn't get much better than those figures. And carbs are new, had a three into two set of headers connected to a new stainless steel exhaust system.

Radiator appears to be new, has an oil cooler, all of the gauges appear to have been reconditioned and all work perfectly, recently replaced kingpins (a big job) and springs, fitted with an alternator instead of a generator, spin on oil filter adapter, we can see a new steering rack (with the stickers still on) everything works, appears to never have had a radio....there is an antenna but no speakers and no stereo (does this mean that 'a kid' never owned this car?).

We found the calipers to be fairly new, new master cylinders, rotors, wheel bearings, all four shock absorbers rebuilt, all new polyurethane suspension bushings, pulled the rear drums and found new wheel cylinders and shoes, even the ORIGINAL cloth covered wiring harness is in excellent condition. And that is a genuine rarity.....after 54 years.

My first test drive, on an 87 degree day, after a fifteen minute drive, and at 190 degrees, was at near 80 psi oil pressure, and for the fun of it....took it down to a snail's pace in top gear, 800 rpm, and it pulled away smoothly. Try that in a modern car!

All in all, an exceptional MGB, impeccable road manners, lively acceleration, still retains the rare and desirable aluminum bonnet, maybe a bit of engine bay paintwork (which we can do), very little else, ready to take to a show. And as a ready to go classic sports car, just about the ideal compromise in price, ease of maintenance and repairs, all season use, and fun driving. 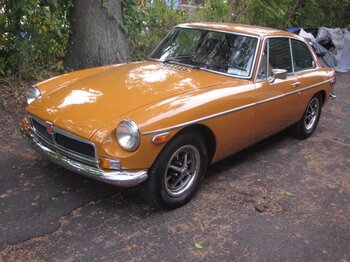 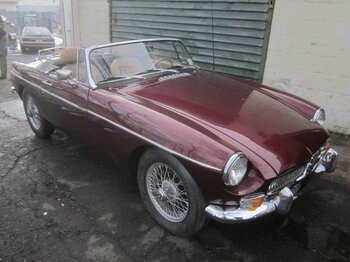 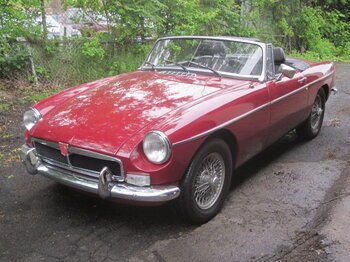