One of the best things about vintage Mustangs is their interchangeability, and how ripe they are for improvement in the resto-mod game. Not only do you get a wide variety of performance and styling parts you can use to customize your Pony, but thanks to the long-running Ford small block V8, upgrades can come from the factory as well as the aftermarket. Dig this diabolical 1966 Ford Mustang Convertible Restomod Wide-Body a sinister-looking droptop with a powerful V8 heart thats been turned up to 11, an AOD transmission, performance-oriented suspension, and a host of options. And lest we forget, its wrapped in a soul-stirring black tuxedo and features a beautifully executed bespoke interior. Before we get into the loads of performance hardware under the skin of this BEAST, just take a look at sexy it is. Wrapped in slick-black paint, the finish commands attention and looks just right on the iconic convertibles bodywork. Thanks to modern materials, its miles deeper and more luxurious than anything found in the 1966 color palette, with a great shine that looks awesome from even several feet away. Yet it still pulls off an inviting look that doesnt hide the Mustangs true identity behind all that extra flash. Instead, it shows off laser-straight sheetmetal, and its obvious that TONS of hours went into the bodywork before multiple layers of black paint were applied. Most of the build time was spent getting that wide-body kit to fit so well, transforming this droptop into an aggressively crouched predator thats further enhanced by its slammed stance. Add in the GT350 front valance, intimidating hood, and bulging side scoops and wheel arches and youre left with one of the coolest Mustangs weve ever seen. The finish shows incredibly well, borderline show-quality if not for a minor nitpick or two that easily escapes the majority of onlookers, and with the addition of subtle matte black/graphite stripes (a single stripe runs over the top of the car and matching decals are on the lower flanks) along with billet grilles, projector headlights, and hood pins/lanyards up front, the curb appeal is off-the-charts. Theres not a ton of chrome, but the flashy stuff around the glass, mirrors, door handles, taillight lenses, and rear bumper was polished up to near-blinding effect to contrast the black finish. The car was exceptionally executed and has been impeccably cared-for since the build was completed, meaning this stunning restomod will be turning heads and dominating car shows for years. At first glance, the all-new black interior might look somewhat stock, but upon closer inspection youll find excellent aftermarket touches throughout that really punch things up inside. Sculpted TMI front buckets are wrapped in elegant, Pony-style hides with suede inserts and are split by a custom-built center console trimmed to match that houses cup holders, a bespoke metal accent badge, and a TCI Outlaw ratchet-shifter. Gorgeous door panels at the flanks are the perfect complement and feature the same high-end whit stitching thats found throughout the cabin, including on the neatly outfitted rear bench, while plush black carpets and beautiful floormats insulate the car from the outside world. The original GT-style instrument panel is still in place, augmented with a big AutoMeter tach in the center thats flanked with a large speedometer and clock on either side. A sporty, leather-wrapped Flaming River steering wheel was mounted atop a Flaming River tilt column and billet racing pedals were swapped in below, giving the driver a dynamic cockpit that practically begs to be driven hard. Options include Vintage Air A/C, an LG tablet, and an AM/FM/AUX/BT unit that manages upgraded speakers stashed throughout the cabin. The power convertible top seals everything up, and the trunk is spacious even with the relocated battery, Pioneer amplifier, and aftermarket gas cap/filler in tow. The interchangeability of the Ford small block means you can easily shoehorn extra cubes into an early Mustang. In this case, the 302 V8 under the hood (aka the legendary 5.0L) was reportedly built and stroked to 347 cubes, further augmented with Edelbrock aluminum heads, a cold-air intake system with an 80mm mass-airflow tube, a fireball ignition, and an electronic fuel-injection system controlled via a MegaSquirt Gen 2 ECU mounted atop an aluminum throttle-body spacer. Its an incredible runner, with impressive and immediate power up-and-down the throttle, and the whole show stays cool thanks to a giant aluminum radiator with an attached Derale electric fan. A Flowmaster American Thunder back-kit adds a huge boost of performance to this lightweight Pony, and it sounds downright erotic burbling through the H-pipe and dual Flowmaster mufflers. The AOD transmission was reconditioned in 2013 and handles all the added power with ease, and it spins a built Currie 9 rear end filled with a Torino big-bearing, 31-spline axles, and a trac-loc 3.50 posi-traction set-up. Matching all that power is a lively performance suspension highlighted with Aldan coilovers, a Rod & Custom front subframe set-up, and power rack-and-pinion steering system up front, teaming with an RRS Watts link/torque arm rear suspension with QA1 coilovers out back. The car sticks to the road incredibly well, with tight steering and responsive handles in-and-out of the corners, and the power 4-wheel disc brakes with SSBC slotted rotors stop it on a dime. Flashy Aodhan wheels were finished in black chrome and tuck perfectly into the stretched wheel wells, and they come wrapped in 315/25/19 Toyo low-profile radials that are sticker than bubble gum. Dialed-in and ready to rock, this full-blown custom Pony comes documented with a stack of receipts that spell out the one-of-a-kind restoration. As one of our showrooms top performing vehicles its ready to dominate for years to come, and maybe you can help it do exactly that? Call today! 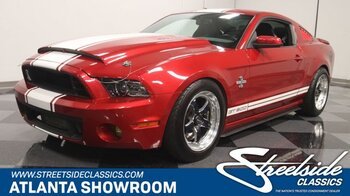 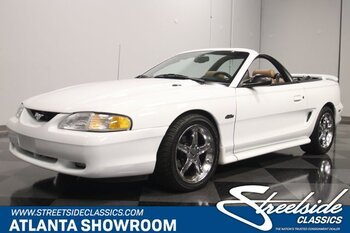 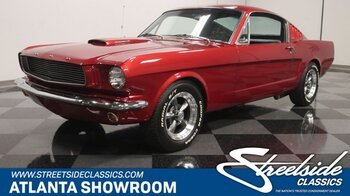 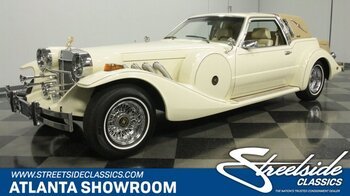