This 1966 Ford Mustang Convertible isnt your grannys Sunday cruiser since this powerful pony is is loaded with performance upgrades and creature comforts. When the Mustang debuted in the middle of 1964, it was an instant hit and the product line would carry Ford through the muscle car era and into the decades to come. Originally, the Mustang was targeted at the younger generation of car buyers who were looking for sportier cars rather than the big boats driven by their parents. These new youthful purchasers also were looking for a car that was inexpensive but still offered great performance. Given that the first 2 iterations of Mustangs were wildly successful cars for Ford in terms of sales, the 1966 version only featured a few minor tweaks. The most notable change between the 65 and 66 Mustang was the new grille which featured a floating Mustang logo and horizontal grille bars. Under the hood on this particular 1966 Mustang is an upgraded 289 Cubic Inch V8 engine that is paired with a single 4 barrel carburetor. The 289 V8 is hooked up to a 5 speed manual transmission that makes this Pony Car an absolute blast to drive! The engine has been outfitted with numerous performance upgrades including aluminum heads, an aluminum intake, headers, an aluminum radiator with electric fans, an MSD distributor, upgraded coil and more, and traction bars have been added to the rear suspension of the car. This restomod Mustang is also loaded with options! With power steering getting in and out of those tight spaces at car shows or even in your garage is made much simpler, and the overall driving experience is much improved. All 4 wheels are equipped with power disc brakes for improved stopping power especially with all that power under the hood. This Mustang also has been upgraded with a later model Air Conditioning unit so that you can stay cool even on the hottest summer days. The black vinyl power convertible top is in fantastic condition and works great! The exterior on this Mustang has been refinished in a beautiful Grabber Orange basecoat/clearcoat along with black painted racing stripes. This Convertible Mustang rides on 4 American Racing Rims with P215/60R15 black wall Radial Tires which completes the exterior look of the car. The interior on this Mustang is breathtaking! The front bucket seats and rear bench seat are upholstered in black vinyl for that classic Mustang look. The dash, door panels, and steering wheel all appear to be in fantastic shape and in their mostly stock configuration. The dash is equipped with a 140 MPH speedometer, temperature gauge, amp gauge, oil pressure gauge, fuel gauge, and a Bosch 8,000 RPM aftermarket Tachometer was added. Additionally, a retro-style entertainment system is incorporated into the dash with the amplifiers placed in the trunk. The air conditioning unit is tucked neatly under the dash as well. Whether youre looking for your very first classic Mustang or your stable is already filled with the collectible Ponies, this 1966 Ford Mustang Convertible would make an excellent choice. Give us a call today! 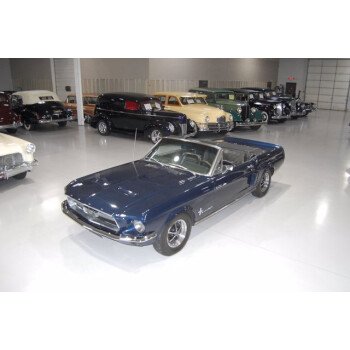 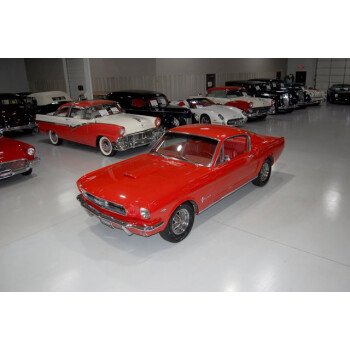 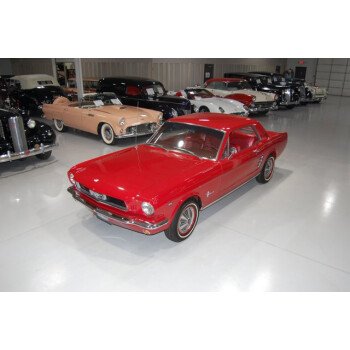 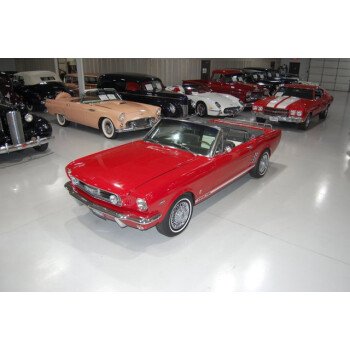