Minimalistic with maximum function, thrift, not revolutionary in concept or execution, a compact grocery getter, pick the kids up kinda car, here in our Hallowed Halls. It is nearly so pedestrian you would walk by it and never notice it. However, this does not detract from its charm, an important place in Chevrolet history fulfilling a need for the masses. Breathe in this always garage kept 1966 Chevy II Nova hardtop with its upgraded engine, new brakes, fresh seats and new shocks. Exterior With a respray of shiny red on the body and roof, we see nicely applied paint with a few areas of repairs showing through, competing equally with beautiful chrome and trimmings. A straight grille, single fender mounted headlight and nicely minded gaps throughout, this car has obviously received its fair share of TLC in its lifetime. Some side spear trimmings dress up the long slab sides and Camaro SS style hood stacks have been added to detract from this fairly mild-mannered looking car. Rally wheels in 15-inch format with blindy caps and trim rings are wrapped in 225/70R14 like new blackwall rubber, and if you look closely youll catch a glimpse of a touch of Nova SS feel from the body. Make some noise! Interior Straight but lightly soiled white vinyl and some chrome accenting, cranks and handles and some tuck and rolling for the door panels framed by black sills above and black carpet down low are a preview of whats to come. Slipping inside, snappy new 60s style buckets grab your eye and your butt with tuck and roll bolsters, and smooth inserts in black vinyl. These buckets have low rise headrests atop their backs and in rear is a matching styled bench that looks like its never been sat in. Black carpeting is flooding the floors and in front above the carpeting is an original simple dash. Riding the hump between the buckets is a black console with a brushed aluminum and chrome topper that holds the shifter and small storage compartment. On the steering column is now mounted a Sun Super Tach II tachometer and this fronts the original gold padded dash with the factory instrument cluster. Dash central has an aluminum panel with more gauges where the factory radio once did reside. Above is a tight but torn white vinyl headliner. It is missing the dome light cover and shows a fair amount of staining and mold. Drivetrain With the original engine long gone, a 350ci V8 now resides between the red painted inner fenders. It has Edelbrock aluminum heads and a 4-barrel Edelbrock 600cfm carburetor with a polished intake. On the back is a TH400 3-speed automatic and we note that headers are on. The block is painted the beautiful GM orange/red, but its hard to spot with all of the chrome accenting that has been added. Now appearing on the rear axle which is in 10 bolt format. Its just a quick grocery getter now! Undercarriage Underneath is just factory black with even little to no dirt, and some light surface rusting. We note some prior repairs to the flooring but all is now structurally solid. Traction bars are on back along with leaf springs and drum brakes. In front independent coil springs and more drums. The aforementioned headers snake their way down from the engine and connect to dual exhaust with Turbo mufflers. All very clean, a nice job under here with new shocks all the way around as well as new brake drums, hoses, hardware, wheel cylinders and master cylinder. Drive-Ability Out test driver called this a tad stodgy in appearance, but said it was a pleasure to drive, as it started quickly, drove great, all options worked flawlessly and was an overall tight car to drive. Definitely an A on the report card. A very nice upkeep/restoration with a now bigger engine, and some performance extras. Owned by our consignor for the past 3 years and has been in his family for the past 25, still looking very mid 60s on the interior and its pretty much suburban transportation preserved nicely, but with an underlying kick. The beauty of an engine bay, all ready to play like its 1966. 115376N165003 1-Chevrolet 15-Chevy II Nova 400 Inline 6 Cylinder 37-2 Door Hardtop Sport Coupe 6-1966 N-Norwood, OH Assy Plant 165003-Sequential Unit Number 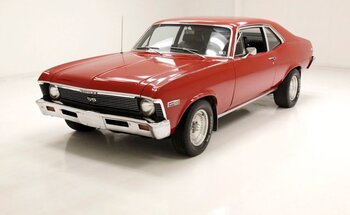 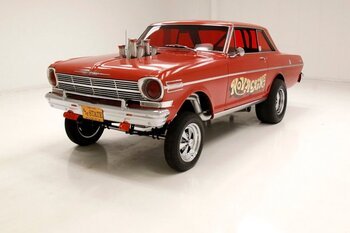 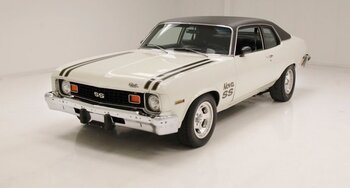