Considered by many to be the best year, this 1966 El Camino isnt your average El Camino and has been treated to a comprehensive frame-off restoration and customization. Built with outstanding components and with a gorgeous paint job and stunning interior, this El Camino is a show stopper! Powered by an LS V8 mated to a 4L60E Automatic Transmission with Overdrive, modern amenities such as Vintage Air A/C, Power Wilwood Disc Brakes, Power Steering and Coil-Over Suspension ensure excellent drivability. Features: - LS 5.7L Fuel Injected V8 - 4L60E Automatic Transmission W/Overdrive - 4 Wheel Power Wilwood Disc Brakes with Slotted and Drilled Rotors - Power Steering - UMI Performance Suspension - Tubular A-Arms - Front and Rear Sway Bars - Aldan Coil-Overs front and back - Custom Green Metallic Paint with All trim in Gunmetal Gray - Custom Interior in Mocha Brown - Tilt Steering Wheel in Custom Color - Dakota Digital Gauges - Custom Red Oak Wood Bed - Custom Engine Cover Simply stated, this is a one of a kind El Camino with the perfect stance and growl. Great lease rates and Financing also available on any of our inventory! Buy Sell Trade Consignments Welcome! Please email concierge@fusionluxurymotors.com or call 1-818-773-8181 About the El Camino: Ford Australia was the first company to produce a coup utility as a result of a 1932 letter from the wife of a farmer in Victoria, Australia, asking for a vehicle to go to church in on a Sunday and which can carry our pigs to market on Mondays. Ford designer Lew Bandt developed a suitable solution, and the first coup utility model was released in 1934. Ford introduced the 1957 Ranchero, and established a new market segment in the U.S. market of an automobile platform based coup utility. In 1959, Chevrolet responded with the El Camino to compete with Fords full-sized Ranchero. Chevrolet reintroduced an all new, mid-size El Camino four years later based on the Chevrolet Chevelle. The 1964 model was similar to the Chevelle two-door wagon forward of the B-pillars and carried both Chevelle and El Camino badges, but Chevrolet marketed the vehicle as a utility model and Chevelles most powerful engines were not available. Initial engine offerings included six-cylinder engines of 194 and 230 cubic inches with horsepower ratings of 120 and 155 HP respectively. The standard V8 was a 283 cubic-inch Chevrolet small block with two-barrel carburetor and 195 HP with optional engines including a 220 HP 283 with four-barrel carburetor and dual exhausts. Added to the El Caminos option list during the course of the 1964 model year were two versions of the 327 cubic-inch small block V8 rated at 250 and 300 HP-the latter featuring a higher compression ratio of 10.5:1, larger four-barrel carburetor and dual exhausts. El Caminos also featured Air shocks in the rear, as well as fully boxed frames. The shocks were continued over all generations, the frames only thru 1967. The 1965 El Camino received the same facelift as the 65 Chevelle, with a more pronounced V-shaped front end, and a higher performance L79 version of the 327 engine rated at 350 HP that was also available in Chevelles. Most of the other engines were carried over from 1964, including the 194 and 230 cubic-inch Turbo Thrift sixes, the 195 HP 283 cubic-inch Turbo-Fire V8 and 327 cubic-inch Turbo-Fire V8s of 250 and 300 HP 1966 In 1966, GM added a 396 cu in (6.5 L) V8 engine to the lineup rated from 325 to 375 HP. The 1965 327 would run low 15s in the 1/4 mile (at some 90 mph), while 1966 to 1969 models were easily into the mid- to upper-14s. New Sheetmetal highlighted the 1966 El Camino, identical to the Chevelle. A new instrument panel with horizontal sweep speedometer was featured. Inside, the standard version featured a bench seat interior and rubber floor mat from the low-line Chevelle 300 series, while the Custom used a more upscale interior from the Chevelle Malibu with plusher cloth-and-vinyl or all-vinyl bench seats and deep twist carpeting, or optional Strato swivel bucket seats with console. A tachometer was optional. 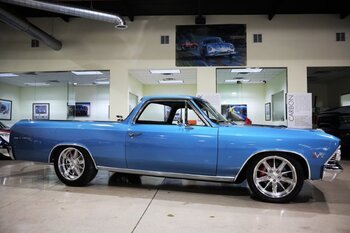 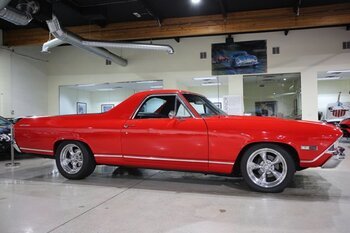 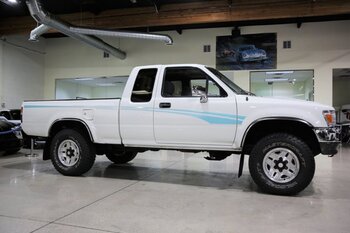 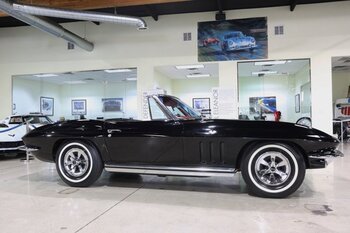