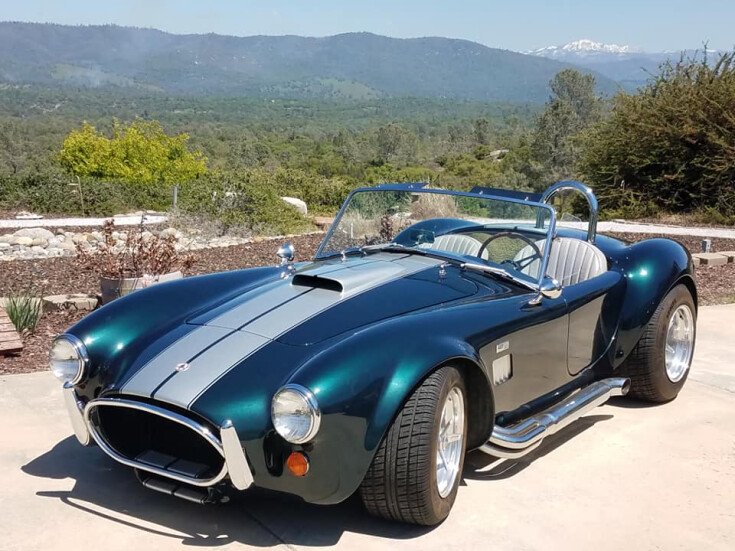 RON BUTLER BUILD - #83 of only 104 built - This stunning convertible was recently appraised at $56,500 by Auto Appraisal Network. SB100-California Smog exempt for life!  It comes with a leather tonneau split cover, original paperwork, parts list/diagram, car cover, (and SIGNED by Ron Butler manual and color brochure that he gave me in person - I went to meet him 2 years ago with the car to his Central Coast California ranch, where he went over the car with a fine tooth comb and immediately noticed my brake fluid was a little low and couldn't help himself from filling it - he is in two of the photos I've included.)  When not showing or going for an occasional drive, it is garaged and covered.  Has ALWAYS been a California car - no snow, no rain, no rust!

Ron Butler was the former crew chief for Carroll Shelby in the 60's and is considered to have built some of the best reproduction Cobras still available. When Shelby Cobras whipped Ferrari and captured the 1965 World Manufacturing Championship, that same year Ron Butler was awarded the Sebring 12-Hour 'Best Mechanic's Trophy.'

Butler melded his racing skills and knowledge of Shelby's Cobra into creating his very distinctive replica chassis, which boasts a 50/50 weight balance distribution for superior performance and handling."I've counted the number of companies (worldwide) making the Cobra and there are 87," said Shelby, now head of Shelby Automobiles Inc. of Whittier, a high-performance consultant for Dodge. "But his (Butler's) Cobra is a good one. Ron doesn't do anything that isn't first class and he is one of the few Old World craftsmen left." -LATimes 1988.

In the 1960's, Carroll Shelby approached British car company AC to build a car that could fit a V8 engine and Ford for the engines to beat Ferrari.  The Cobra went on to make race history!  Every successful race team requires talented people like Ron Butler, who was deeply involved in the mechanics of the Cobra racing program.

The original Shelby Cobras will always continue to be the most sought after and valuable (commanding pricing 500,000 to well over $1 million today.)  However you can get this  car built with as much quality by someone that actually worked on the originals for a reasonable price and be just as exhilarated while it roars along the highway and attention getting as the originals where ever you go!

Here are some quick highlights (in the photos I've included have 2 page list of items):

Pink slip in hand.  It was built in 2001.  The original owner sold the car when he left California to retire to Montana.