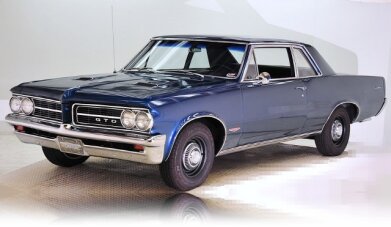 We are pleased to present a fine example of the iconic 1964 Pontiac GTO that we will be giving away this New Years Eve.  Entries into the drawing can be purchased at www.badboygiveaways.com.  Funds raised for this giveaway go to benefit Homes For Our Troops, a registered 501(c)(3) organization.

This well-documented piece of history was purchased from Majestic Pontiac of Los Angeles in the summer of '64.   The car is powered by the 389 four barrel paired with a two speed PowerGlide. It rolled off the lot with an impressive list of factory options such as power windows, steering and brakes, center console, door edge guards, and a courtesy light package. It made its way to Ohio in the mid-70s, and was taken on trade by a Cleveland Pontiac dealer where it was acquired by the owner's son who enjoyed it until about two years ago. During his tenure, the vehicle was garage kept and remained in remarkable condition.

In the early 2000s, the GTO received a high-end restoration which included refinishing in the ultra-rare Sunfire red metallic paint. The original white interior was thoroughly refurbished to like-new condition, and a few options were added to its already extensive list of factory options. These include such features as a vacuum gauge, power seats, and antenna.

Join us for this once-in-a-lifetime opportunity to support a great cause and have a chance to win this exquisite representation of an American muscle car.

EmailEmailDirectionsWebsite
Suspect Fraud?
Contact Dealer
Feedback
Login
Become an Autotrader Dealer
© 2023 Autotrader, Inc. All Rights Reserved. "Autotrader" is a registered trademark of TPI Holdings, Inc. used under exclusive license.
By using this service, you accept the terms of our  Visitor Agreement.  Privacy Statement.  Do Not Sell My Personal Information.  Do Not Process My Sensitive Information.  AdChoices  Accessibility Statement
›