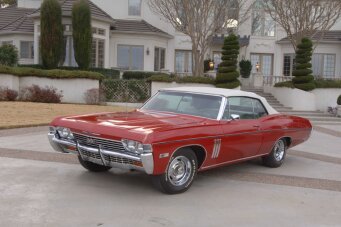 This 1964 Chevrolet Impala SS is a true Super Sport and is ready for some serious cruising especially with its fantastic options! When the Impala made its debut back in 1958, it was just the top-of-the-line trim package for Chevys premium Bel Air model. It wasnt until the following year when it became its own separate model line and in 1961 the Super Sport package was introduced as a dealer installed kit. In 1964, the Impala SS became for the very first time its own sub-series of the Impala and it was the plushest and sportiest passenger car in Chevrolets lineup at the time. With leather grained vinyl front bucket seats, a center console with console-mounted shifter, and distinctive SS trim throughout, the interiors on the Impala Super Sports were top notch. On the outside, there was no mistaking an Impala SS since they were trimmed with special SS full wheelcovers, a silver swirl-pattern anodized inserts on the decklid, along with various Super Sport specific trim on the quarters and decklid. With their decadent looks, both inside and out, the 1964 Impala SS became an icon. Additionally, the 64 Impala continued its pop culture noteriety well beyond the hot rod era of the 60s and 70s when lowriding rose to prominence with many famous rappers in the 90s and beyond, including including Snoop Dogg and Dr. Dre, even rapping about rollin in their 6-4s in reference to the iconic lowriding 1964 Impalas. This particular 64 Impala SS retains its stock configuration having not yet been converted into a lowrider and it comes to us out of Texas where it resided most recently. Under the hood on this Impala SS is a 327 Cubic Inch V8 engine paired with a single 4 barrel carburetor that pushed out 250 horsepower back in 1964. The 327 V8 is backed by a Powerglide Automatic transmission ensuring that just about anybody can take this 64 Impala for a spin around the block. Exhaust exits the 327 V8 via a dual exhaust setup that gives this car a nice throaty sound. This 1964 Impala SS is loaded with desirable options! With factory air conditioning, you can stay cool while cruising even on the hottest summer days. Power brakes make bringing this 2 door hardtop to a complete stop much easier and improves the overall driving experience on this 1964 Chevy. With power steering, maneuvering in and out of those tight spaces at car shows or the local drive-in a complete breeze and turning feels almost effortless. The chrome and brightwork around the exterior of this 64 Impala SS is in wonderful shape and shows well. Riding on a set of thin whitewall radial tires with Super Sport wheel covers, this classic Chevrolet has a great look and and even better ride. The exterior on this Impala Super Sport has been correctly refinished in a beautiful Palomar Red just how the car came when it rolled off the St. Louis factory line. The interior on this 1964 Impala SS is luxurious! The front bucket seats and rear bench have been correctly reupholstered in Silver Vinyl. The dash, door panels, steering wheel, and center console are adorned with the special Super Sport emblems and appear to be in their stock configuration. The engine turned dash is equipped with a 120 MPH speedometer, fuel gauge, clock and push button AM radio, along with indicator lights for engine temperature, oil pressure and generator function. Whether youre buying your first classic car or youre adding to your existing collection, this 1964 Chevrolet Impala SS would make an excellent choice. Give us a call today! 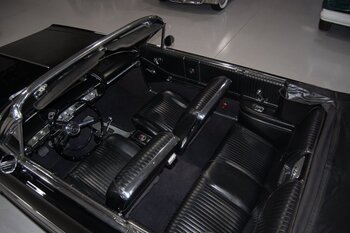 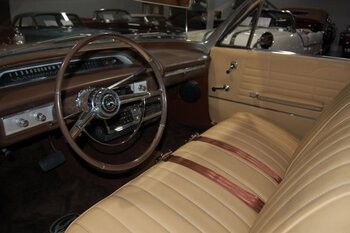 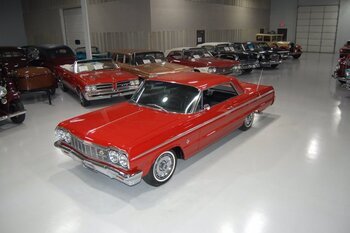 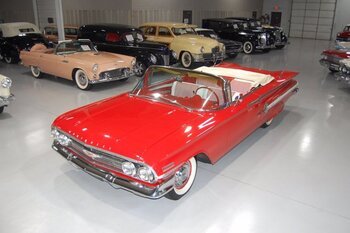