Introduced in September of 1962 the MGB picked up where the MGA left off which turned out to be an even greater success than its predecessor. The Bs crisp slab-sided styling was simple yet sophisticated with an overall more upscale and modern appearance. Engineers employed unitary construction for the first time with the live rear axle supported by leaf springs bolted to the shell and independent front suspension bolted to a separate subframe. The proven setup gave the MGB predictable handling that was more than a match for its 95 horsepower 1.8-liter inline-four. While the B wasnt notably faster than the A it was a superior all-rounder. In the first full year of production MG sold more than 30000 Bs representing a whopping 75% increase in output over the MGA. Sales remained healthy for most of the MGBs impressive eighteen-year production run and it was consistently among the best-selling roadsters in the world. Over the years and through numerous variants the MGB earned a place as one of the most iconic widely cherished British roadsters of all time with over a half-million produced and a loyal following of passionate enthusiasts.This 1963 MGB is a rare and desirable early pull-handle model from the first full year of production. From May 1962 through April 1965 the MGB had pull-style exterior door handles which changed to the more conventional pushbutton type for the remainder of production. Enthusiasts consider pull-handle cars to be the purest form of the MGB roadster and count among the most desirable of the whole range. This beautiful car received a nut-and-bolt rotisserie restoration completed in approximately 2010. It retains its original numbers-matching engine and is finished in its original color scheme of Old English White over red upholstery and a gray hood. The early history is unknown though the British Motor Industry Heritage Trust certificate reveals it is an original US-market car completed in June 1963 and equipped from new with wire wheels heater ashtray and foldaway hood.Photos of the car prior to restoration show it was complete and original but overdue for refurbishment. It was subsequently taken down to the bare metal which was remarkably sound and meticulously rebuilt from the ground up. The result of all that effort is impressive and the car now shows beautifully with excellent paintwork and crisply defined straight panels. Exterior trim and brightwork have also been fully restored and are in superb order and period-correct details include Lucas headlamps and silver-painted wire wheels.The cozy two-place cockpit is faithful to original specs trimmed in red leather with white piping red carpets and period-correct detailing. As an early model it features the stylish wrinkle-finish black dash panel and lovely three-spoke banjo-style steering wheel. Other details include the early shifter proper switchgear and Smiths instruments. The restorers went the extra step to fit a correct gray vinyl soft top as fitted at the works. Similarly the boot is lined in the proper materials and well detailed.MGs robust 1.8-litre OHV inline-four was rated for a peppy 95 horsepower and its raspy soundtrack was enough to provide the driver with at least the impression of speed. While 0-60 in 12 seconds sounds like a lifetime today it was quite respectable in its day and the gutsy little engine is the ideal match for the nimble chassis. The engine bay of this example is impeccably detailed to concours standards. The four is painted the correct shade of MG red and details included proper air cleaners hose clamps wiring looms and decals. It is a pleasure to drive with the snappy performance and grin-inducing handling that endeared the MGB to so many enthusiasts worldwide.One drive is enough to see why the MGB is second only to the Miata as the best-selling roadster of all time. While Bs are abundant in the market few are restored to such a level as this fine example. Whether on a concours field or buzzing along your favorite country lanes this outstanding MGB will not disappoint.Offers welcome and trades considered For additional details please view this listing directly on our website https://hymanltd.com/vehicles/7032-1963-mg-b-roadster/ 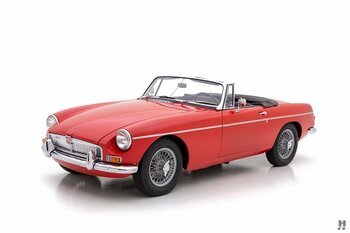 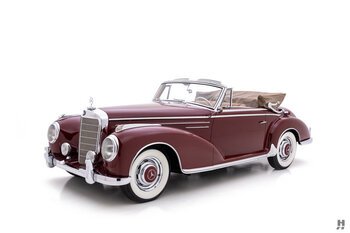 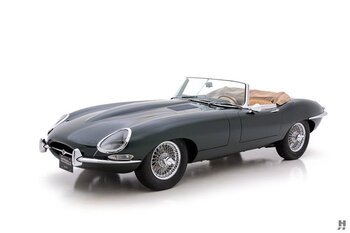 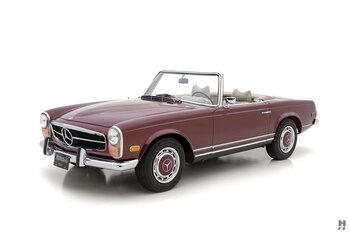