West Coast Classics are proud to present a highly desirable example of the third generation of Thunderbirds; a 1962 Ford Thunderbird Sports Roadster with the 390 c.i. 300HP 4BBL V8 engine matched to its original Cruise-O-Matic transmission with overdrive in completely rust free and restored condition in its original factory Rangoon Red color (Code J) paint with the Black (Trim code 56) vinyl interior and with factory options including bucket seats, full carpeting, with front console, power steering, power brakes, power windows, power door locks, power front seats, original AM radio, heater & defroster, full instrumentation, sequential turn signals, and obviously the unique swing-away steering wheel & the Roadsters trunk stored power convertible top with the car mounted correctly on its striking Kelsey Hayes chrome wire wheels with the deletion of the rear fender!The cars original factory added options includeWSW ($42)Power Lift Windows ($106)Power Driver & Passenger Seat ($184)Push Button Radio ($112)Windshield Washer ($13)Outside Mirror ($5)Heavy Duty Battery ($7)The Thunderbird was redesigned in 1961 with sleeker styling from its previous Squarebird design that gave the bird a renown bullet-lie appearance with an all new bodyshell featuring a severely pointed front end and the car enjoyed a smoother ride with much improved handling and soundproofing. The interior design featured a contoured dash that curved at its outward ends to blend in with the door panels and the model boasted the first Swing-away steering wheel. A new engine, the 390 c.i. 6.4L V8 was standard and mated to a three speed automatic transmission. A vinyl roofed Landau option with simulated S bars was added to the line up in 1962 as was the legendary Sports Roadster for convertible models.The Sports Roadster had a special fiberglass tonneau cover for the rear seats which gave the car the appearance of being a two seater roadster like the original Thunderbirds from 1955-57. Priced at over $5,500 when new only 1,427 were built in 1962 and just another 455 in 1963 making this one very rare and collectible Ford.Newly optioned for 62 was an upgraded version of the 390 c.i. V8 named the M code after the designated M used as the engine code in the VIN number of the very few and rare cars equipped with this upgrade. The M code version of the 390 c.i. V8 was equipped with no less than three 2 barrel Holley carburetors and produced 340HP. These M code V8 Thunderbirds are exceptionally rare with some reports showing only some 200 in total being built during its production years of 1962-3 and obviously very few are left remaining on the roads today! This particular car boasts its original and highly striking Rangoon Red factory color paint with a beautiful Black bucket seats interior and with the floor boards, trunk and all the typical rust-prone areas all completely solid and rust-free - obviously a mostly always garaged and cherished car since new. The original spare wheel with its jack is in the trunk and the car rides on new Coker tires mounted on its correct Kelsey Hayes chrome wire wheels. The 390/300HP Thunderbird 4 barrel V8 engine is extremely strong and powerful and this particular car drives extremely well and must be driven to be fully appreciated. The transmission shifts smoothly through all the gears and the temperature always remains cool! This is a rare opportunity to own a great daily driving and unabused example of an obviously always garaged rust free 1962 Ford Thunderbird Sports Roadster in very fine condition throughout and an outstanding example of one of the outstanding Ford designs of the sixties which has high repute for both its beautiful lines and smooth fast performance. In summary, this is one rare and very sought after and obviously well maintained and rust free example of this increasingly desirable and collectible 1962 Ford Thunderbird Sports Roadster and loaded with desirable factory options and a perfect addition to any Ford enthusiasts collection or indeed for any American classic car collector! 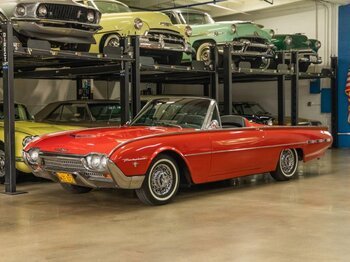 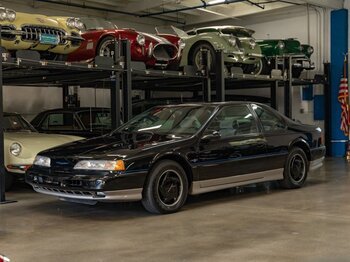 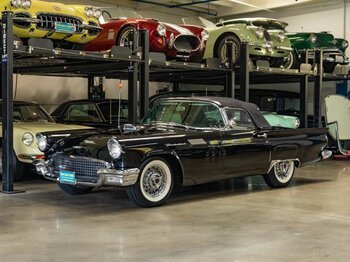 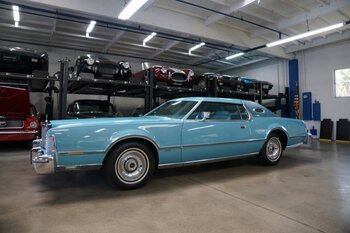