1961 Chevrolet BelAir The Bel Air was introduced in the 50s and quickly became one of the most recognizable vehicles of the decade. Production lasted a lot longer than that though as the Bel Air continued to be used through 8 generations lasting until 1981 at which point production was limited to Canada. They were heavily redesigned multiple times throughout their run as cars transitioned from the more box look of the 50s into the more streamline look of the 60s. 1961 introduced the 5th generation and received one of those complete redesigns. The wheelbase remained the same but the bodies had a new look and were reduced slightly. Bel Air was 1 level below the Impala and have remained very sought after vehicles. This clean 61 is a 2 door hardtop meaning it incorporated the extremely iconic swept back "bubble top" roof styling as opposed to the less popular sedan which had the squared off roof. This car is an extremely nice restomod that has been completely redone. The body is very solid and painted in a nice vibrant Red paired with a White top. The White is a perfect accent on the car especially combined with the White stripe. The chrome and stainless on the car is in immaculate shape throughout. It has the double front headlights and in back the double taillights have been modified with blue dots in the center for a nice old school touch. It sits on a set of 17 inch custom Foose wheels that really give it a tough look. Under the hood is a smooth running crate 350 cubic inch V8 crate motor fitted with a 4 barrel carburetor, polished intake, finned Edelbrock valve covers, chrome billet air cleaner, chrome alternator, HEI Ignition and cool flex hoses. The engine compartment is well done with nice Black inner fenders, Red painted heads/block and Red plug wires for a clean look. Cooling is not a problem even in the Texas heat thanks to the Champion aluminum radiator and electric fan. It has a great sound with Hugger headers into dual exhaust. Paired with the motor is a TH700R4 Automatic with overdrive transmission and B&M shift kit moves through the gears smoothly. The car is set up to run down the highway well with 3:73 gears in back. It really is a nice driver you can cruise around in anywhere. The interior is in excellent condition and has the same Red and White theme as the rest of the car. The upholstery is a combination of cloth and vinyl done in a stock style. A majority of the seats are in Red but it has White/Black/Silver stripes running along the edges. The carpet looks great and it has custom BelAir floortmats. Mounted to the floor is a t-handle ratchet style B&M shifter so you can put it in Drive and go or move through the gears yourself. The dash is painted Red with the gauge bezel area painted White. It utilizes a combination of an original speedometer with aftermarket Autometer gauges. The tilt polished steering column is fitted with a tachometer and billet steering wheel. It has been upgraded to a Pioneer stereo with 6 br 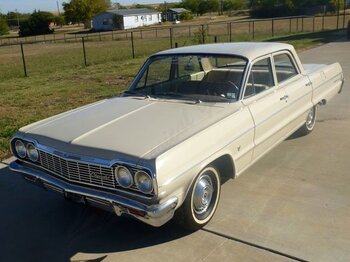 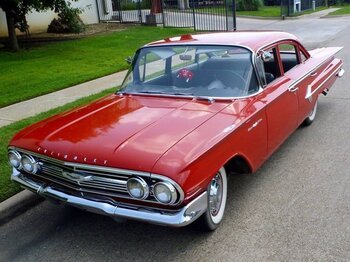 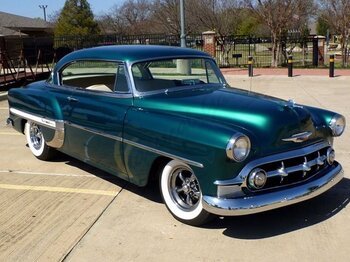 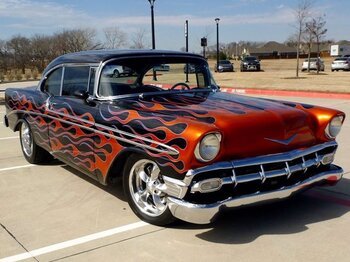