Introduced in May 1957 the highly refined XK150 built on Jaguars rich heritage including the ground-breaking XK120 and evolutionary XK140 before it marking the third and final evolution of the brilliant original XK-series sports cars from Jaguar. While bearing a strong familial resemblance to its predecessors the XK150 was slightly wider and featured cleaner styling with a higher and more subtle beltline replacing the trendy cut-down doors characteristic of the XK120 and XK140. A wider grille element improved engine cooling and a modern one-piece curved windscreen provided improved forward visibility. At launch the XK150 was available in both Fixed Head (FHC) and Drophead Coupe (DHC) body styles with the Open Two-Seater (Roadster) following them to market by March 1958.From the start Jaguar consistently applied the many lessons to be gained from competition to its sporting road cars which steadily grew in their performance and sophistication. In a clear case of racing improving the breed the XK150 was Jaguars first road model to be equipped with Dunlop four-wheel disc brakes which were crucial to the companys second Le Mans victory with the XK-derived C-Type sports racer in 1953. Servo-assisted brakes were standard for the road-going XK150 providing heightened driving ease.Until late 1959 Jaguars already-legendary XK DOHC inline six powered the XK150 in 3.4-liter form with a stout 190-bhp rating in standard tune or 210-bhp in SE spec with dual exhaust. Performance was significantly heightened with the legendary S specification discreetly announced by stylized chrome emblems to the doors just below the windshield frame. Jaguar rated the XK150 S 3.4 at an impressive 250-horsepower thanks to significantly improved breathing with triple S.U. carburetors a revised intake manifold and high-flow cylinder head. It also featured revised engine bearings and an uprated clutch and flywheel for additional durability necessitated by the 130 mph top end.While the XK150 was designed strictly as a fast GT-oriented road car without racing pretentions its competition heritage was peerless including Jaguars victories at the grueling 24 Hours of Le Mans in 1951 1953 and 1955-57 with the XK120 C-Type and D-Type. A few committed privateers campaigned the XK150 to good effect including the GT-class win at the 1960 Tulip Rally and fast-rising American driver Walt Hansgens creditable third-place podium finish at Bridgehampton in June 1960.This beautiful example of Jaguars high-performance XK150S features the sportiest Roadster body style or the Open Two Seater (OTS) configuration in Jaguar parlance. As offered it continues to benefit most handsomely from a superb restoration completed in 2010 by the marque experts at XKs Unlimited of San Luis Obispo California. Sporting its excellent and original color combination of black paint over red leather upholstery this compelling XK150S is a former high-scoring JCNA show car that has been enjoyed by the prior owner as originally intended and tuned and maintained by the respected professionals at British Auto Repair in Scottsdale.Power is delivered by the original numbers-matching 3.4-litre S inline-six which is highly detailed and equipped with triple SU carburetors and backed by an updated 5-speed manual gearbox. Accompanying items include a spare wheel/tire roadside jack and factory grease gun all housed within the correctly finished trunk compartment. Documents on file include a corresponding Jaguar Daimler Heritage Trust certificate restoration photos and stacks of restoration and service receipts. For the purist the correct four-speed gearbox is also included.Jaguar produced approximately 800 XK150 S OTS roadsters and this car is one of just left-drive 72 US market examples built in 1959. This sporting icon represents one of the ultimate expressions of the classic Jaguar XK sports car line which set the stage for the E-Type to follow. As such it stands as a superb pick for classic rallies touring events and open-air fast-road enjoyment. Offers welcome and trades consideredFor additional details please view this listing directly on our website https://hymanltd.com/vehicles/7238-1959-jaguar-xk150s/ 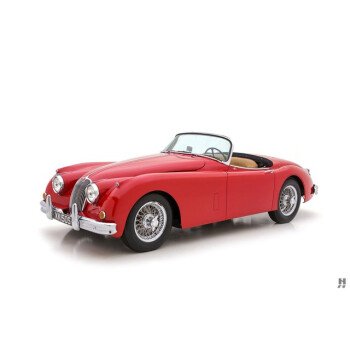 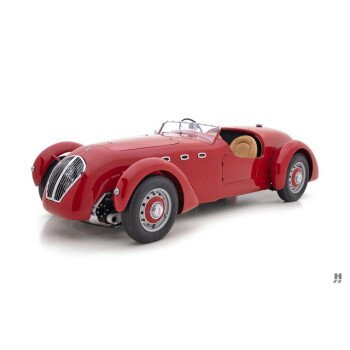 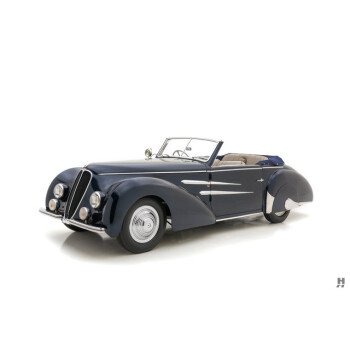 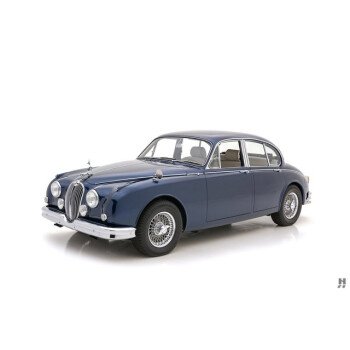