1959 Chevrolet Corvette Roadster When it comes to universal appeal, few cars bring it quite like the Chevrolet Corvette. While a lot of its competitors placed an emphasis on speed, exclusivity, or some other singular piece of the puzzle, the Corvette did its best to be the attainable sports car for every man. A prime example of that best all-around mindset is this sweet C1 roadster. It wraps timeless American style around a trusty 4-speed and 283 cubic inches of hot Chevrolet small block. Looking for some choice vintage muscle to take to the streets or the show? Check out this awesome Vette! Sitting in its fully restored glory, there have been a few changes and upgrades, but mostly it remains an original car, but better, due to the repair of some nagging problems this year Vette was known to have. All remedied now, and a turn key 60-year-old car, in very nice condition that has been given the once over by a mechanic after 12 years of careful indoor storage. Exterior Sealed in a traditional combination of Ermine White with silver coves, this cars smooth body was carefully restored but is now showing its age in a few areas. Small cracks in the fiberglass are noted at the tops of both doors as well as in the lower rear quarter panels, and one large rearward running crack has developed in the top inside of the drivers front fender right at the hood to fender gap. This may have been caused by an ill adjusted hood prop or someone over extending the hood while opening it. Also, the hood gaps, while acceptable, could be nicer and this flaw is most likely caused by the absence of a passengers hood latch assembly on the hood itself. Issues aside, the profile features good alignment, reflecting a crisp finish that compliments the newer a tight black canvas top. This bodys combination of form, fit and flash tells the world you have arrived and for some extra fun, a body matching restored Ermine White hardtop is included with the purchase. All chrome is showing in perfect condition and our eyes are drawn to the chrome toothy grill that glistens and reflects beautifully. Around back we are greeted with the taillights that are rounded into the rear quarter. Twin chrome rear bumpers bring up the tail of the car and the correct exhaust exits through each bumper section. Standard knockoff style wheel covers are on all 4 corners and are gleaming with pride. Interior As we swing open the beautifully paneled door, we are met with the classic fan semicircle in front of the steering wheel, which houses the speedometer. Directly below, a line of circles house the other fuel, temp, battery, and oil gauges and a large tachometer directly above and mounted to the steering column. All are in very good condition. Scanning more to the passenger side, a bracket in the center of the dash which is supported on the bottom by the hump, holds a Wonderbar radio, and fan and temp controls for the simple climate adjustment of the interior space. The passenger has a hold on bar in front of an inverted semicircular indent with CORVETTE branding and a shelf below. 2 recovered blue vinyl buckets sit in a sea of blue very nice carpeting which is protected by black rubber mats and a small white knob tipped Hurst shifter sits in the center within reach of the driver, and is housed within a machined aluminum small console that includes an ashtray. Drivetrain A 283ci V8, which is an era correct block but not the original, 3756519 casting number and F1859 casting date, (June 18th 1959), as this car was born in February 1959. This engine has been finished in the traditional orangish/red Chevrolet hue and is fed by a 4bbl carburetor. This healthy mill is connected to a non original Muncie M20 4-speed manual transmission which sends power back to a date-correct AE stamped 3.55 geared rear axle. The engine and bay show signs of patina and the aforementioned fender crack is now completely evident. Undercarriage Clearly a well cared for car with just a bit of surface rust on the untreated components but all else being strong steel and fiberglass. Independent coil spring suspension is on the front and leaf springs are on the rear with drum brakes adorning all 4 corners. Dual exhaust snakes its way rearward through the frame and ends in the chrome corners of the rear bumper. All looking good down here with a new fuel tank and sending unit. Drive-Ability This writer loves 2-seater cars and while Im drawn to the British sports cars I will never pass up the opportunity to drive a C1 Corvette. After wedging myself behind the fixed position rather large steering wheel a few pumps of the gas pedal, a twist of the key and the 283ci V8 roared to life. The car handled our test track swimmingly with wonderful acceleration, bias free panic braking, and good handling thanks in part to the upgraded nearly new Coker radial tires. A number of frowns crept up during my tenure behind the wheel. Those being: the heater blower not functioning, the radio not belting out any tunes, the tachometer, fuel and temperature gauges did not read, and the wipers, while operational, will not turn off on their own. One must open the hood and move the switch on top of the wiper motor back to the park position A now 23-year-old restoration, this car does not look it. With its dual headlights, and curvaceous rear, with bumper exhaust outlets, it will put out a healthy sound when started up, which does so very quickly with the turn of a key. Overall, a very good presentation, so much so that it rolls as one fully sorted curve carver thats virtually guaranteed to captivate and impress! VIN DECODE J59S104521 J-Corvette 59-1959 S-St. Louis, MO Assy Plant 104521-Sequential Unit Number (February 1959 Build) 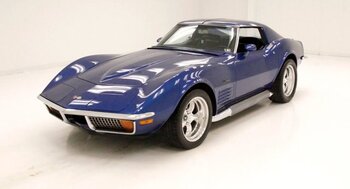 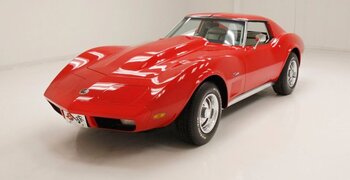