1957 Ford Thunderbird E-Code After unveiling the Chevrolet Corvette in 1953, Ford needed a response. That response was the first generation of Ford Thunderbirds. They were named "a personal car of destinction" but its Sports Car influence is very apparent. The T-Bird proved itself in the American market outselling the Corvette in 1955, 16155 to 674. It brought personal luxury cars to the masses and clearly left its mark on American history. Thunderbirds had many different looks throughout time with this first 3 year long generation being dubbed the Little Birds. Of all those generations the 57 is often a favorite as it received from subtle redesigns from the earlier two years with restyled drop center front bumpers, larger round taillights, more prominent fins and a slightly longer wheelbase. Taking it one step further is what is known as the E-Code Thunderbird. If you wanted the personal luxury car look combined with more horsepower than other small block V8s around in that time you went for the E-Code. Only 21,380 Thunderbirds were produced in 1957 with only 1,363 getting that E-Code Performance option. So what exactly is the E-Code? Well what many quote as the most desirable option available in Thunderbids refers to the larger 312 c.i. 270hp motor topped off with a pair of factory Holley 4 barrel carburetors. They also received a larger bore, longer stroke, higher compression ratio, and an automatic choke. The result is a motor that put out more horsepower than even the Corvettes were pulling at the time. It was 1 of four engine options offered in 57 and very few were ordered with it. The 57 you see here is one of those E-Birds and the car has undergone a beautiful complete frame off restoration resulting in one of the cleanest examples of these cars you are going to fine. The car has won a large number of best of awards along with 100 point concours awards and has been meticulously maintained since completion. It is painted in its factory Starmist Blue and the fit/finish is unmatched by many classics out there. The color combo suits this 50s classic perfectly. The chrome and stainless is in beautiful condition throughout and all of those original pieces are nicely mounted in place. The glass, the exterior lights, the emblems, you arent going to find any weak areas on it. It is a hardtop only car which is easily removed to completely change the look but there is some super classy about the side port holes in these vehicles design. The car rides on its original Kelsey-Hayes chrome wire wheels with wide White wall tires and if that wasnt enough Vintage 50s nostalgia for you it also has its original fender skirts in back. Not only does the car have that rare E-Code motor option but the engine compartment is gorgeous. Everything has that period correct look. Both it along with the rare original 3 speed manual transmission with OD were rebuilt during the restoration process. The only major modification that was done to the car was the 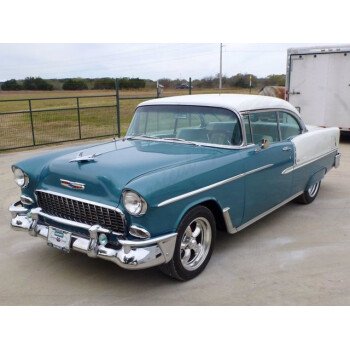 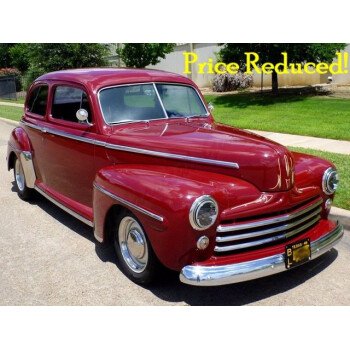 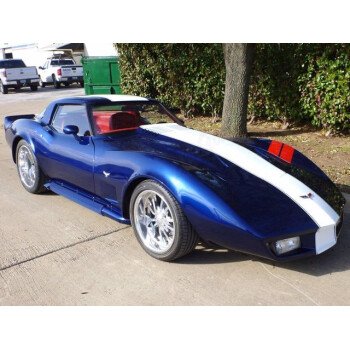 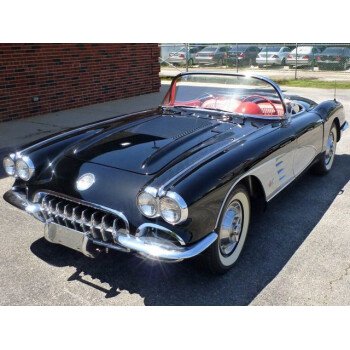