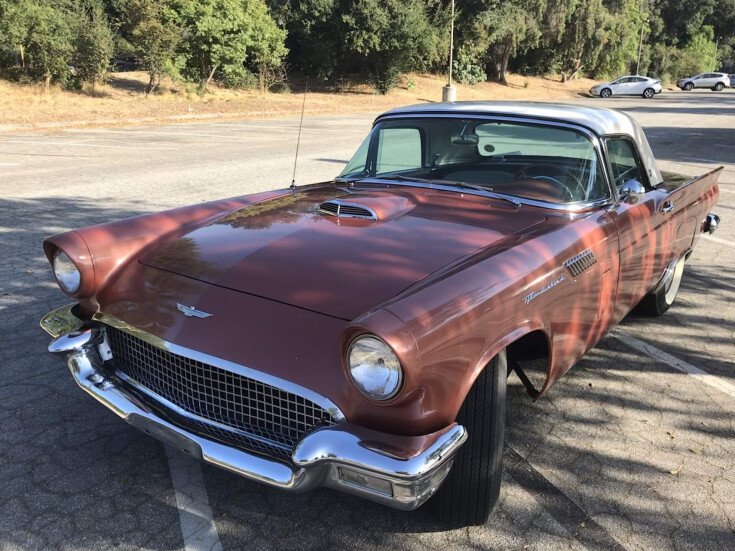 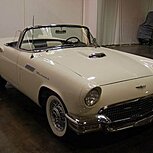 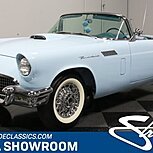 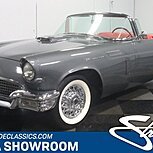 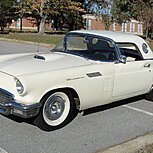 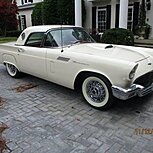 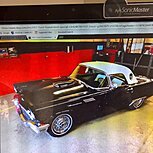 No solicitations please - I don't need any assistance selling.

For sale is a professionally restored (documented restoration) matching-numbers "D" code 1957 Ford Thunderbird convertible with original California black plate in Thunderbird Bronze paint with Colonial White Top and White Interior. This is a matching-everything car. The engine, transmission are the original ones from the factory with this car. The t-bird bronze color and white interior are as specified on the firewall plate QE = Thunderbird Bronze with Colonial White Top, and XK = White Interior. This is a private party sale with the California title immediately on hand and ready for transfer. Odometer is showing 92,840. Miles are original and has not turned. Not a single dent or ding on body and zero rust on body or frame. Stick your head underneath the car and you won't find any rust anywhere. The body is absolutely perfect. The chrome on the front and rear bumpers looks beautiful and shiny with no rust, dings/dents, or pitting. A Southern California original car from day one when it was first sold in the San Diego area. It has power windows, power brakes (front brakes had a documented conversion showing the parts/labor breakdown from drum to disc brakes during restoration to help with stopping, see below), and power steering. It has only had two owners and has been owned by the same family since 1959. It has been passed on from one generation to the next. It was built on October 20, 1956 in Dearborn, Michigan and shipped after being built to be sold at City Motors Ford in National City, CA in the San Diego area (later renamed Colonial Ford in the late 1960s). It has resided inside a garage with a car cover to protect its interior/exterior and bumper chrome throughout its life, being driven only occasionally in dry Southern California weather. The dealer it was sold to is documented in the original (not a photocopy) 1956 sales invoice showing the options breakdown which I will provide the new owner. Total sales price according to the invoice in 1956 for this t-bird was precisely $3,305.70 including dealer charges. All four tires are in good shape and do not show cracking or age fatigue. Both windshield wipers have been tested and work great. The blower/heater have been tested and work great.

This is a “D” code car that has a 312 CID V8 245 hp engine with Ford-O-Matic automatic 3-speed transmission. The engine and transmission are “matching numbers” and are the ones that came originally with the car and have never been swapped out. This t-bird is immediately ready for long distance trips and is a good driver. It starts right up every time as soon as the key is turned and is regularly driven to avoid problems. It was recently driven from the San Diego area to Los Angeles, 120 miles, without any problems. It comes with the rare porthole delete option in the hardtop (the porthole was a zero cost option when new) and has the T-bird insignia in its place, which matches the insignia on the steering wheel. Note that this is a hardtop only with no soft top, although it includes the original tonneau cover (with original slip case) to protect the interior during bad weather with the top off.

In 2012 it underwent a documented $11k+ professional restoration by Hilltop Classics in Escondido, CA. Due to the condition of the paint and body, a frame-off restoration was not needed and work during this light restoration was left to mechanical and interior work. There was an extensive amount of work that was done to get in running after it was sitting for a number of years, with a parts and labor list that is several pages long. The fuel system from the tank to the carburetor was rebuilt. The cooling system was rebuilt. The seats were re-upholstered including with new foam, and installed to factory original specs and colors. The interior dash padding was replaced during restore to factory original spec and color. The side door panels were replaced with original spec parts, the carpets were replaced to factory spec, etc. Too many things to list, but I have the paperwork showing what was done. There are two documented functional improvement modifications done to it during this restoration; the original front drum brakes were converted to disc brakes and the neutral safety switch was modified to allow for it to start more easily in the modern park "P" gear, instead of in neutral. Lap belts were also been added for safety. During the restoration a new exhaust was installed along with muffler and new rear tail pipes, a new fuel tank, new fuel pump, new radiator, new starter, and a large amount of other work done and parts replaced. Numerous bushing parts in the suspension were also installed. All of this work described previously is fully documented and readily available for review and split into parts/labor costs.

The chrome bumpers look wonderful and are very shiny and attractive with no rust or pitting anywhere. Note, although the body is immaculate and perfect, there are minor scratches and paint chips on different spots on the paint. It is not a perfect Pebble Beach concours car, but an original, rust-free, attractive looking, and solidly running driver car. Sellers of classics tell you all of their cars positives, but usually never a list of their known and obvious negatives; which I don't agree with because it is a waste of time for both sellers and buyers. There is no '57 T-bird in the world at this price point that is going to be perfect. It is not feasible for an original 63 year old car not to have paint chips, minor scratches, and other issues regardless of how well it has been taken care of or how much it has been sheltered; set your expectations accordingly.

All known cosmetic and functional issues:

2) All the original equipment has been tested and works with the exception of the original town & country radio and the clock.

3) The glove box - The keyhole has become recessed and fallen inside the box and needs to be pulled out. The glove box does not currently open due to this.

4) Both of the rear tires rub slightly against the insides of the rear fender skirt when sometimes turning. Practically speaking, the only time you can sense this is when the car makes a noise from the rear wheels when turning at low speed. I have not had this diagnosed, but I believe it is due to a wheel alignment issue.

5) The driver's side power window goes up and down perfectly, the passenger side is slower to go up and down but still does work and closes all the way properly on its own.

6) The passenger side door's rear edge sticks out about .5" from the rest of the body when closed. The door locks and unlocks correctly using the key, and the hinge opens and closes the door smoothly and normally, so mechanically the door seems to be fine. This car hasn't been in any accidents so I believe it's a door and/or hinge alignment issue. The car is weatherproof if exposed to water as there is no water that seeps in. It's up to the buyer to investigate and fix if they choose to.

7) Various exterior rubber weatherstrips around the door windows and hardtop will need to be replaced as they have deteriorated.

8) Nearly all 1955-1957 t-birds with original engines, with slim-to-none exceptions, either leak engine oil or will soon leak oil after a recent engine rebuild. This one is no exception. The problem is due to the rope material that was originally used to seal the rear main seal of the engine at the factory. Unfortunately even if newer, modern materials such as neoprene are used to put in a new seal at the cost of several thousand dollars (engine out and hood off job often times), the problem will reappear and oil will leak whether it is days, weeks, months, or years. Search for this issue on t-bird forums and you will hear repeated stories of owners replacing the rear seal on their cars 1-3 times and it continuing to leak shortly afterward. Honest restoration shops that are knowledgeable about these cars won't redo the seals by themselves because they know they can't guarantee the work. Long story short is they all do it, and unfortunately there's no way to prevent it on these old engines. The good news: the leak is very minor, at only a few drops of oil per month, but it's enough to point out to the buyer of this car or any other t-bird from this era. This is more of a "put a piece of cardboard under the car" leak, rather than a "put a container under it" leak problem. In fact, we just keep a piece of cardboard under the car. I am telling any potential buyers about this and other issues beforehand because I want to make certain that the new owner is happy with their purchase and to minimize the possibility of any surprises.

Disclaimer: This is a 63 year old used car that is sold solely AS-IS. It's an original car in very good shape overall, but is not perfect and can't be perfect due to its age. I have done my best to describe its positives and negatives to the best of my abilities in the above description, but I may have missed some things. It is up to any potential buyer to do an inspection of it, either by themselves or by having it looked at by a professional. I don't have any problem with a potential buyer taking it to a mechanic if need be to get checked out as long as it's a local shop.

It was just re-registered with the California DMV a week ago for 2021.  I have just lowered my asking price but will entertain reasonable, serious offers. Although I am serious about selling and hope to find a new owner for it soon I am not desperate or in a hurry to sell and can wait till the peak Summer season when demand is at its highest for these types of cars to get my asking price. I am more than happy to answer any questions from interested parties and show the car to serious buyers, but please no tire kickers.