1957 Ford Fairlane 500 Skyliner convertible DGC8357 VIN C7RW208357 This 1957 Ford Fairlane 500 Skyliner convertible was reportedly purchased by the previous owners uncle in the early 1960s, and it spent time in California prior to its acquisition by the previous owner in 2005. Refinished in white and orange over a two-tone interior some time prior to the previous owners acquisition. The car was originally finished in Inca Gold and Colonial White. The C-code 292ci V8 is equipped with a single carburetor and Thunderbird-branded valve covers. Power is sent to the rear wheels through a three-speed manual transmission and a 3.56:1 rear axle.. Equipment includes a power-retractable Hide-Away Hardtop that works great. fender-mounted side mirrors, air conditioning. I think itll work I think it just needs charging which we will do it when we get it serviced and safety checked. The power-retractable Hide-Away Hardtop was introduced in 1957 and was available for three model years. The cabin is trimmed in black and white vinyl with color-coordinated door panels. Lap belts are fitted for front and rear occupants. We just had it all serviced and safety checked and its ready to go except for looking to get the air charged. Andrew said it was really comfortable to drive and it just runs down the road just fine as the original stock radio that does not work. The heater works. This is not a show car, but it shows well. The carpets are a little weak and some of the trim could be better but overall I think youll enjoy this car a lot. After looking at the underside you can just tell nothing is ever been done with the Underside. We did not find any rust but there is a patch in the floor pan and I assume its a rust patch but I dont That for sure. Also, this Ford has power disc brakes on the front drums on the rear. Michelin all season white wall radial tires that look like new. This beautiful Ford convertible is ready for you to enjoy and I know you will. 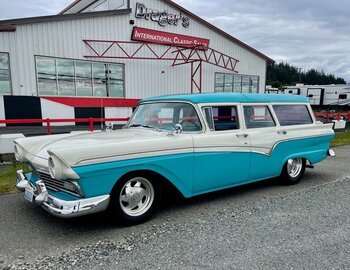 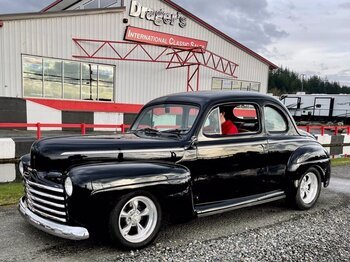 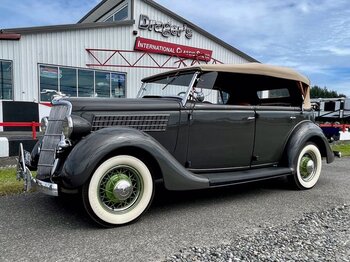 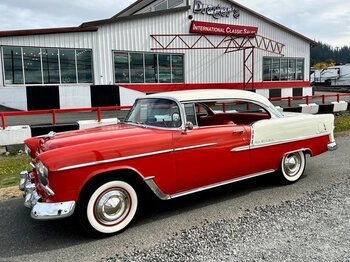