This 1957 Chrysler 300C is a beautifully restored example that is sure to turn many heads cruising down the road. 1957 was the third year for the Chrysler Letter Cars, and the 1957 iteration did not disappoint. In 1957, Chrysler produced only 1,918 2-door hardtops like this one. The 57 300C featured a re-styled yawning wide front grille that many saw as a more masculine look. The 1957 300C also saw the debut of the red, white and blue 300C round medallion on the side of the rear, and now much bigger, tail fins. Of course, the biggest highlight of Chryslers letter cars is that they were known to be some of the fastest and most powerful production cars available at the time. Powering this particular 300C is a 392 Cubic Inch Hemi V8, meaning that it has Chryslers famous hemispherical combustion chambers. The 392 Hemi is paired with a dual 4 barrel carburetor setup, that pushed out a whopping 375 horsepower back in 1957. Interestingly, the horsepower output on the 1957 300C was substantially higher than even the base-model 300s that returned to Chryslers lineup in 2005. The 392 V8 Hemi on this Mopar is mated to a 727 TorqueFlite 3-Speed Automatic Transmission that uses Chryslers famous pushbutton shifters that were prominent in the Mopar lineup back in the late 50s. This 57 Chrysler is well-optioned under the hood as well with Power Steering and Power Brakes. The exterior on this 1957 Mopar was re-finished in beautiful Gaugin Red exterior paint that shows exceptionally well. The chrome and brightwork on this Chrysler are also in very nice shape. The trunk and engine compartment have been meticulously detailed and both look great! This 1957 Chrysler 300C sits on 4 wide whitewall tires with factory wheel covers, along with a spare and jack in the trunk. The interior is in very nice shape as well. The Tan Leather front split bench seat looks great as well as the matching leather bench in the rear. Dash and steering wheel are in stock configuration and they do not appear to have been modified since new. An electric clock, fuel gauge, oil pressure gauge, temp gauge, amp gauge, and a 150 MPH speedometer make up the instrument cluster available to the driver. The interior is also loaded with options on this top-of-the-line Chrysler, including power seats and power windows. A dash mounted factory AM radio and rear-view mirror complete the interior look of this classic Mopar. Whether youre looking for your first classic Chrysler letter car or you have a garage full of them, weve got a stunning 1957 Chrysler 300C 2 door hardtop for you right here at Ellingson Motorcars in Rogers, Minnesota. Give us a call today! 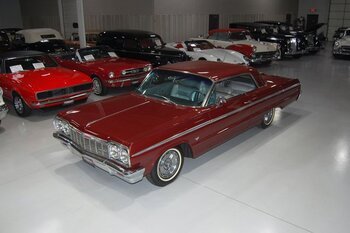 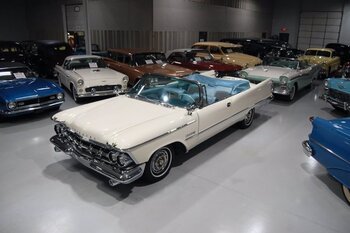 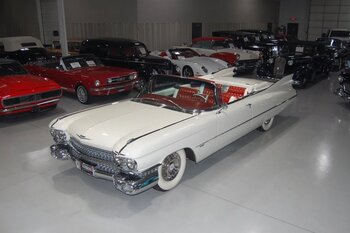 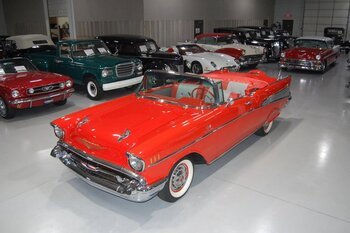