Patina trucks are hot right now. You know, those trucks that look like theyve been used hard and put away wet, but underneath are nicely finished and totally road-worthy, making them a kind of sleeper as well. This 1957 Chevrolet 3100 pickup nails the patina look, but packs a fresh small block V8, functional interior, lots of upgrades and tons of new parts. Nobodys going to confuse this for a show truck, but thats entirely the point. Artfully combining the parts from several different trucks, it definitely has that junkyard dog look that gets attention. But when you get closer, youll see that the sheetmetal is actually in pretty darned nice condition with none of the rust holes that youd expect on a truck with a used-up look. No, actually, someone spent a good amount of time putting it together, with good gaps and panel alignment that shows care instead of a disregard for quality, and thats the essence of the patina movement: used-up looks that disguise careful craftsmanship. Pinstripes dress it up a bit and you can tell that they were added after the body was assembled, since theyre consistent from panel to panel and the areas that look rusty have been cleared so they will always look like this and wont get any worse, no matter what you do with it. New glass, seals, lights/lenses all around including a pair of LED taillights, and a front bumper that looks to have been cut off with a torch all add to the look. And youll note that the gas tank was smartly relocated under the bed with all new lines. At the next car show, this truck will attract all the attention, much to the chagrin of the guys with bright, shiny, expensive restorations. The interior is simple but nicely done, starting with fresh upholstery on the original bench seat. Rubber floor mats stick to the original vibe and the door panels continue the junkyard dog theme. However, youll note there are new arm rests, all new door hardware, and more pinstripes on the dash, so you know they were careful about what they were doing. A tilt column with a fat three-spoke steering wheel means this Chevy was built to drive and there are brand new Auto Meter gauges in the dash, some of the few pieces that dont have patina all over them. Theres no radio, but a Lokar shifter manages a brand new TH400 3-speed automatic transmission, a nice upgrade over the original PowerGlide. And heavy-duty belts mean its safe to cruise, too. With just 1295 miles on the clock, the 355 cubic inch Chevy V8 under the hood is still very fresh and it runs like new. Theres an Edelbrock 4-barrel carburetor and aluminum intake manifold, valve covers that have been painted for the patina look, a fresh set of ceramic-coated headers, a new alternator, and wiring harness to make it all run. A big radiator with new lines ensures that this rough-looking pickup doesnt have rough-looking pickup problems and theres a new exhaust system with glasspack-style mufflers for an appropriate soundtrack. Theres a beefy TH400 automatic transmission and the entire front suspension was all rebuilt with new hardware throughout. The same is true of the rearend which received a new third member with new seals and bearings, and new shocks holding it up. The brake system was all replaced with a new master cylinder, new front discs and rear drums and all new lines. The very cool wheel package includes Vintage Torque Thrusts up front and truck-like steelies in back to complete the look and give it a wicked stance. We promise you wont be able to have more fun than with this truck. It drives beautifully but looks like it just lost a fight, and everyones going to love it. Call now! 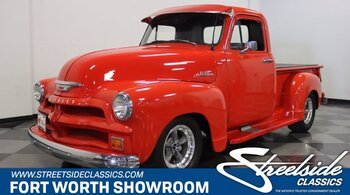 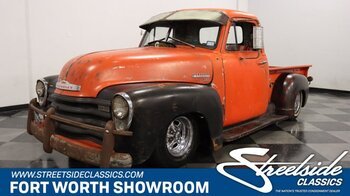 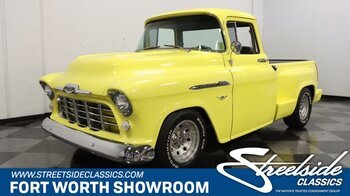 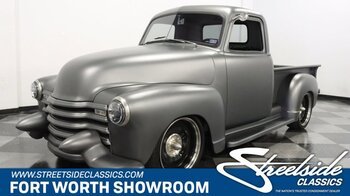