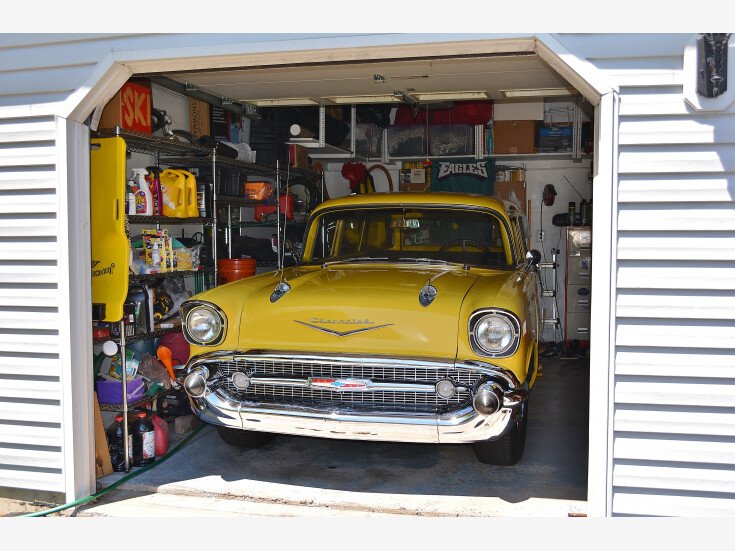 This vehicle is still for sale. If you are interested, please do not make an offer involving a trade. As indicated below, I am making garage space to start my first ever ground-up build/re-build. If you are interested in this car but unable to buy it until after you sell your own vehicle, please do not make an offer until you have sold your own vehicle.

Do not confuse this car with a Chevy Nomad. It happens all of the time because it is obviously a Tri-Five, 2-door, Chevy Wagon. However, it may now be as rare, if not more rare than a Nomad. Over the years, these cars were often used as parts cars; so much so, that enthusiasts believe there are likely less than 1,000 left, in this condition (or better), in the U.S.

This bright yellow wagon is a major head turner. I’ve never owned another vehicle that has received more double-takes, smiles, waves, finger points, thumbs-ups, shout-outs, comments, questions, etc... And, if you’re wondering why I’m selling, it’s only because the car is garage kept, but I have limited garage space and I’m ready to start a new project: my first ever, ground-up build/re-build.

All of the information provided in this sale is accurate, to the best of my knowledge. The information was provided to me by the two previous owners and/or I have figured it out through my own work on the car and research.

I purchased this car in December of 2015 from its previous owner, in Tennessee, who reportedly bought it about 3 years prior from BlueLine Classics, in Ohio. When I purchased the car, the odometer had 115,056 miles on it, but the car reportedly had only 15-16,000 miles since its prior restoration. Currently the odometer is at 116,079 miles, which means I have put just over 1,000 miles on the car, in the 5 years that I have owned it. It also means that the car has about 16-17,000 miles on it, since its restoration.

The engine is a small block Chevy 350 with a Holley carburetor and an Edelbrock intake, valve covers and air cleaner. The engine is believed to be from a 1978 Corvette L82. It starts very easily, but sometimes requires a choke on cold mornings. It has a great, classic V8 sound, idles evenly and runs very well. It is mated to a Saginaw 4-speed manual transmission. Gear changes are made via a Hurst Indie T Shifter, mounted on the floor. Transmission shifts are smooth and the feel of the “pistol gripped” Hurst T Shift handle is fantastic. The clutch has a long throw but that is expected of an older vehicle.

The body of the car is solid and the chrome is beautiful. In fact, the overall look of the chrome and trim may be the thing I receive the most comments about. The striking yellow paint job was reportedly done before BlueLine Classics possessed the car. Regardless, it still has a gorgeous shine, with a few minor imperfections. I believe the original color of this car was Chevy’s Cascade Green. I base this on the color I can see on the rear engine bay wall, where some black paint (from the restoration) has chipped off. I also base it on the color of the seats that I can see under the seat coverings that were added during restoration.

The interior of the car is clean and attractive. Apparently, at one point, this car had many stickers on it. There is still a “Woody’s Surf Shop” sticker on the dash. I did not remove it because I didn’t want to risk damaging the dash paint and, I actually liked the sticker. It’s fitting to the car. The car’s brilliant yellow paint job extends into the interior of the car and is made to stand out with a black dash, seat coverings, carpeting, paneling and headliner. All lights, blinkers, horn, electric wipers, heater, etc. work as they should. However, the right turn signal does not shut off on its own, after a right turn. It has to be manually turned off. A SUN Super Tach II and 3 gauge cluster was added by a previous owner and all seem to work well and be accurate. Also, a previous owner had adjustable front air shocks on the car. The controller for the air shocks is still in the car (below the dash and left of the steering column) but the shocks are no longer electronically adjustable. Additionally, the car has is a 4-speaker stereo system with Pioneer speakers and a Kenwood 400 watt amplifier.

1. A new wiring harness (from dashboard forward) was professionally installed 1.5 years ago because many of the wire coverings were dry, brittle and/or blistered. At that time, a brand new Napa Legend battery was also installed.

2. When I first purchased the car, the steering didn’t seem to track consistently. So, the front end was disassembled. Parts were cleaned and inspected and replaced as needed. Replaced parts include the ball joints, upper control shaft bushings, lower control arm bushings, and a new center link kit was installed. In addition, all 4 tires were re-balanced and the alignment was professionally redone. The car tracks well now.

3. Also, when I first purchased the car, it had 2 slow oil leaks; one at the top rear of the engine and the other from the lower rear of the engine. The intake manifold gaskets were replaced and that seems to have stopped the top rear leak. However, there is still a slow leak from the bottom rear of the engine. I believe the rear engine seal may need to be replaced but I have not found the time (or space) to drop the tranny, to replace it. Please know that it is a very slow leak and I have only had to replace about 1 total quart of oil in the car, in the past 2 years.

4. The previous owner provided the Custom Autosound Concours Series USA-230 radio which fit the pre-existing radio opening perfectly. So, no new holes had to be cut into the dash. However, the radio was only connected to one ‘no-name’ speaker which was just sitting on the floor, under the front seat bench. I installed new kick panels with Pioneer kicker speakers and also added 2 Pioneer 3-way speakers to the rear of the car. The rear speakers are held still by Velcro because I refused to drill/cut any holes into this beauty. I also added a 400-watt Kenwood Amplifier, which is mounted behind the dash, right of the glove box.

5. The passenger side lower windshield had a fog spot within the glass but I was able to greatly reduce the fog spot with heat treatments.

6. Regular maintenance was also completed: including a flush and refill of the cooling system, a siphoning of old transmission fluid and replaced with new fluid, and replacing of oil and filter.

There are 3 notable blemishes on the car, which I included in the pictures. There is a ding in the rear bumper but it is covered by the license plate, when the plate is mounted. There is a small area of flaked off chrome on the passenger side front bumper, about the size of my thumb nail. Lastly, some of the black paint is flaked off of the dash, to the right and above of the speedometer.

A car cover, with cable will be included with the car. However, the buyer will need to purchase their own lock for the cable.

Payment can be made via a direct Bank-to-Bank transfer, a cashier’s check or a money order. However, please know that the car will not be released to the buyer, or a transportation company until payment is confirmed and cleared.

Thank you and please contact me with any questions.