1955 Chevrolet 210 Sedan A gasser is a type of hot rod originating on the dragstrips of the United States in the late 1950s and continued until the early 1970s. In the days before Pro Stock, the A/Gas cars were the fastest stock-appearing racers around. Gassers are based on closed body production models from the 1930s to mid-1960s, which have been stripped of extraneous weight and jacked up using a beam axle or tubular axle to provide better weight distribution on acceleration (beam axles are also lighter than an independent front suspension), though a raised stock front suspension is common as well. Roll up your sleeves, strap on your helmet, and climb into the white pleated leather drivers bucket...its time to get hopped up and enter the world of the gasser in 1955 Chevrolet 210 sedan form. This wild looker and cooker is beautifully done, powered by a monstrous big block V8 and runs like, well a gasser! A true throwback to the drags of yore, I can see my crew girl in her tight pants, tied bottom button-down shirt, big hairdo and chewing a wad of gum stating Oi loike da drahhgs, especially in Jehrsee, gimme another cigharhette... Exterior The 55 look of the 210 has been demoted with the removal of almost all brightwork, now presenting as a 150 series car, (no trim around the windows, just plain black seals and sans side trim), which has been carefully maintained with the only differences being the jacked suspension, carburetors, bird ingesting hood scoop and faux front mounted fuel tank. This car is bathed in a chocolate brown with ghost flames licking back from the front of this skate for the lower body and highlighting the black painted roof is red tinted side glass to complete the nostalgic gasser look. Up front and on back around the Chevrolet cloisonn badges remain and a stainless tank typical of the gasser genre is fronting the chromed egg crate grille Ferrari-esque grille. Within the front wheel wells are snarling stainless steel header pipes which form into a single cut out exhaust pipe that when the engine is fired up will absolutely rack off or can be kept closed and only announce your presence a few blocks away. 15-inch chrome Cragar wheels are on the front and in the back, we note American Racing Torque Thrust wheels with sticky 315/60R15 tires. Interior Lurking behind the red tinted glass, a white pleated leather panel is screwed to the doors and house the shiny handles and knobs and a black armrest pull. Slipping inside super clean white pleated leather with white piping is draping front buckets and a large rear bench. A Hurst shifter is seen between the buckets and well within the drivers reach. The black steel painted dash retains its iconic dual fan design, the drivers side housing the gauge cluster, and passenger side the Cherolet badged speaker fan. Mini bowties stamped onto the central trim strip now houses 4 chrome bezel gauges for monitoring engine vitals and upon the dash top is mounted an aftermarket tachometer staring at the pilot. Below the dash are a pair of toggles for the electric fuel pump and electric cooling fan. A pleated white leather headliner hangs tightly above, and below is a sea of black nice carpeting. Gotta luv the chrome roll bar highlighting the interior and giving the driver some extra protection in case things end up turtle. A shout out to the trunk with the integrally mounted fuel cell and battery relocation. Drivetrain Get ready to get some meat and potatoes thrown at you! The mill is a consignor-stated 427ci big block Chevrolet V8 featuring a Weiand supercharger with tons of polished and natural finish aluminum for the accessories bolted to the black painted block. On top are a pair of Holley 4bbl carburetors to feed copious amounts of air and fuel into the killer big block. On the back is a Muncie M20 4-speed manual transmission with a blow-proof bellhousing and a Centerforce clutch. The rear axle is a Dana 60 with an aluminum differential cover. All clean and all meaning business here. Undercarriage Fully restored, nice and black with no rust seen for miles. The original frame has been retained up to the firewall area where a new stub section has been installed to accommodate the front suspension in leaf springs form along with the tubular straight axle, and on we note a ladder bar and coil over arrangement. Wilwood disc brakes are on all 4 corners. The stainless headers mentioned earlier snake their way down from the engine bay and can either be left uncorked for all the world to hear or be closed up sending spent fossils and oxygen rearward through a pair of race mufflers. A nice undercarriage custom structural creation. Drive-Ability Our resident racer took this beast out and came back with a smile on his face. The only disappointment in the drive-ability was the tarmac was too littered with gravel to gain the traction to lift the front end. As for the mechanicals a few frowns reared their heads...the horn not tooting, the wipers not wiping and the brake lights not illuminating caused a few concerns but otherwise, he reported it was great! What a gas(er) to have experienced and in our showroom. A classic leftover from the early drags of yore, prior to the Pro Stock class. A way to get Wallys, all jacked up, loads of power, gobs of noise, wonderful 2 tone paint and wispy ghost flames, and a full-on trim delete on a mostly original bodied car. I have a hankering for going in a straight line right now! VIN DECODE VB55K009794 V-V8 B-2100 Series 210 55-1955 K-Kansas City, MO Assy Plant 009794-Sequential Unit Number 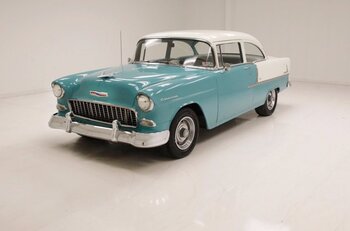 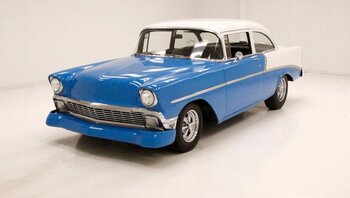 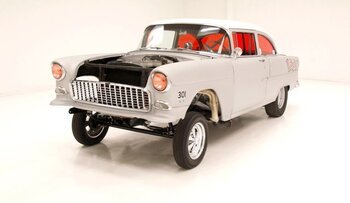