After WWII Packard’s Chief George Christopher promised both his dealers and consumers that production would see a huge increase and the all new post war Packards would be newly designed from the tires on up. Unfortunately Mr. Christopher wasn’t able to keep his promises and the new Packard for the 1948 model year was new looking, but really only skin deep. Head designer at Briggs body company Al Prance took the prewar Clipper design and reworked it trying not to save as many of the old panels as possible, but when he was done the car was completely changed in appearance and the all new “Bathtub” design was created. Mechanically Packards trusty flathead straight eight engines were still used in its super 8 and custom eight models and the chassis design stayed largely the same as its postwar predecessors. By 1950 Packard was ready for another re-design, but even with the 3 year run of this “Bathtub design,” very few Super and Custom Eights were produced in convertible form and they are a rare sight today indeed. The 1950 model year was truly the best iteration because all of the bugs were worked out by this time and the long wheelbase of the Custom eight was standard on both the Super Eight, Super Eight Deluxe and Custom Eight cars and a wide variety of quality accessories were available as well. These “Bathtub” Packards have really aged well and have come into their own today and have quality and looks that really surpass the normal Ford or GM products that are so much more common today. Also worth noting that the character of Doc Brown in the 1985 film “Back to the Future” drove a yellow 1948 22nd series convertible which makes these even more identifiable with many today.

Offered here is an awesome example of a 1950 23rd series Packard Super Eight Deluxe convertible that has been under the same ownership since 1960 in Indiana. What is really appealing about this particular car is that it is a very beautiful and rare color combination of Turquoise blue with read leather interior and it is also loaded with factory options and accessories including; a rare folding rear windshield, period original chrome wire wheels with cloisonné emblems on the hubcaps, power seats, power windows, power top, Packard compass, dual Packard script windshield spotlights, postwar Trippe driving lights and even Packard authorized curb feelers! Its just super cool and as a convertible with the raked back “vee” windshield this car has just got the look that you want. Upon our recent acquisition of the car we gave it a complete service with all new brakes, new whitewall tires, rebuilt carburetor, new gas tank, new hydraulic lifters, new power top and window pump and new top pistons. It runs and drives incredibly well and presents beautifully. The cosmetic condition is stellar with beautiful paint and all new old stock chrome that was collected and installed by its previous owner. Its a beautiful car that would make a great addition to a collection or to show and drive. Contact us for more information. 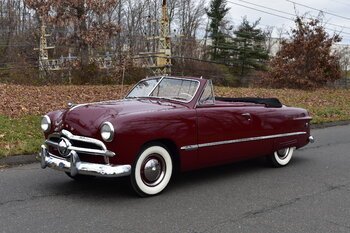 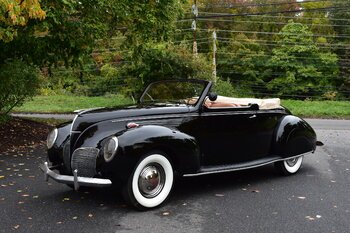 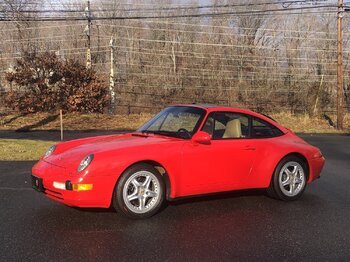 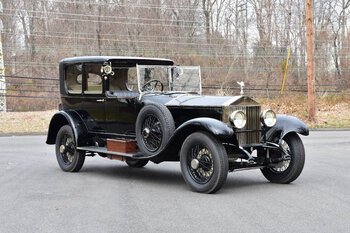