In the early 1950s station wagons enjoyed a dramatic uptick in popularity with American buyers especially as people moved from cities and out into the suburbs. The success of the Chrysler Town & Country had shifted the wood bodied car upmarket and soon after the war virtually every manufacturer in the US had a stylish well-equipped Woody in their line. Not one to be left behind Packard added a handsome woody wagon which they called the Station Sedan. Based on a comprehensively equipped Packard Eight Sedan it had an extended roof wood window frames and side panels and ash framed tail gate with contrasting panels and a lovely mahogany-floored luggage compartment with bright metal rub strips.The driveline of the Standard and Deluxe Eights was Packards famed smooth quiet and reliable 288 cubic-inch L-head inline eight-cylinder engine. With its 2-barrel carburetor it delivered a healthy 135 horsepower through a column shifted 3-speed transmission. In contrast to lesser station wagons the Packard Station Sedan was not utilitarian: It was a luxury automobile designed and built for a successful family who demanded comfort performance quality and distinction.Among wood-bodied cars of the early Fifties the Station Sedan stands out thanks to its distinct styling and recognizable Packard lineage. Produced for only two model years 1949-1950 it is believed that only 3864 were built. Most Station Sedans were 1949 models making this 1950 example particularly rare. Not unusually for 1950 Packards it has a 1949-style grille and parking lights as Packard used up its stock of existing trim parts before introducing new body designs in 1951.As the subject of an extensive nut-and-bolt restoration completed in 2006 this 1950 Station Sedan is a beautiful example of this rare woody. Restored at a documented cost of nearly $170000 it is finished in its original color of Arizona Beige with light ash wood side framing contrasting panels and highly attractive brightwork. The paint finish is consistently good as is the glossy varnish on the wood panels. There are a few instances of cracked lacquer and a minor paint imperfection or two but overall the cosmetic quality reflects both the restorations quality and the quality of care it has had during limited use.Befitting an expensive luxury automobile it is well-equipped for the period with chrome bumper overriders front and rear grille guard rear wheel skirts amber Packard-badged fog lights cormorant mascot and a backup light. The wheels are body color with large Deluxe-style hubcaps and trim rings and wide whitewall bias ply tires.The interior is trimmed in dark tan leatherette with oatmeal cloth seat inserts that match the oatmeal square weave carpeting and features all youd need for a family road trip with plush and roomy bench seats front and rear a heater/defroster pushbutton radio and lovely woodgrained metal dashboard with bright gauges. The fittings and controls including the steering wheel chrome details and buttons are in excellent order.Packards venerable L-head inline-eight sits in a tidy compartment which has been thoroughly restored in period colors and materials including hose clamps and decals. The engine bay and chassis display light signs of use as the car has been enjoyed in shows and the occasional tour while in the care of its most recent owners who have maintained it from completion of the restoration in 2006 to 2021.This charming and rare 1950 Packard Eight Station Sedan will undoubtedly make a statement at any gathering of Packards or classic woody wagons and is sure to please the devoted marque enthusiast. Offers welcome and trades considered For additional details please view this listing directly on our website https://hymanltd.com/vehicles/6981-1950-packard-eight-station-sedan/ 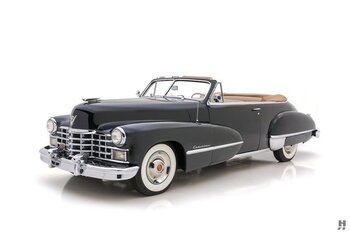 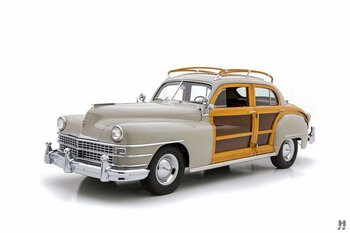 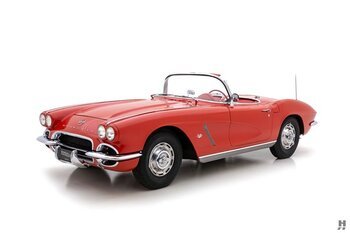 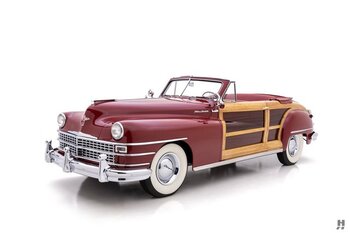