1948 Ford Sedan Custom The 40s was an interesting time for Ford and all car manufacturers for that matter. With WWII underway there was a lot of unpredictability in the industry and resources were being put towards the war effort. What this meant for vehicles was a somewhat freezing of time where production was put on hold and designs didnt change. However with the arrival of 1946 production had started to pick back up and although very similar to their 1942 ancestors the horizontal grills were introduced as well as some other slight changes. The 1948 was the very last year for this body style as the designs would later drastically change into the shoebox style that would rule the 50s. The 48 you see here is a very solid car that is in excellent condition. It has a lot of modern features incorporated into the classic look and was built to be reliable. It is the type of car that just feels solid. We talk about this on a lot of cars but it is really tough to put into words. You car guys know what we mean though. The doors shut right, the ride feels good. It is just one of those cars that feels like you could hop in it and go anywhere. In fact, with a shop full of cars we are no strangers to trickle chargers, dying batteries and that sinking feeling when you turn the ignition and an old classic doesnt roar to life. This car was sitting in line to get photographed and after a few weeks of not moving with no charger it started up as if it was just parked and ready for its daily drive around the block. It really is in nice shape throughout and we really feel it is being listed for a very reasonable price. The body on the car is very solid with no evidence of previous rust, patches or any body filler. It is very straight and painted in a nice Burgundy Red. Beige and Red pinstriping accents the nose and deck lid giving just the right touch of custom to the mostly stock exterior. All of the original style stainless is cleanly mounted throughout with no pitting or issues. The only other custom features you may note when walking around it is modern LED Trucklite headlights and LED tail lights have been added but are in the original bezels and the deck lid has also been shaved. These are all very subtle features the combine perfectly with the original styling. The car sits slightly lower than stock and looks great with its original style steel wheels with baby moon hubcaps. We get it, Chevy vs Ford has always been a thing and will continue to be a topic of controversy. Often times when talking about the motor we are prepared to hear from two camps. The purist who hate anything other than matching drivetrain to the manufacturer and then those who prefer modern performance over any brand loyalty. Well no matter who you are it is going to be tough to critique this aspect of the car. The drivetrain has been modernized with performance in mind but has stayed true to being a Ford. It is now powered by a drivetrain that you would expect to find in a Mustang and 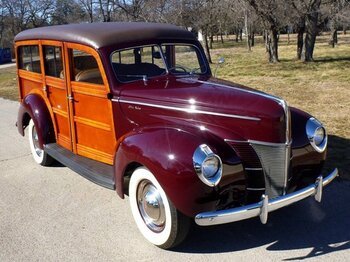 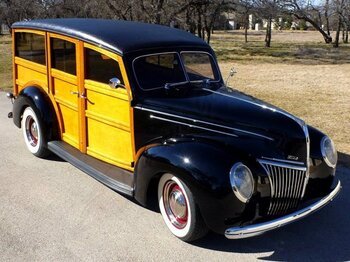 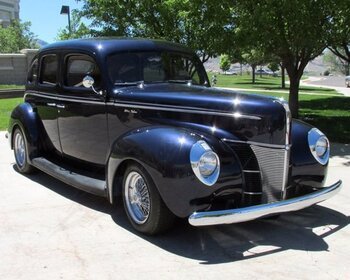 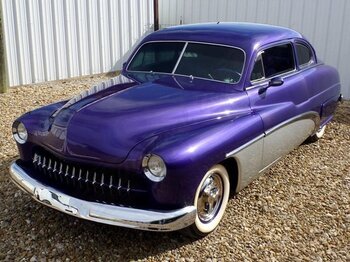