With the world still reeling in the aftermath of World War II Rolls-Royce and Bentley dusted off and set to work returning to the business of making motorcars. Automobile production stopped in 1940 while the aero engine division sustained the company throughout the war. As much of the workforce and machinery relocated to the aero division in Crewe management decided to move car production from the traditional home in Derby to the factory in Crewe. The move allowed for higher production volume and a greater quantity of precision machined parts to aid in standardizing the line; which Rolls-Royce saw as a necessary step toward long-term survival of the marque. The first product to roll out of the new works was the Bentley Mark VI introduced in 1946.This new model marked a significant milestone in the history of both of these great British marques. The Bentley Mark VI (joined by the Rolls Royce Silver Dawn in 1949) was the companys first postwar production car and the very first model offered with a complete all-steel production body known rather unglamorously as the Standard Steel Saloon. Pressed Steel Ltd produced the panels and the cars were assembled at the newly integrated Rolls-Royce works in Crewe. Mechanically it was similar to the aborted pre-war Mark V with independent front suspension on a sturdy chassis and a 4.25 liter inline six. The Standard Steel Saloon offered traditional styling and classic wood and leather interior appointments. It was attractive understated and elegant yet hardly groundbreaking or advanced. That did not stop the independent coachbuilders like James Young Hooper and H.J. Mulliner from producing their own more contemporary designs for the chassis. Concurrently American styling trends also began to influence the Brits materializing in a series of slab-sided experimental designs in the late 1940s.One of the most distinct new-world designs to feature on a Mark VI chassis was James Youngs style number C10M as seen here on our featured car chassis number B495CD. With its fully enveloped wings clean lines and slim pillars this design no. C10M was dramatically different than the staunchly traditional Standard Saloon causing quite a stir when it debuted on the James Young stand at the 1948 Earls Court Motor Show. B495CD is the very car that appeared at that show and it is a fascinating example of the forward-thinking approach independent coachbuilders could take. At the time design C10M was quite polarizing; however it found enough favor to see three similar examples built.Historical records and build sheets supplied by the RREC show that B495CD was produced to order for Mr. Ronald Strauss of Strauss Turnbull & Co. The chassis left the works in June 1948 and shipped to James Young to receive its coachwork. Following the exhibition at the London Motor Show at Earls Court in late October final delivery came in December 1948. In 1953 Mr. Strauss traded the car via Jack Barclay Ltd. who in turn sold it to Mrs. Caroline Blackmore. It appears she ran the car for approximately two years before selling it via Barclay to the legendary British racing driver and car dealer Duncan Hamilton. He then sold the car to Thomas Whittle & Sons Ltd a well-known manufacturer of automotive belts located in Warrington. Copies of the chassis records and sales records from Barclays are included in the extensive file. The British registration book documents all subsequent home-market owners.In the 1980s B495CD received a full restoration and saw regular enjoyment on the road before being stored on behalf of the owner understood to be The Hon. David Keightley Rideal Oliver. In 2003 it was sold by Oliver and shipped to the Netherlands where it received an extensive mechanical freshening. Service records from England and the Netherlands go as far as 2013 when the car made its way to America where it was displayed in a private collection until recently.Today this fascinating Bentley presents in good order with a light patina from age and gentle use. The two-tone blue and silver livery suits the car well giving it an understated appeal. Full wheel covers originally polished are now painted to match the body and hidden beneath fill spats in the rear. The paint is generally good with some minor imperfections noted under scrutiny. Nice original touches remain such as the Lucas driving lamp original Bentley B70 headlamps flush-mounted trafficators and unique bumper overriders.The four-place cabin is in excellent condition; the blue leather seats showing well with light creasing in the otherwise supple Connolly hides. Blue Wilton carpets are in good order and the extensive wood trim of the dash door caps and picnic trays was beautifully restored while in the care of the previous owner. Fine details include front wind wings that open via cranks a complete set of hand tools in a sliding under-dash drawer pivoting rear quarter lights and a retractable rear sunshade. Rear passengers enjoy picnic trays and individual compartments each containing a bar set consisting of two crystal shot glasses and a leather-bound whisky flask (or whiskey depending on your drink of choice).Retaining its original numbers-matching engine paired with a four-speed manual gearbox this Mk VI delivers the relaxed capable performance expected from a Bentley of the period. With its recent history in an extensive collection it may require additional attention before embarking on road tours and events. Built before 1949 this car is recognized by the CCCA as a Full Classic and therefore eligible for their CARavan tours and other events. It is accompanied by a complete set of hand tools as well as road tools original handbook registration booklet and extensive documentation including a report by Bentley historian Diane Brandon. B495CD is a rarely seen example of James Youngs New Look design language and is an excellent example of the creative spirit of one of Britains greatest coachbuilders.For additional details please view this listing directly on our website https://hymanltd.com/vehicles/6400-1948-bentley-mark-vi-james-young-coupe/ 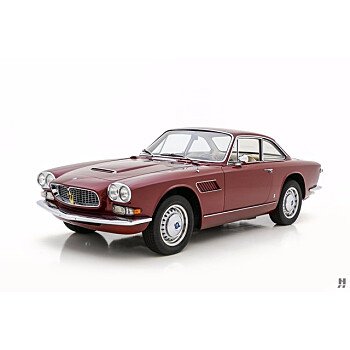