1946 Ford Super Deluxe The pent-up market created an unprecedented demand for new cars. Fords advertising agency, J. Walter Thompson, created a brilliant teaser campaign: Theres a Ford in your future. Until July, it showed only parts of the new Ford in a crystal ball; then there was a publicity blitz culminating in V-8 Day on October 26, 1945. More than a million Americans flocked into showrooms for the public introduction, and nearly half a million promptly placed their orders. For consignment, a really nice example of the 1946 version of the Super Deluxe, in rodded form. Post war production was very erratic with numerous prewar parts being used on cars after the war ended, and production began to ramp up, however there could be many iterations between some year model cars due to usage of various parts. This car has some of those, and many beautiful features, including a 350ci V8, a 3-speed automatic and an upgraded custom interior. 1946 never looked so super deluxe! Exterior Bathed in red all panels are laser straight, and gaps show great, in well minded steel form. They are covered in red paint, that is nice and deep, with no inclusions, no faults, and little imperfections. Outside trim was nearly identical to the 1942 except for the new horizontal grille consisting of three stainless steel bars below a massive, chrome-plated pair of Ford wings. The grille sported red striping within ridges in the metal. The deck lid, meanwhile, carried two horizontal strips of stainless below the license plate, and color selections were greatly improved over those of 1941-1942. Bumpers and badging are in excellent condition. Spears of chrome are running from bow to stern at the belt line just for a little extra bling. A spear is also in each fender as a highlighter as well as on each rocker at the bottom. Black wall tires wrap FORD logo capped cast 5 spoke wheels. A side view says it all where here you can view its sexy lines which curve nicely throughout this design. Interior 2 gray broadcloth insert with tuck and roll buckets which have red smooth vinyl bolsters are in front of a rear bench delete which is now a speaker housing box. A small black shifter console is in the center and this all floats in a sea of red carpeting. A tilt column rally steering wheel fronts the original and restored chrome dash in art deco style. This includes a lot of chrome bezels and vertical ribs, and a lineup of square gauges in front of the rally steering wheel. To the drivers right is a large round speedometer now blackface with red numbers. In the center vertical chromed ribs are on top of a new AM/FM/CD player stereo system. Continuing with the art deco styling is a large round clock in front of the passenger with more chromed attachments all in a background of painted red steel. To drivers left, there is an aftermarket trio of gauges hanging below the dash. A nice tight off-white headliner is above, and in that aforementioned box behind the buckets is an access door for more storage. Drivetrain A lift of the protuberant round hood we now see a 350ci V8 residing within its confines. This mill has a 4-barrel carburetor feeding it, and a TH350 3-speed automatic transmission on back. A 10-bolt rear axle spins the tires. Undercarriage With plenty of black rattle can paint which covers some minor surface rust underneath, and solid black frame, we tend to believe that this car is structurally solid, and presents no problems, at least with this evaluation on our lift. A slightly rusted exhaust system is seen as well as solid rockers and supports. Glasspack style exhaust is in and it works in unison with independent coil sprung front and 4 link with coil springs on back. Power disc brakes are now upfront, and power drums on the back. Noted this is a 1978 C body chassis from a Monte Carlo Drive-Ability This car fired right up and handled the test track with ease. The only problem experienced was the wipers not working. All else worked swimmingly. power steering and power brakes makes it a pleasant easy driver. Turn the key and go in style of the Super Deluxe from Ford in 1946. The work has been done, all you need to do is drive up Main Street and turn heads or go win some trophies! 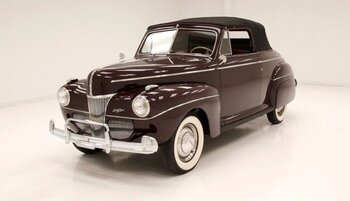 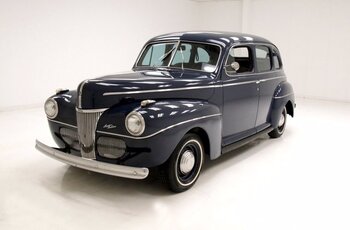 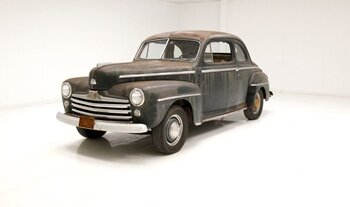 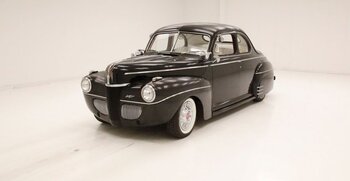