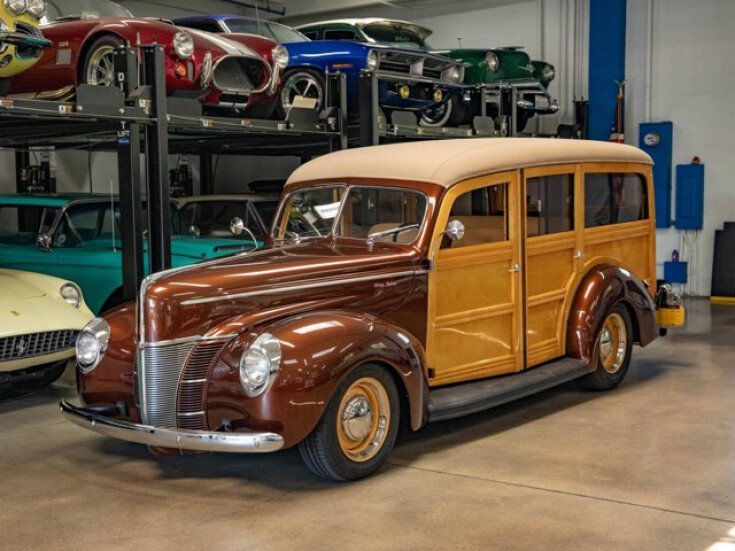 West Coast Classics are proud to present an absolutely exceptional and beautiful example of this no expense spared and stylishly customized all American classic Woody hot rod wagon - a 1940 Ford Deluxe Woody Station Wagon, customized, crafted and built by the late, and an absolute legend in the southern California Woody community, Doug Carr of the renown Wood N Carr shop of Signal Hill, CA shop, and reportedly one of his very last, if not the last, Woodys built. With only some 335 miles on the build the wagon boasts all new wood, a fuel injected crate 302 Ford racing engine matched to an Art Carr 4 speed automatic performance transmission, Vintage AC & Heat, Power windows, Power steering, Power electric brakes, all new suspension, soundproofing, Walker radiator, all new smoked glass windows & windshield, all new 12V wiring system and stunning paint in its original factory color and an all new custom leather interior!The build was finished in 2019, and completed at the renown Doug Carrs shop in Orange County,CA with with all new wood crafted reportedly at over $100k invested in wood alone!The first woodies were manufactured in the early 1900s by local coach makers. As was customary for all coach builders they bought chassis without bodies and then constructed and crafted the bodies out of wood themselves. The coach makers would then sell these bespoke creations to local business owners who would use them to transport guests to and from the train stations and local resorts and attractions and later airports. These wagons were multi-seat transporters, with room for up to 8 passengers plus luggage and this early usage led to the vehicles being known first as depot hacks, referring to the depots and the old horse-drawn carriage nickname of hack.The woody continued to grow in popularity, until finally in 1929, Ford released its own version of it. Ford marketed the cars as all-purpose utilitarian vehicles with a low initial cost, as wood-bodied cars were at that time less expensive to build than steel-bodied cars. Through 1939, Fords station wagon bodies were assembled by Murray Corporation of America, from wood grown in Henry Fords very own northern Michigan forests. That year, however, relations between Ford Motor Company and Murray soured. This led Ford to consider in-house production of the station wagons. Discussions with the management of the Iron Mountain operation, then providing the wood parts to Murray for assembly, resulted in a proposal for all body assembly to be done in the northern Michigan locale and the bodies would then be sent to assembly plants fully finished and trimmed. The change took place at the beginning of the 1940 model year.The bodies then took on a much different appearance. The roofline was subtly altered, becoming more rounded at the windshield header. Panel spacing was changed, such that the lower panel became narrower, and the rear quarter panels were consolidated into one piece. The rear doors, formerly hinged at the back, suicide style, now swung toward the front. The spare tire, housed inside in 1938 and 39, on the back of the drivers seat, was returned to the tailgate, where it had been located from 1935 to 1937. Deluxe wagons were given the option of maple or birch framing, while Standards came in maple only. Darker-colored gumwood began to be used for panels, in addition to birch, in both series. The choice of material was random. Bodies were given three coats of varnish, hand-sanded between each application. Three engines were available: the popular 221 cubic inch 85 hp V-8, the small 136 cubic inch 60 hp V-8 (installed in just two Standard wagons), and the larger 239 cubic inch 95 hp V-8 from the new Mercury, which was fitted to 354 Deluxe station wagons.The model year 1940 came with a number of changes to Fords station wagons, which, just two years prior, had their internal classification shifted from commercial vehicles to passenger cars. Riding on a carry-over 112-inch wheelbase, their wood-intensive bodies, no longer built by the Murray Corporation of America, were now assembled in-house by Fords Iron Mountain plant. These wagons sported a flatter roofline and two-piece tailgate, and each car incorporated 445 board-feet of lumber, primarily maple or birch for framing, mahogany for panels, and basswood for the roof slats. The fact that they were largely hand-built explained their extraordinary $947 cost, the highest in the Ford line at the time and the cost explained why no more than 8,730 DeLuxe Station Wagons were built for 1940, despite Fords total domestic production of nearly 600,000 automobiles!By the late 1940s, it became apparent to auto manufacturers that the woodies were becoming too increasingly expensive to produce and although still very popular in appearance, they were no longer a viable option for most buyers combined with the inconvenience and high cost of cleaning and maintaining the wood, so the manufacturers started making wood-paneling instead as an option for their higher-end models, another reason why today these rare all original woody wagons are arguably Fords finest and most desirable model for 1940: the DeLuxe Station Wagon.This particular Deluxe woody wagon was restored and customized with no expense spared by one of the foremost woody experts and craftsman in the country and is a phenomenally well built custom which still holds true to its roots and which obviously sounds and drives absolutely magnificently - see the video on our You Tube Page on our website for visuals. The floors are all new metal and rock-solid, with no signs of any repairs ever performed. All of the sheet metal is original, rust-free and very straight.In summary this must be one of the finest examples anywhere of a fully operational and turn-key ready tastefully modern and customized 1940 Ford Deluxe Custom Woody Wagon which still has a classic original look as well as all the modern day custom upgrades and technical advances with a terrific stance; a wonderful example of an all American 1940s hot rod woody wagon! 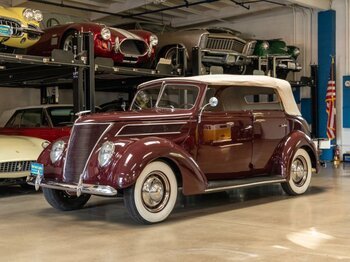 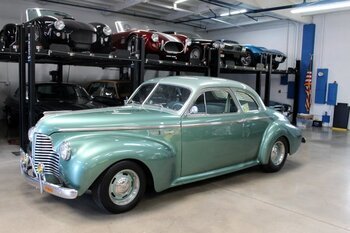 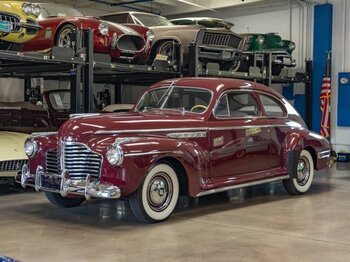 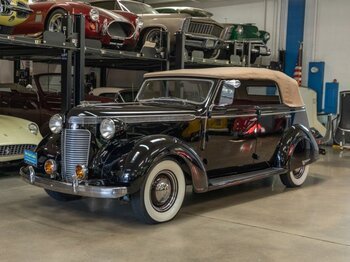