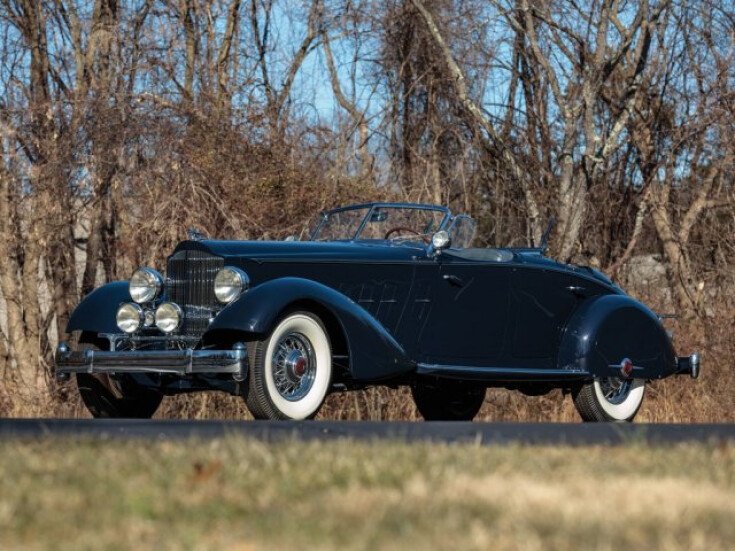 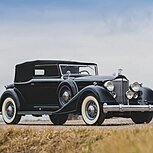 From 1916 23, the Twin Six established Packards leadership in the luxury automobile market. After a hiatus for the model, a new twelve-cylinder Packard returned in 1932, joining Cadillac and Lincoln in the multi-cylinder race. The Twelve powered Packards largest, most exclusive machines for seven years before becoming a fatality of the Depression-era automobile market in 1939. Many of Packards most desirable models, including the truly stunning sport phaeton, come from this storied period of power, streamlining, and exclusivity.

Though all Twelves are highly desirable today, 1934s Eleventh Series cars are especially prized for their graceful, streamlined coachwork which retained the Packard classic upright body stance and the prominent radiator grille with the iconic tombstone-shaped shell. Offered on two different chassis lengths and with nearly two dozen different body styles, the 1934 Twelves were powered by a 160-horsepower, 445.5-cubic-inch V-12 engine backed by a three-speed synchromesh manual transmission. Despite being large and imposing automobiles, the Twelves were capable of speeds in excess of 90 mph and acceleration that could rival almost anything else on the road.

Easily one of the most dramatic of all the Eleventh Series body styles, the 1108 sport phaeton was originally designed by the great Alexis de Sakhnoffsky. Traditionally more conservative in styling that its competitors, Packard was relatively late in recognizing stylings value as a sales tool. It wasnt until 1932 that president and general manager James Alvan Macauley finally accepted the idea and appointed a group of expert stylists, led by Sakhnoffsky, to work with Edward Macauley, Packards in-house styling head. The Murray Body Corporation and LeBaron were also drafted into the mix, the latter already established as a leading design firm, but the main outside influence was Raymond Dietrich.

Dietrich, who had co-founded LeBaron in New York City with fellow designer Thomas Hibbard in 1920, had later formed Dietrich Inc. and begun designing custom bodies for Packard, Lincoln, Marmon, and other manufacturers. One of his most influential designs was for the 1929 Packard 645 DeLuxe Eight, a dramatic concept with a raised beltline, giving the impression of decreased height and increased length. One of the periods great American automotive designs, it dictated the Packard look all the way through the Eleventh Series represented in the 1934 Twelve sport phaeton design seen here.

Working within that famous Packard design aesthetic, Sakhnoffsky wrought his own sensational design, leading with Dietrichs new, taller radiator to his majestic false hood and the sculpted ovoid pontoon fenders that were another of his signature design elements. In contrast to the standard Packard motif, the beads flowing down from the front fenders and around the wheel openings were eliminated, and the running boards were not anchored to the front fenders. From any angle, Sakhnoffskys design is the essence of the sporting phaeton: elegant yet rakish, elements that are masterfully incorporated in this LeBaron-style sport phaeton.

At an invoice price of nearly $8,000 each, the sport phaetons were almost twice the cost of a standard 1934 model. Consequently, it is believed that only four original LeBaron Model 1108 examples were produced. Each was a full custom model built to the exacting tastes of those who ordered it. With the rarity, exclusivity, and incredibly large price tag, only ultrawealthy luminaries such as Clark Gable were able to purchase them in the period. All known examples are featured in prominent, long-term private collections and museums, and none are likely to enter the market in the near future. To experience the sport phaeton on the road, a finely crafted re-creation may be the only available option.

This 1934 Packard 1108 Twelve sport phaeton was handcrafted by master coachbuilder Fran Roxas of Chicago, Illinois, using truly exceptional LeBaron-style coachwork. Completed in 1987, the sport phaeton was finished in stunning blue with matching leather upholstery and impressive details that include dual remote spotlights, Pilot Ray driving lights, wind wings, and wide whitewalls on chromed wire wheels. This is an outstanding way to experience one of Packards rarest and most glamorous offerings. Built with no expense spared, the car was even shown at the prestigious Meadow Brook Concours dElegance, where the judges were so taken by its beauty that it was incredibly awarded Best of Show. The car has been well maintained since, underscoring the quality of the work completed by Roxas. A wonderful tribute to one of Packards finest creations, this sport phaeton remains simply stunning and would be a wonderful addition to any Packard collection.To view this car and others currently consigned to this auction, please visit the RM website at rmsothebys.com/en/auctions/am20. 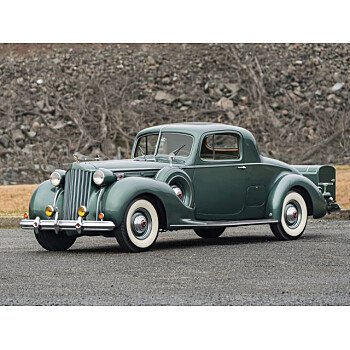 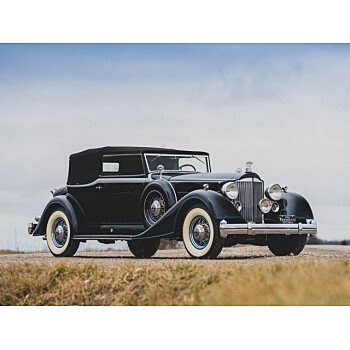