The 32 McGowan Brothers A-V8 was built in 1955-56 by Bobby and Frank McGowan from Branford, CT. Bobby was interviewed on October 6, 1995 and describes the car. I started with a 31 roadster that my brother, Frank and I bought from Edwards Welding Shop in Stoney Creek, CT for $7.50 apiece. I also bought a wrecked 40 Ford coupe for $7.00. At that time, I was in the Cam Carriers car club and we had a club project for a 32 Ford pickup. I bought the project for $20.00, but had to give the body back. A guy named Charlie Hilde Zd the chassis and made the nice wishbones. Jack Crump from Guilford, CT did the body work. I bought the brand new 59AB factory relieved truck block and a used McCulloch Supercharger for power. I used the 40 Ford 3.78 rear end, transmission, brakes and dash. The radiator came from the pickup and the clutch was GM type. I bought the dropped axle from an ad in one of the little Hot Rod books. The master cylinder and clutch cylinder were from 54 Fords and the steering box was from a straight axle Chevrolet. I used 50 or 51 Pontiac taillights. The paint was 53 Buick Tahitian Red and pin striping was done by Jim Tyrell. I raced and showed the car a little bit, but mostly it was my driver. It was in one regional magazine with my redheaded sister standing by the car. In 1997, the McGowan Brothers Roadster was one of the nine restored nostalgia Hot Rods shown on the lawn at Pebble Beach. In 2003, it was one of the featured 1950s Hot Rods in the book Hot Rod Chronicle by Don Prieto and forwarded by Ken Gross. 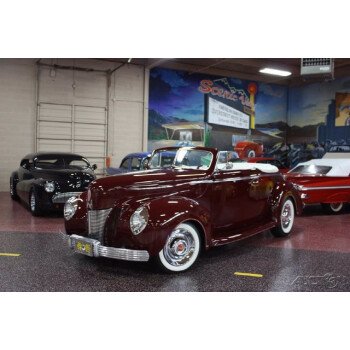