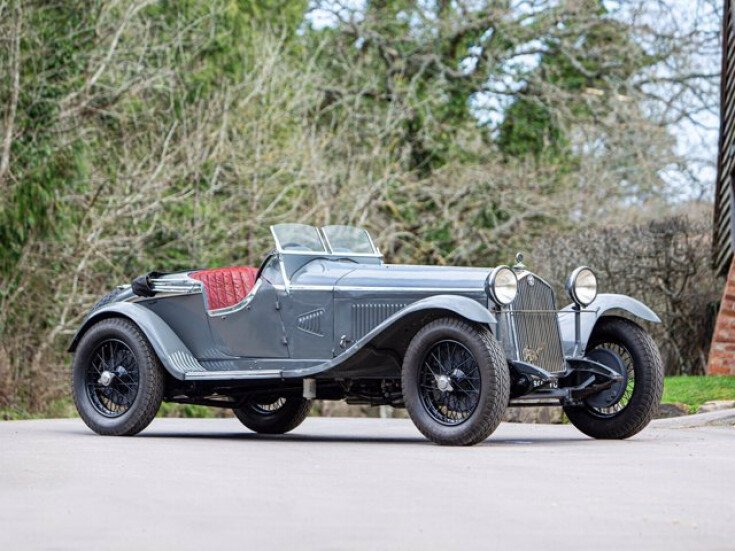 The old adage win on Sunday, sell on Monday could not have been truer for Alfa Romeo in the inter-war years. The Italian marque began to blaze a trail with motorsport success in the 1920s and 1930s, particularly with its P2 racer that scored major victories in Grands Prix around the world, further to winning the Targa Florio in 1930. Legendary drivers such as Tazio Nuvolari, Antonio Ascari, Achille Varzi, and Giuseppe Campari regularly won in Alfa Romeo colours and bridged a personal connection between the company and the public, who were becoming ever-the-more invested in motor racing as a sport. While the companys competitive cars were built for out-and-out racing, aspects of their engineering would feed into Alfa Romeos burgeoning road car model range, and the continued on-circuit triumphs did wonders for the brands image among potential customers, especially in the domestic Italian market.

In the mid-1920s, Alfa Romeo found itself at a crossroads. Its existing models, the RL and RM, could be adapted either for road or motorsport use, but the former was generally considered to be too heavy and relatively underpowered. This led to Vittorio Jano, Alfa Romeos new Head of Engineering, in Milan looking to the 6C as a figurehead for the companys next main platform. The name refers to the models new state-of-the-art OHC in-line straight-six engine and the 6C could be adapted into any one of Cabriolet, Gran Turismo, Sedan, Spider, or Super Sport form, with prominent coachbuilders such as Castagna, Touring, or Zagato offering stylish body solutions.

The first iteration of the model was the 6C 1500, revealed at the Salone dell Automobile di Milano in 1925 using technology from Alfa Romeos acclaimed Grand Prix-winning P2 racing car deploying a single-overhead cam 1,487 cc in-line six-cylinder engine to produce 44 horsepower. The 6C Sport was revealed in 1928, with a DOHC version of the 1.5-litre engine instantly finding acclaim with victory at that years Mille Miglia. One year later, the more powerful 6C 1750 was shown for the first time in Rome, offering a claimed top speed of 95 mph and designed with a chassis intended to soak up the bumps and rattles of rough roads, making it an ideal contender to be a comfortable-yet-spirited road cruiser or street circuit racer. The Super Sport and Gran Sport versions of the 6C 1750 were powered by a dual overhead-cam engine with supercharger and, between the two models, secured Alfa Romeo further Mille Miglia race wins in 1929 and 1930 respectively.

It is understood that 257 examples of the Gran Sport originated out of Alfa Romeos Portello plant in Milan, spanning production from Series IV to VI. This example, a Series V Gran Sport version of the 6C 1750, was completed by the Alfa Romeo factory and sent to the coachbuilder, Zagato, to be finished with a lightweight aluminium competition body. Its first owner was Piero Civita, residing near La Spezia, Liguria, acquiring the vehicle in October 1931 from Auto S.A. of Milan for a declared sum of 65,000 Italian lire. This princely sum represents one of the most expensive body options for the period, with the invoice noting the bodywork as Sport 2 posti or sport two seats .

Important to note is the fact that the Gran Sport was the top of the line offering in Alfas range at the time, with the 5th Series being the final and indeed optimum development of the 6C 1750, the 6th series being unchanged. The final iteration of the model featured a larger, uprated supercharger, other improvements to the engine and a slightly shorter ratio steering box and is revered by many to be the most favoured of the generation. The Gran Sport was the top-of-the-range model and Zagato was the favoured coachbuilder other houses offered coachwork but none were able to match Zagatos lightweight competition bodies point in fact being that it was Zagatos craftsmanship that adorned the works cars. Put frankly, until the introduction of the 8C, an Alfa Romeo 6C 1750 Gran Sport with Zagato coachwork was the finest Italian sportscar money could buy at the time and its dominant competition record only compounds its stature.

In November 1932, the Alfa Romeo was sold to Paolo Grassi of San Remo, who would only retain the car for one month before selling to Guido Ramella of Biella, Piedmont. Fascinatingly, Ramella campaigned the car in the 1933 instalment of Mille Miglia, driving alongside Carlo Portaleoni. Wearing the road registration VC 5964 at the point of its race entry, a letter on file from Ramella notes his appeal to race organisers for special dispensation that would allow him and Portaleoni to compete with the painted white race numbers 65 on the cars aluminium body.

The 1933 Mille Miglia entry list alone was a whos who of contemporary drivers and their respective machinery and the event was won by Tazio Nuvolari in a Scuderia Ferrari-entered Alfa Romeo 8C. Unfortunately, Ramella did not finish the race but a copy of the interim race timings states that he was 2nd in class and 12th overall on the Siena to Rome section so was clearly having a spirited go at it! Astonishingly, Alfa Romeo took a clean sweep of the top 10 with 6Cs finishing 9th and 10th, proving the models competitiveness since the last Mille Miglia victory had not shied away. Alfa Romeos dominance of the Mille Miglia up to 1947 was unlike anything seen before or since at a major motorsport race; for every 5 editions entered, Alfa Romeo would win 4 of them, along with almost countless class wins.

Ramella sold the car within a month of the Mille. Assumedly, hed bought it specifically for that purpose and its job was served, something that was not uncommon for 6Cs. Further Milanese ownership is recorded over the next few years. In July 1937, the car became the property of one Giulio Osmani, an Italian citizen from Recanati, near Ancona on the east coast of Italy who also had residence in Mogadishu, then under colonial control in Italian East Africa, in what is today known as Somalia. As many will know, some of the most significant Italian sports cars of the day also found their way to the Italian colonies so this comes as no surprise. The car was registered there for many years and later found its way to Kenya, where it is understood to have been owned by L.H.F. Armstrong. In the mid-1960s, the car was then acquired by Ian Johnson, an English agricultural engineer working in Kenya for the British government. A newspaper cutting on file shows it was entered by him in the 1966 Esso Trophy, a Kenyan road race, where it finished 1st in its class. Johnson secured a job in New York in 1980, at which time he had the Alfa Romeo shipped to the U.K., then in 1983 the ownership was transferred to his son.

Between then and when it was sold in 2012, the Alfa was off the road and had remained in storage for many years. The current owner purchased the car in 2015 and began a sympathetic and detail orientated rebuild with an aim to extol the virtues of its originality .

Stripped back to a bare chassis, all components were rebuilt and refinished as required a focus was even made on the most minute of details, such as correct specification hardware when it came to reassembly. The chassis and axles were hand-painted and all sub-assemblies received component rebuilds as required. Furthermore, the wiring loom was rebuilt from scratch using correct, period-type braided hardware. Notably the engine, gearbox, and supercharger were outsourced to highly regarded vintage engineer, Simon Bish. Old leather was repurposed to retain an aged feel to the interior, which gels with the original floors and crackle-finished dashboard that houses a complete suite of the correct gauges all again making no apology for their age. The body, painted correctly in cellulose, displays more of a sheen than a shine, again rounding off what we consider to be a tastefully presented car of which inspection is encouraged and welcomed. For the numbers lovers, the car is a most pleasing feast with not only all key components being of correct type (10 million series) and complemented by its original chassis plate. Of particular note are the Zagato body number stampings found in several places among the coachwork.

Today, this 6C presents as one of the more original examples existent, retaining its original gearbox and axles, along with the majority of its original coachwork. Its sympathetic restoration respects the age of this Gran Sport while still remaining eminently useable as proven by the approximate 3,000 miles of motoring covered since it returned to the road. The character and fascinating back-story of this car will appeal for many, while for others this exquisite 6C Gran Sport 1750 presents the opportunity to own one not only a true hypercar of its day but also one of Alfa Romeos first pre-eminent road legal race cars. To be enjoyed as part of a collection, out on the open road or at eligible historic collector car events, the chance to own such a superbly attractive, capable and enjoyable vehicle should not be overlooked.
To view this car and others currently available, please visit the RM website at rmsothebys.com/en/home/private-treaty-sales/. 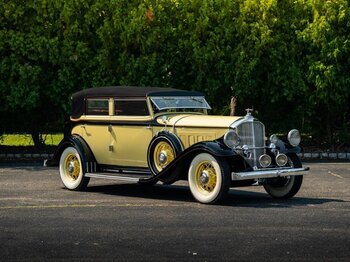 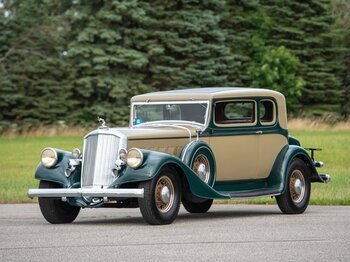 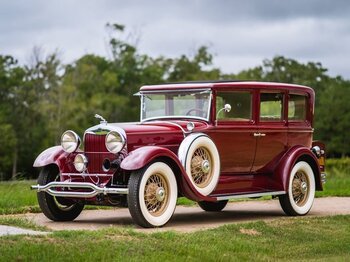 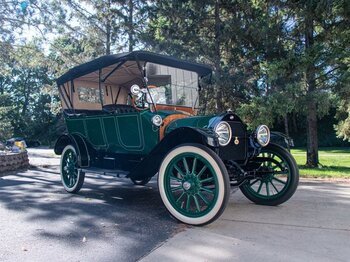