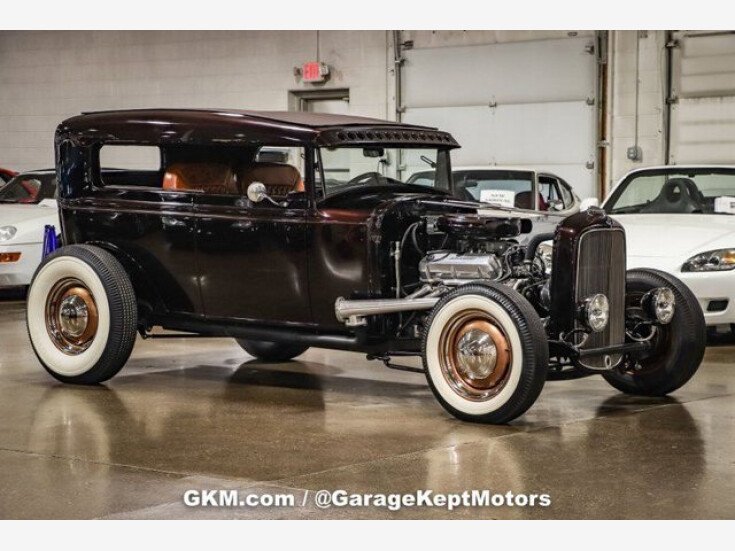 1930 Ford Model A Custom Hot Rod - Professionally Built by Gas Axe Garage - 351ci/400hp Windsor V8 built by Bonefied Customs - C4 Automatic Transmission - Ford 9 Inch Posi Rear End - Front Disc Brakes - Finished in Brown Metallic - Real Leather, Custom Interior - Removable Canvas Top - Classic Industries Gauges - Frenched Model A Tail Lights With so many options and ideas for styling, and custom parts for Model As, it can be a daunting task to come up with an idea for a build and stick with it. The builder of this special Model A seems to have been laser focused on making sure that the vision that he had kicking around in his head, came to fruition. The gentleman who built this car is no stranger to Model As and early-Ford Hot Rods in general. This carefully crafted and thought out Model A is a car that has a special presence thanks to the color combination, design details, and body styling. This build was clearly well thought out and was certainly completed by professionals. One glance at the car, and it is obvious that the roof and doors have been chopped. As the adjustments to the body were taking place, the B-Pillar was deleted, making for a more open side profile. The balance of the car is pleasing to the eye from any vantagepoint. This car is about as smooth and sleek as you can make a Model A before reaching a point that the car is completely impractical. The body is finished in a deep brown metallic paint, which you can see in the pictures was professionally and meticulously applied over the customized body. Tasteful pinstriping was applied by hand throughout the car. Pinstripe adorned headlights are pushed inward a little further than the position on a traditional Model A. Many traditional Model A hot rods tend to have the headlights mounted beside the grille rather than the route that the builder of this car went, which is slightly in front of the grille. The absence of fenders, and an exposed hopped up engine follow along more closely with traditional hot rod styling. At the rear of the car, a set of frenched tail lights, and frenched license plate recess are found just above a pair of thin walled, flared tip exhaust pipes. A unique touch, which we really like, is the polished fuel filler cap. It looks to be a vintage motorsport style cap, mounted on what we suppose could be considered the C-Pillar of the car, although as we mentioned before, the B-Pillar has been deleted. The canvas top section of the roof is removable, which allows the driver to open the cabin of the car up even more. One thing to keep in mind is that the car does not have side windows, so getting caught in the rain could leave you feeling pretty soggy. Another interesting feature of this car are the doors having been shortened just a bit, so that when closed, they sit flush with the rest of the body. Its a small detail that is easy to miss, but is also something that shows the builders commitment to following through with completing the build as it was originally envisioned. Flush doors with the fit and finish as seen on this Model A is no easy feat to pull off. The interior features real leather trim and seating surfaces. Dark brown leather and carpet, as well as dark brown trim on the dashboard nicely contrast with the aged leather trimmed seats and bronze stripe along the dashboard. Speaking of the dashboard, a 56 Ford dashboard was expertly trimmed, sectioned, and grafted in the cabin. Classic Instruments gauges and a banjo steering wheel are other interior highlights. The builder of this car cleverly moved the front seats back further than a standard Tudor Model A, which makes this car a bit more comfortable once seated inside. However, this means that there is no rear seat. The rear seat has been replaced by a custom enclosure which holds a dry cell battery and a fuel cell. A 351 Windsor, which has been treated to a few choice goodies mated to a C4 automatic transm 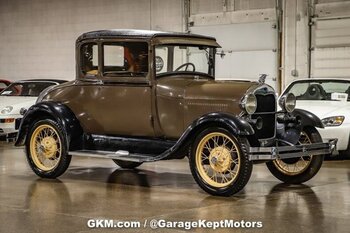 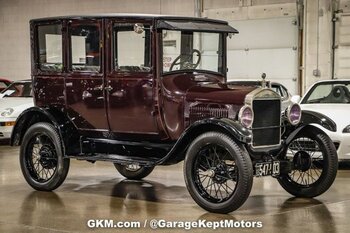 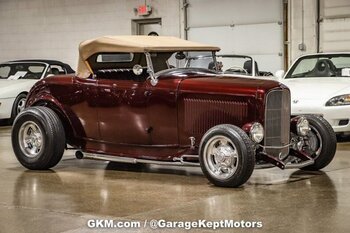 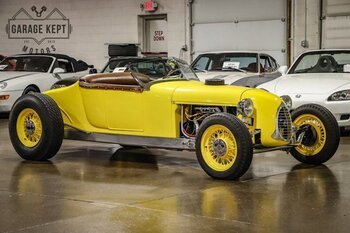