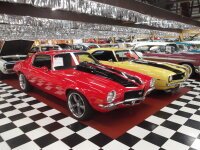 One Of The Family

The buying experience is what makes Volo Auto Museum truly special. But the story doesn't stop there. Volo Auto Museum also consigns cars for outside sellers, in some cases for free if the car is exceptional.