The notion of producing a hybrid sports car in the 1960s was, at its core, quite simple. While British manufacturers retained the edge in styling, road holding and superb braking, American firms held a distinct horsepower advantage. This “best of both worlds” concept was, of course, nothing new. Post-war Allards, Cunninghams, and Nash-Healeys used the same basic premise. Carroll Shelby, however, considered chassis’ from Austin-Healey, Jensen and Bristol before settling on AC, after hearing that the builders of the stylish and sturdy Ace had lost their engine supplier when Bristol ceased production.

Attractive, lightweight and proven, the AC Ace could, by Shelby’s thinking, be turned into a successful production racer by replacing its aging six-cylinder engine with a powerful, deep-breathing V-8. In September 1961, Shelby wrote Charles Hurlock, of AC Cars, to propose a hybrid car using the AC sports car body and chassis. “I’m interested,” wrote Hurlock, “if a suitable V-8 could be found.” Shelby moved quickly when Editor Ray Brock, of Hot Rod magazine, told him of Ford’s new, lightweight small-block V-8. Soon after, Shelby had an early 221-cubic inch example installed in a stock AC Ace. In fact, the V-8 weighed just slightly more than the six-cylinder Bristol.

Ford engineer Dave Evans then offered Shelby an even better solution. A high-performance 260-cubic inch small-block V-8 was already in production for Ford’s Falcon, and two engines would be on the way to him soon. They were immediately sent by airfreight overseas, and on February 1, 1962, Carroll Shelby flew to England to test drive the new Shelby “Cobra.” The rest, as they say, is history.

According to the World Registry of Cobras & GT40s; the 1964 Shelby Cobra 289, CSX2561, was originally billed to Shelby American on August 25, 1964 and was shipped to Los Angeles aboard the SS Alblasserdyk. It was initially used as a demonstrator at Shelby American and was then invoiced to Hayward Ford Motors, of Hayward, California on January 27, 1965. At the time it was originally painted white with a red interior, just as it is currently presented here today. The Registry also states that CSX2561 came with an uncommon C-4 automatic transmission and was sold at a “Factory Demonstrator” price of $5,250.

The first owner of 2561 was Edwin Ovilice, of Oakland, California. By the early 1970s, the car was owned by Jim McCarthy, also from Oakland. The Cobra was later offered by Norm Sinai of Hayward in late 1980. A gentleman named Mr. Cole from California bought the car and then sold it circa 1982 to Donald Mansker of Houston, Texas. Jim Yancey of Paris, Texas next bought 2561in 1983. By this time the car had been fit with a chrome rollbar and had blue interior (both have since been removed and returned to original specifications). The Cobra was next seen being advertised for sale in spring of 1990, then later in 1992 was offered by an auction house. In 1993, the car reappeared in the classifieds and was sold later in the year to Guy C. Eavers from Staunton, Virginia. It is last mentioned in the aforementioned Shelby Registry as being for sale in the December 1996 duPont Registry as completely and immaculately restored with an unwrecked aluminum body, 38,950 miles and the rollbar removed and the interior color returned to its proper red leather.

This example is a standout among its peers. The factory C-4 automatic transmission is quite rare, records indicate that less than 20 examples were sold in this configuration. Ford Mustang floor-shift mechanisms were utilized, as seen in this car. Finished in white with red leather upholstery and red carpet, CSX2561 rides on chromed wire wheels and is shod with Goodyear Integrity tires. It is also equipped with factory accessories that include a soft-top, a spare wire wheel, front grille guard and rear bumper, chrome air cleaner, aluminum Cobra valve covers, adjustable wind-wings, tinted sun visors, competition seat belts, chrome exhaust pipe tips and an outside rearview mirror. Most impressively, this Cobra leaves you with many favorable driving impressions. It is quick, comfortable, tight, and drives very well - all one wants in such a high-performance machine.

The overall fit and finish of the body, paint, upholstery and engine bay is outstanding, with nothing overlooked. There are no blemishes of note on the paint, and the interior is stunning with its black dash and Stewart Warner gauges. Outstandingly presented, CSX2561 is certainly worthy of serious inclusion in the collection of discerning aficionados of post-war American muscle. 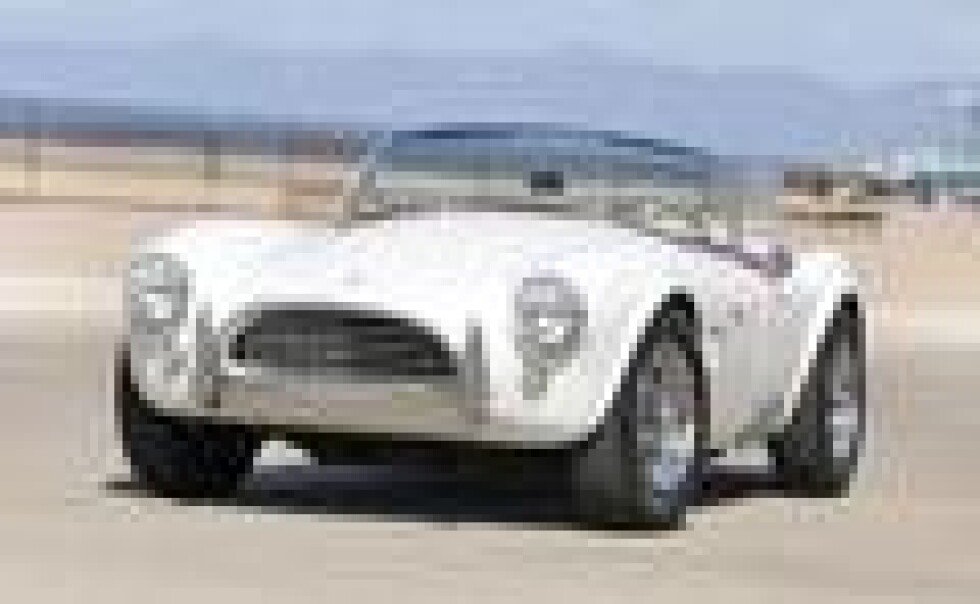