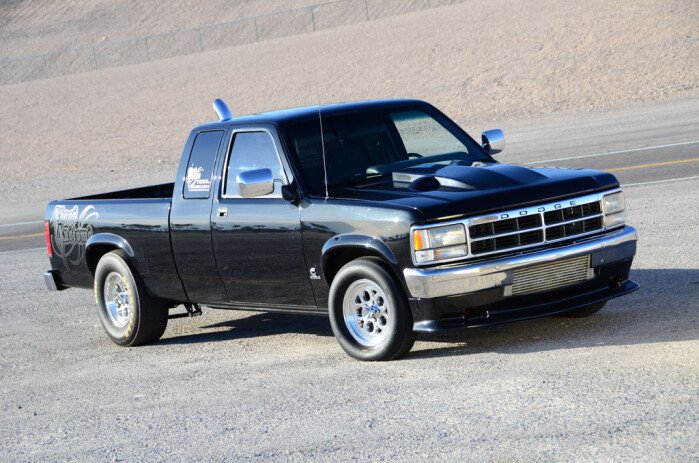 When somebody’s trying to guess the size of an object, they often ask, "Is it bigger than a breadbox?" But in the case of Stephen Grundke’s Dodge Dakota, the question was, "Is it bigger than a bread van?" That’s because he sliced a four-cylinder Cummins diesel out of a bread-delivery truck, and stuffed it into a much smaller pickup—a ’94 Dodge Dakota. To make things even harder, he also puffed it up with a pair of blowers, raising the output many times over the stock setup, as you’ll see.

Diesel fans are already familiar with the six-cylinder 5.9L Cummins, and this 3.9L is basically the same as this popular stump puller, but with a couple cylinders lopped off. Weighing in about a couple hundred pounds less than the six-cylinder 5.9, the four-banger’s compact size, simplicity, robustness and plentiful aftermarket upgrades make the 4BT a popular choice for engine swaps in Jeeps, SUVs and half-ton pickups.

Which leads us to Grundke’s repowering of his mid-size ’94 Dodge Dakota, along with its beastly twin-turbo setup. The gasoline engine in his aging Dakota was starting to burn oil, so he tracked down a 4BT in a delivery van in Vancouver, Washington and bought the vehicle sight unseen for $1750. The van ran flawlessly all the way home to Edmonton, Alberta and Grundke was wowed by its performance, even in stock form, as it pulled over mountain passes without a hiccup.

While the output of 120hp sounds low, it grunts out 265 lb/ft of torque. However, when backed by a three-speed automatic with no lockup, it’s only capable of only 55 mph tops. So once home, after Grundke rebuilt the engine at his shop, Khaos Kustoms, he replaced the transmission with a 47RH automatic from a ‘94 Dodge 3/4 ton 4x4.

Fortunately, the trans also came with the 47RH-to-Cummins adapter plate, flexplate and starter. And his stock Dakota NP231 transfer case bolted right onto the diesel trans with no problems. The 47RH is almost physically the same as the original 46RH that was in his Dakota. The transmission mounted in exactly the same spot so he was able to use all the stock linkages, mounts, wiring and driveshafts.

Once he began pulling out more power, though, he had to make several modifications, such as custom engine mounts, an oil pan to clear the stock front differential, and two-inch drop brackets for the front differential to gain more clearance. The first upgrade was to put in an intercooler, and that required cutting the front bumper to fit it in. The next one was a Holset HE341 turbo off a 2003 Dodge Ram truck, with a four-inch straight-pipe exhaust and Lucas POD injectors. After some pump tuning the truck ran on a local 1/4-mile track and managed a best of 15.79 seconds at 82 mph. On the dyno, the engine was churning out 213 horses and 383 pounds of torque.

Given the B-series Cummins’ legendary potential for power, Grundke wasn’t content to leave well enough alone. He found a used Holset HX52 and worked up a set of twins with the old HE341, by following some general formulas for a similar setup on a 6BT, only downscaled slightly. After finishing that stage of the truck by summer of 2010, the Dakota managed to break into the 14s, running a 14.9 et at 88 mph.

In the Fall, he did some more tuning to the injection pump, installed a Snow Performance water/methanol kit and hit the dyno again, and pulled 285 hp at 590 lb/ft. Turning up the boost-juice even more, he was able could lay down 420 horses and 720 pounds on the dyno. Not only that, he ran a best of 12.93 at 103 mph in the quarter.

Despite these sizzling results, the overworked little 4BT was starting to develop some blow-by and failed another head gasket in August of 2011. So Grundke had the 4BT totally gone through by the technicians at RPS, Inc. in Morinville Alberta. Next he tackled the rest of the drivetrain, obtaining a fully built Extreme Race Transmission from North American Powertrain Components with a Suncoast reverse pattern manual valvebody and trans brake. For the rear diff Grundke built a narrowed Dana 70 with a Detroit Locker, 4:11 gears and 32-spline chromoly axles with 5-on-4.5 pattern and Wilwood disc brakes. Those binders haul down Summit Racing’s Ultra Torch Series 15-inch rims, fitted with Goodyear Eagle drag radials (30 x 9 rear; 27 x 4.5 front).

Grundke still feels the his Dakota needs more time in the oven, and has plans to raise enough dough so his bread-van engine delivers 600hp. 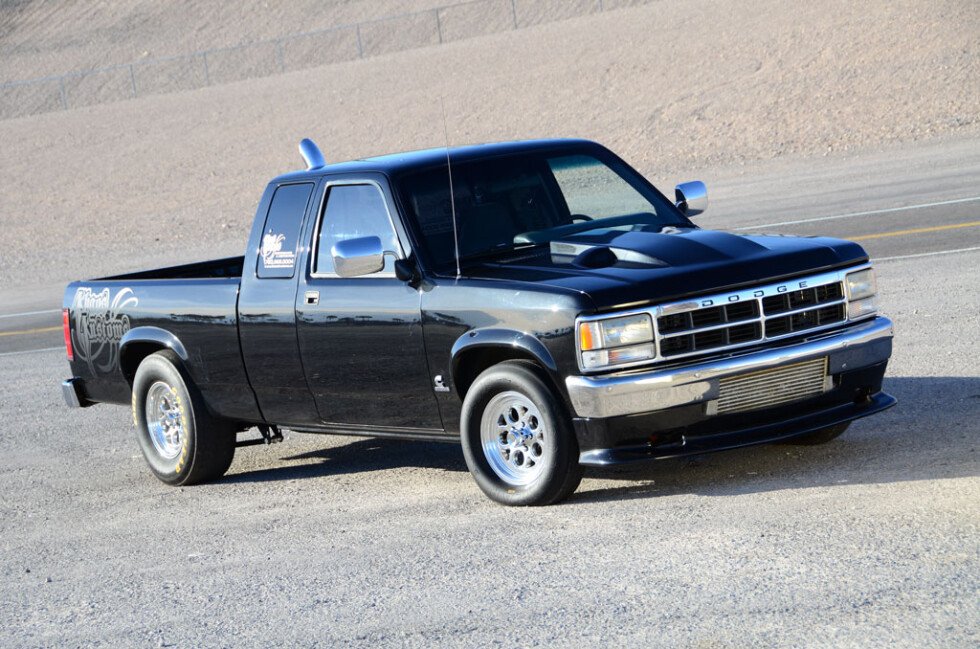