The Jaguar 420G Was No Ordinary Sedan 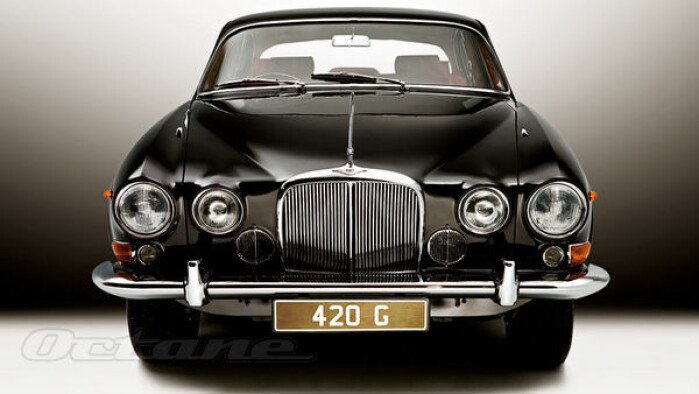 Jaguar Cars Limited has a long and proud tradition of building some of the finest sports cars in the world. With multiple victories at Le Mans and most other important race circuits, Jaguars are instantly recognised by their pace and grace.

But Jaguar’s initial pre-war motor cars were sedans: the 1-1/2-liter Sedan of 1935, followed by the 3-1/2-liter and then the MksIV and V. Jaguar’s special twist was that these were not mere sedans, they were ‘sporting sedans’ that added ‘space’ to that well-known slogan of ‘Pace and Grace’.

When the post-war XK120 was launched at Earls Court to an astonished crowd in 1948, it was the fastest roadgoing sports car of the time, capable (officially) of 120mph. Then in 1951 Jaguar unveiled its next sporting sedan, the MkVII, which was similar under the skin to the outgoing MkV but for one great difference: it used the superb engine from the XK120, creating a true 100mph sedan, a sort of BMW M5 of its day, so effective that it went on to win the Monte Carlo Rally in ’56. The large Jaguars were soon leading from the front of the field in sedan car racing; Stirling Moss and the gang were seen having huge fun broadsiding the leviathans around various tracks, much to the consternation of drivers in more diminutive racing cars.

As the XK was developed into the 140 and 150, Jaguar’s sporting sedans evolved into what became known as the Mk1 and then – the bank robbers’ favorite – the Mk2, especially with the fast and furious 3.8-liter engine fitted. But in 1961 Jaguar launched the gigantic MkX, which became the 420G. The one you see here is a 1969 model.

The 420G is a gentle evolution of the MkX, with differences confined to the bigger 4.2-liter straight-six replacing the previous 3.8-liter; a chrome strip down each flank; a larger front grille with a vertical central bar splitting it in two; and side indicator repeaters added to each front wing. And forget any notion of it being a sporting sedan. This was a sporting limousine!

That was a move away from the usual fare but the parallel remains today with Jaguar’s latest long-wheelbase XJR with supercharged 5.0-liter V8: a limo fitted with the hottest sports car engine. It’s an idea that works now but, unfortunately, in the 1960s the sporting limo did not really take off. Although the big Jaguar was fitted with the 265bhp E-type Jaguar engine, it was still a big bus and not as fast as the Mk2. And anyway, plutocrats wanted a sedate drive, not a white-knuckle ride. Leave that to the bank robbers.

When the MkX was launched in Britain in 1961 it looked absolutely enormous, with plenty of room for six large passengers. British motorists were not really used to such large machines and those who wanted limos tended towards the Rolls-Royce Silver Cloud and then the Shadow. Also, Jaguar launched the more modestly sized S-type in 1963, followed soon after by the smaller 420, an S-type with the 4.2-liter engine and nothing to do with this 420G. On the flipside, in Jaguar’s most important market – America – the big Jaguar was a bit too compact in comparison with the very large full-sized sedans of the time. Too big for Britain, too small for America.

The 420G’s styling is low-key and almost apologetic as it does its best to disguise its huge dimensions. It is clearly a Jaguar but of the fat cat variety and must have looked rather old-fashioned in America at a time when cars were becoming upright, taut, razor-edged and confident after the voluptuous lumps of the 1950s. The result was that only 24,000 MkX/420Gs were sold in total, not many compared with some 70,000 E-types, and nowhere near the 84,000 Mk2s.

As with many sedan cars, their survival rate is low as they are seldom cherished like classic sports cars. So it is rare to find a 420G in good condition and even more surprising to find one that’s totally exquisite. But, then, this one is rather special.

Classic Motor Cars Ltd (CMC), based in Bridgnorth, Shropshire, is well-known for its first class Jaguar restorations and most recently the resurrection of the unique and important Lindner Nöcker Low Drag Lightweight E-type. Managing director Nick Goldthorp – previously of Vicarage, which was known for its restoration and improvement of Mk2 sedans – is, not surprisingly, a sedan car enthusiast. Although his everyday car is a sinister-looking Chrysler 300C, he likes Jaguar sedans in particular, so he was just the man to oversee the restoration of this 420G.

With a team of 27 skilled specialists, CMC produces some really lovely work and knows exactly how far to go when improving or enhancing Jaguars for its customers. In the case of this 420G that meant restraint, as the car did not need much improvement at all.

Bought new by the family that still owns it, the 420G remains in its original livery of Masons Black with St James Red interior. The limousine has resided in a warm and dry country so it was in solid, if tired, condition when it arrived at CMC for restoration. Now that it is freshly repainted and retrimmed the Jaguar looks spectacular – so good we decided it warranted photographing in a studio to show off its finish and condition.

Jaguars were always built down to a price but that does not show on this example. The door and panel gaps are tight and perfect and the gently curving bodywork is absolutely smooth, finished in unforgiving jet black. The styling is very cleverly done to reduce the impression of size but in today’s world, where cars are generally much larger, the 420G looks appropriate for its limousine status. The only visible move away from originality is the 15-inch wheels (up from 14in), shod with modern Pirelli P4000 tyres. The detailing is beautifully understated, with a small Jaguar ‘leaper’ on the bonnet, hubcaps, and small, discreet twin tailpipes. The chromework looks deep and solid because it has been done properly: triple-plated over copper, Nick explains.

The dark black exterior is enlivened when you open the door to reveal the red leather within. Many 420Gs had vinyl interiors – not for cost-cutting reasons, but because it was the fashionable new material of the day – but this car has been reupholstered in beautiful period-correct Connolly leather that emits a delicious aroma. The seats have been subtly improved for increased comfort and the rear bench has been converted to two plush armchairs. Set off by the deep and glossy burr walnut dashboard and door cappings and a smart array of formal Smith’s instruments, the Jaguar’s interior is a place in which you want to spend a good deal of time. Then you notice the gearshift lever between the seats, not the usual automatic wand on the steering column. This car is manual and it is fitted with that 265bhp E-type Jaguar engine. Hmm, there could be more to the old thing than just its superb condition.

Yes, under the rather comfortable bodywork you will find the running gear from Jaguar’s most successful sports car. As well as the E-type’s lusty twin-cam straight-six and all-synchro manual four-speed gearbox, there are servo-assisted disc brakes all-round, with independent wishbone front suspension and twin-coil-sprung wishbones on each side at the rear, too. Steering is recirculating ball but with variable-ratio power assistance.

Because the 420G was so advanced for its time, CMC has not needed to modify much of the mechanicals. Improvements have been targeted at greater efficiency and reliability, so a modern alternator is fitted as are a stainless steel exhaust, upgraded engine cooling and modern air-conditioning, as well as the modern rubber, already mentioned. An up-to-date audio system is cleverly secreted away under the dashboard and that’s it.

Every car that is restored by CMC is subjected to a 500-mile test drive and shakedown so, even though the winter weather is filthy, Nick hands me the keys and we climb aboard. The driver’s door is not that large but once you’re in the driving seat the view across the large hood is commanding. The engine fires quietly at a stab of the dashboard-mounted button and the standard-specification clutch pedal is light and easy. The gearlever moves about the gate in quite large throws and the throttle pedal is soft.

The initial impression is one of solidity and pliant progress: the Jaguar is soft but not stodgy, with impressive mechanical refinement, and soon we are motoring along the lanes in comfort and at speed. Yes, it remains a big car but, once you get used to it, the size begins to matter less. For that, you can thank accurate power-assisted steering and the reassuring brakes. The car leans into bends but the Pirellis grip and the chassis is balanced and vice-free, while the engine has a huge amount of torque so moving along briskly is easy and done in a quiet manner.

Obviously this big Jaguar is not fast by today’s standards but period road tests clocked it at 120mph, with 0-60mph in 11 seconds, which is not shabby for a limousine that weighs the best part of two tons.

Since the owner of this graceful car will be spending most of the time being driven, it was worth trying the rear quarters for size. Yes, that’s the seat you want. The comfort is superb, with ample legroom and a good view of the dashboard and sumptuous interior. The 420G makes a good fist of being sporting, but it is impeccable as a limousine and this is undoubtedly the best example of its kind in the world. A class act, beautifully executed.

Advertisement
×
The Jaguar 420G Was No Ordinary Sedan 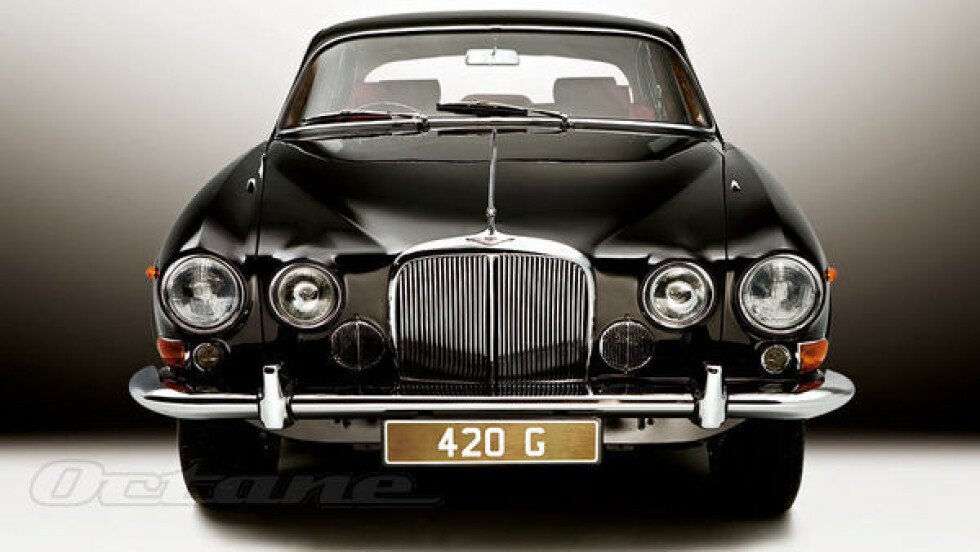